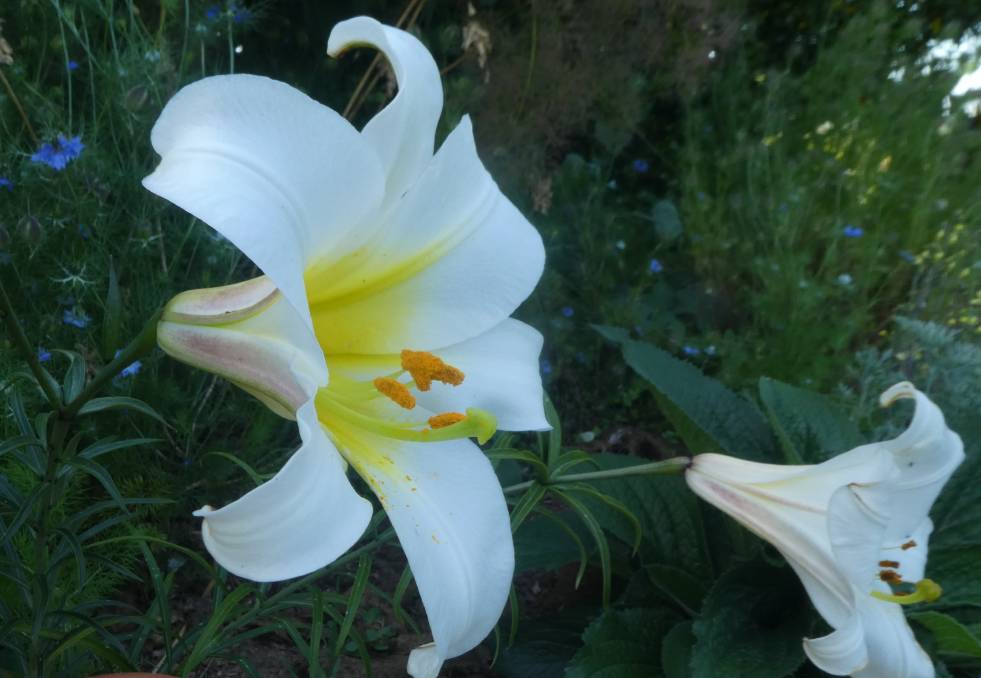 Frost-hardy Madonna lilies grow well in many regions of NSW as they enjoy hot summers and winter rain. Lilies grow well in pots, the bigger the better, small pots can easily get too hot. Fertilise regularly for spectacular blooms.

Lilies add glamour and opulence to a flower arrangement like no other flower.

Lilies add glamour and opulence to a flower arrangement like no other flower.

Every autumn I plant lily bulbs hoping for a few glorious flowers for Christmas Day and if they're too early or late, no matter, I still love them.

Several lilies (Lilium sp.) flower around now including November or Christmas lilies (L. longiflorum), regals (L. regale) and - appropriately for the season - the lovely Madonna lily (L. candidum) that has been cultivated around the Mediterranean since at least 1500BC.

Madonna lilies were my first out this year, the heavily fragrant, large, flared white trumpets opening in early December.

Unlike most lilies, Madonnas like alkaline soil and a climate of dry summers and winter rain.

These lilies were in the garden when we moved here and flourished undisturbed for many years.

Then the atrocious spring of 2006 wiped them and I ran into a problem finding replacements, until last February Diggers (www.diggers.com.au/) came to my rescue.

Unlike most lilies, which are bulb- and stem-rooting, Madonna lily bulbs produce roots from their base and should be planted no more than 25 centimetres deep.

I put mine facing east in full sun, maybe the reason they flowered early.

Meanwhile, the November lilies I'd moved into a shady corner are coming into flower now.

This lily also has pure white flowers but with a longer, narrower throat and less reflexed petals than L. candidum.

It belongs to the stem rooting lily group so bulbs need to be planted deeper, to assist the rooting pattern. It prefers acid soil.

My final lilies at Christmas are the regals, with large, scented, crimson-streaked trumpet flowers with white throats.

With luck they're also about to open.

I've loved this lily since reading how plant hunter Ernest Wilson discovered it in western Szechuan in the early 20th century.

Several of his expeditions to collect bulbs failed for various reasons but finally in 1910 success was his.

Unfortunately, disaster struck on Wilson's return trip when, on a narrow path 100m above a river gorge, he was hit by a rock avalanche that broke his leg.

Despite intense pain he set his leg using a camera tripod and together with his precious cargo was carried back to Chengdu.

During the three-day slog, the party met a mule train coming along the 2m wide path from the opposite direction, but Wilson's bearers laid his stretcher across the path and the sure-footed mules stepped neatly over him.

His leg recovered but was slightly shorter, and so Wilson referred to it as his lily limp.