Weaner heifers attracted plenty of spirited competition and topped at $1730. 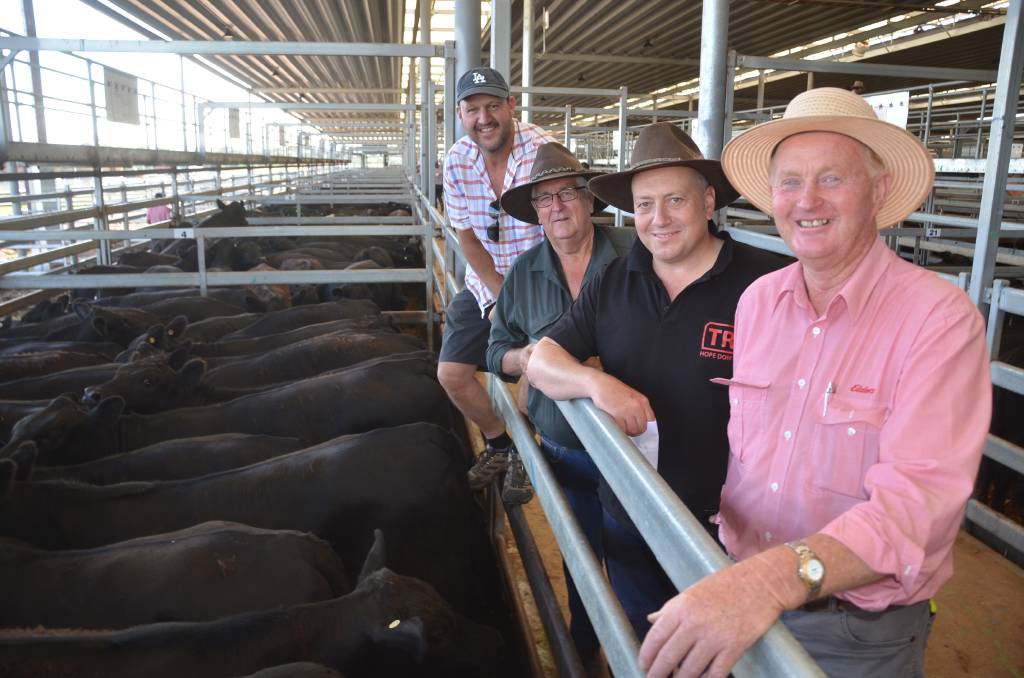 DEMAND for quality Angus and Angus-cross weaner steers and heifers was running red hot during the first day of weaner sales at Wodonga's Northern Victoria Livestock Exchange on Tuesday.

A change in selling format meant the traditional weaner sales held across two weeks were instead slotted into an action-packed selling bonanza across four days.

Buyers from both Victoria and NSW bid up big via the online selling platform StockLive and in person on the buyers' rail for the 1818 head up for grabs.

Weaner steers surged to a whopping $1980 a head, while weaner heifers attracted plenty of spirited competition and topped at $1730.

On a cents a kilogram basis, Elders Albury agent Brett Shea said the bulk of the heavy weaner steers sold from 430c/kg to 470c/kg, while the 330kg to 400kg weaner steers ranged from 465c/kg to 530c/kg.

Strong bidding pushed the top-priced weaner steers to $1980 for the first and third pen of true weaners.

The slick-coated first pen were 469kg, seven- to nine-month-old Angus steers bred by P and A Caponecchia, Bobinawarrah, Victoria. These steers were Jarobee Angus blood and unweaned.

The third pen, also at $1980, were sold by AM Wallace, Porepunkah, Victoria. Weighing in at 460kg, the nine- to 10-month-old steers were Witherswood Angus blood and unweaned.

The top-priced pens of weaner heifers set the bar high for the first two pens sold.

The first pen was sold by McGuffie Glenburn, Buffalo River, Victoria. This pen of 413kg Jarobee Angus-blood heifers were unweaned and aged eight to 10 months.

The second pen to top the heifer market were sold by P and A Caponecchia, Bobinawarrah, Victoria. At seven to nine months, they tipped the scales at 427kg, were Jarobee blood and not weaned.

There was plenty of interest in the ribbon-winning best-presented pens.

Best-presented pen of weaner steers was sold by Mitchell Pastoral Company, Bethanga, for $1915/head. The nine- to 10-month-old weaned Angus steers weighed an average of 364kg. The beefy vendor-bred pen was based on Rennylea bloodlines.

In the heifer section, the best-presented pen sold for $1720 and were unweaned, eight to 10 months, sold by Rylin Pty Ltd, Bobinawarrah, Victoria. This quality pen of potential future breeders weighed 364kg and boasted Witherswood and Jade Park Angus bloodlines.

One pen of yearling steers (sold before the start of the weaner pens) hit $2170 a head. They were 17 to 18 months, tipped the scales at 476kg and were sold by Greg Tallent, Rockview, Burrumbuttock.

Local competition along with bids from Wangaratta in Victoria, the New England, Barraba, North Star, and Tamworth were notable buyers at the rail and online.