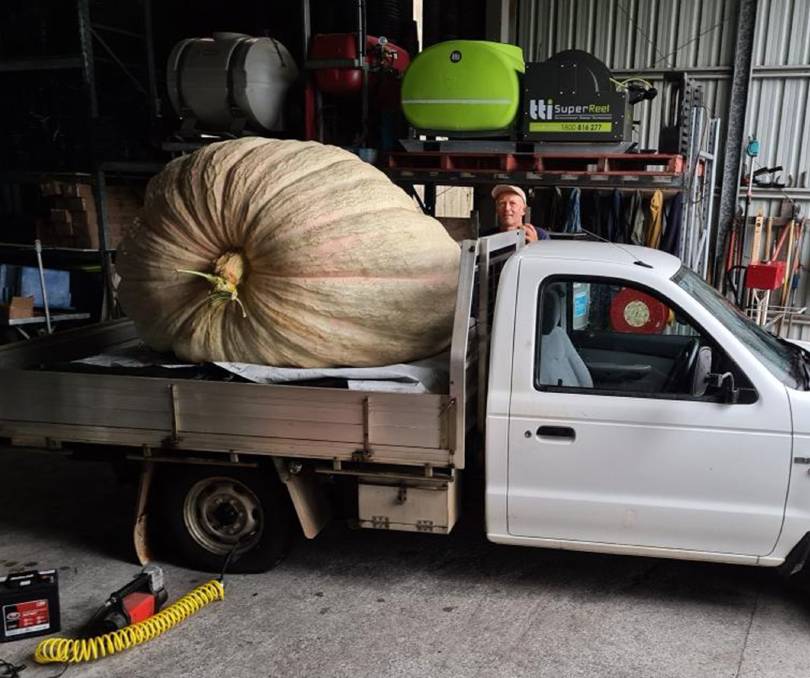 A giant Atlantic variety pumpkin grown by North Coast nurseryman Dale Oliver, Knockrow via Bangalow, has claimed the southern hemisphere record at 867 kilograms after a spectacular public weigh-in at Kyogle on Saturday.

The sub-tropical season has not been particularly kind to growers of the enormous gourd. While there was more water in the creeks compared to last year the acute heat and dry that accompanied spring was more brutal than expected. As a result there was little other competition on show in the main street of Kyogle where the event is held every year, except of course the two watermelons - respectively weighing 21 and 18kg.

Mr Oliver is no stranger to the competition, having honed his techniques over many years.

In 2015 he set an Australasian record with a Giant Atlantic pumpkin weighing 743kg. Seeds from that champion created the current winner. In intervening years the heaviest giant pumpkin in all of the southern hemisphere went to New Zealand then South Africa before returning to our shores.

Mr Oliver said bringing the planting date forward to August 7, 2020 gave the vine an extra 20 days of growing before the heat of early summer began to take its toll.

"We usually plant in September and were lucky to get a 60 day growing period," he said. "This year we started earlier." 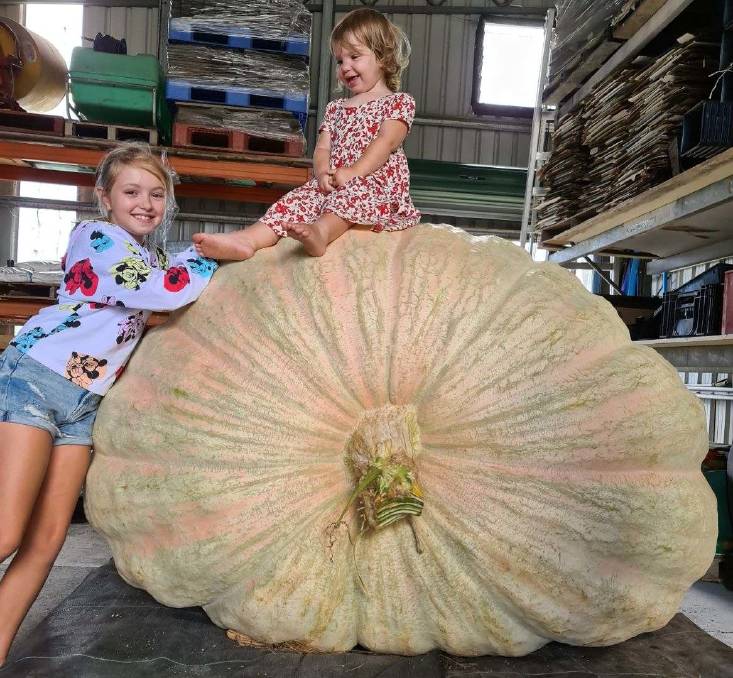 Nieces of Dale Oliver, Ruby and Bella, were dwarfed by the new record pumpkin, weighing 867kg.

Young pumpkin plants are planted in a polyethylene tunnel and by the time runners are growing out of it the structure is taken away.

"You have to open the tunnel or you will cook it," he said.

"When you plant later the pumpkin gets to a reasonable size and then the heat hits and they slow down. The tips of the vine get burnt. We use mulch to try to overcome that but the ultra violet light burns the ends off the runners."

Mr Oliver culls fruiting to one per plant and measures the gourd's girth with a flexible tape every five days. This year's pumpkin circumference was bulging at its peak by 127cm in five days but when the heat arrived that figure slowed to 76 cm then 33cm during a scorching week.

Mr Oliver was reluctant to guess the giant's mass ahead of the official weigh-in at Kyogle.

"You don't know how hollow they'll be," he said. "But this one did well. It put on an extra bit of weight."

You don't know how hollow they'll be, but this one did well. It put on an extra bit of weight. - Dale Oliver

The official weigh-in number of 867kg equals 1910 pounds which puts it tantilisingly close to the US tonne mark, or 2000 pounds - a much sought after target for the best growers in places that have short, sweet growing seasons with an awful lot of daylight.

Rukenvale dairyman and giant pumpkin grower John Leadbeatter adopted a spare plant propagated by Mr Oliver and it kept pace with it's coastal sibling - until a mouse gnawed a hole in its belly and the rot began.

"I kept it dry with a portable fan and a rechargable battery," Mr Leadbeatter reported. "But when the rains came it was all over."

Mr Leadbeatter plants pumpkins into a wallow of nutrient-rich soil prepared the year prior.

For next year's competition he will erect a 70 per cent shade cloth to help keep temperatures and UV light away from young pumpkins.