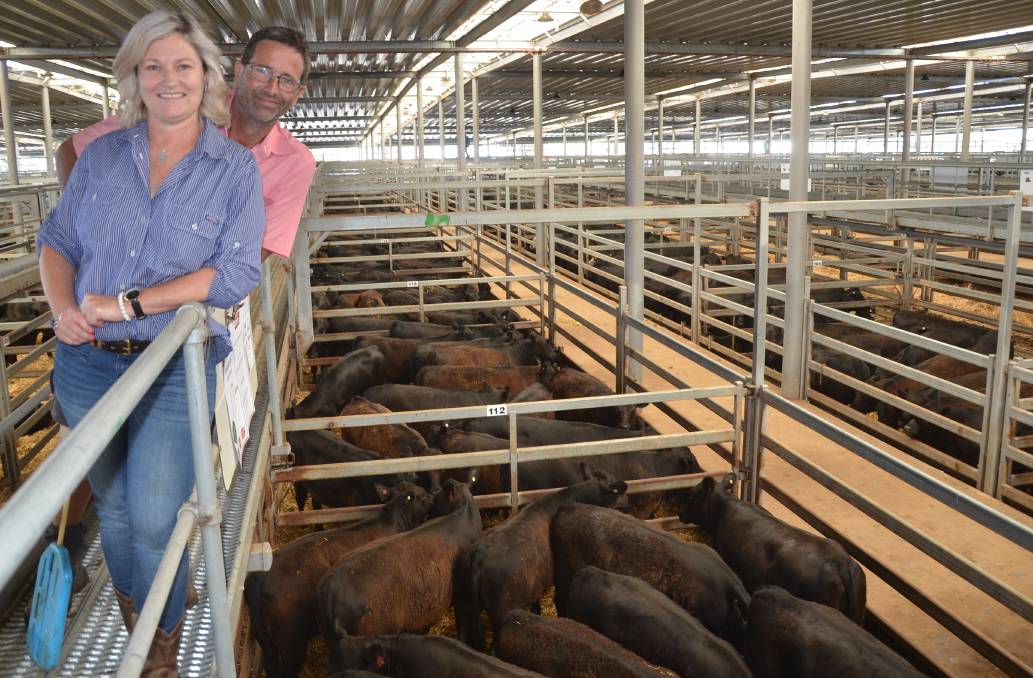 David and Donna Martin like to be able to tick as many boxes as possible with their cattle, so they have the flexibility to sell them into a variety of markets.

The couple run 50 Angus cows on their pasture improved property and turn off mainly weaners in January.

They consider themselves new to farming, having bought their 80 hectare block 11 years ago, however they're both from farming families.

"This is our first property that's ours to run as we want to," Mrs Martin said.

Though both have off-farm incomes - Mr Martin works in construction and Mrs Martin is a property manager in Wodonga - they are passionate about giving their cattle the best life possible and remaining profitable.

"We like to be able to tick as many boxes as possible with the cattle, so we have the flexibility to sell them into a variety of markets," Mr Martin said.

That's part of the reason they went with Angus instead of a larger framed breed.

"Angus work well on our country, they sell well in the saleyards and assuming the specifications are correct, processors will pay top dollar," Mrs Martin said.

Ticking as many boxes as possible was also why they invested in joining the Greenham NEVER EVER Beef Program - which they said aligned with their existing cattle production ethos.

"I think the only thing we weren't doing before we joined the program was using pain relief at marking," Mr Martin said.

"And that's [the oral pain relief] been a successful transition for us and the cattle. No longer do the cattle sulk in the corner after marking; they're back with mum and there's much less stress."

In a nutshell, the Greenham NEVER EVER Beef Program promotes premium quality natural grassfed beef from producers across southern Australia. Producers in the program are accredited and audited to also ensure they don't use hormones or antibiotics, are never confined to feedlot and are Meat Standards Australia certified.

"The program gives us another option to market our cattle," Mrs Martin said. "And it's not restrictive either."

"Even if we treat an animal for an infection with antibiotics, we don't get penalised when they are sold.

"The animal is tagged, still bought by Greenham, but gets diverted into another beef product line."

Having a small herd, the couple realise they need to be flexible to cope with sudden market changes.

"Some of our cattle this month were sold via StockLive and I think COVID has brought forward the use of online selling by five years," Mr Martin said. "We need to be able to adapt.

"By having high animal welfare standards on farm we are also able to set the agenda with the beef consumer, rather than being told what we should be doing."

In the black without the blackberry

It's said to make money in real estate, buy the worst house in the best street.

The equivalent when it comes to rural land would be what Sandy Creek graziers David and Donna Martin did: they bought the worst block of land in the district.

Just over a decade ago, their land was covered in blackberry and other weeds such as Bathurst burr, it had been years since superphosphate had been spread and any infrastructure and fencing was in dire need of attention.

Now they run about 50 Angus breeding cows, turning off "happy cattle" under a plan to run a sustainable enterprise with the highest possible animal welfare standards.

"For the first few years we leased out the land to give us time to get the country into better shape," Mrs Martin said, while reflecting on the countless litres of herbicide they used just to get the blackberry under control.

"We also went in with some neighbours to share the cost of hiring a helicopter to spray weeds and a plane to spread super," Mr Martin said.

To establish their breeding herd, they started with heifers using low birthweight bulls and then retained the females in each calf drop.

"Temperament is one of our key priorities, along with all the regular structural and carcase traits everybody selects for," Mrs Martin said.

They said having quiet cattle to sell meant less stress, which bodes well across a variety of markets - from restockers buying the heifers through to processors wanting tender meat with good colour.