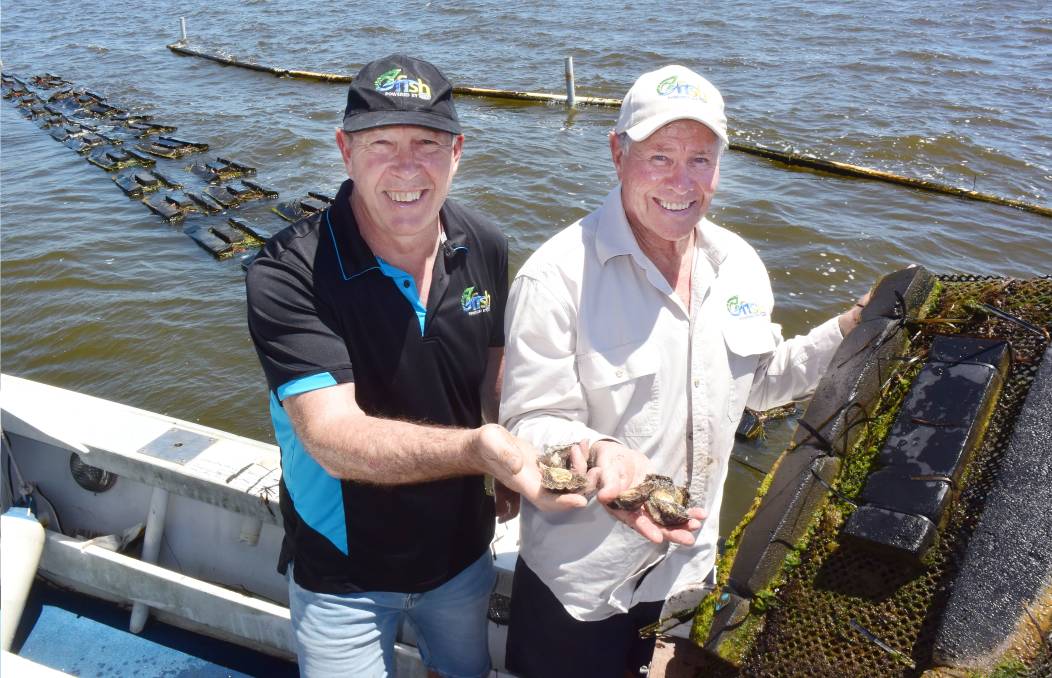 Craig Copeland and John Larsson from OzFish Unlimited with a new variety of rock oyster that could revitalise a dying aquaculture industry on the east coast.

Water pollution in the Richmond River is killing off Sydney Rock Oysters but a new variant is immune and could bring back river health and employment.

Heavy rains in December delivered dirty water to all oyster growers on the North Coast and brought production to its knees in places like the Macleay River after an outbreak of deadly QX disease.

The single celled protozoa behind the affliction affects stressed Sydney Rock oysters and can be traced back to floodplain management that favours the farmer not the fisher.

On the Macleay at Jerseyville grower David Smith lost 95 per cent of his stock when the outbreak occurred before Christmas.

"We're on our knees," he said, wondering when the next disease event would occur. The last on the Macleay was 2004.

Further north on the Richmond, QX is so rampant that stocks of Sydney Rock fail to reach maturity most years. Oysters haven't been grown from spat to maturity since 1976 and 27 leases have dwindled to three.

The Richmond has long been influenced by floodplain drainage and more recently by horticulture on higher land.

All that organic matter washing into the river gobbles up oxygen. The problem is exacerbated by soil geology and oxidisation. Acid water has been recorded at a low of pH 2.09 at Tuckean Swamp.

This combined with excess sediment and associated chemicals from the upper catchment makes it harder for fish and oysters to survive.

"In 2015 it was difficult to find any Sydney rock Oysters. They were all gone," recalls John Larsson, a retired engineer who has poured his efforts into helping establish a local OzFish Chapter, part of a network of recreational anglers who undertake citizen science designed by scientists to take recommendations to government to be undertaken by fisheries to restore river ecosystems.

Together with CEO and founder of OzFish Craig Copeland, and corporate partner BCF, the organisation now covers coast to coast with more than 2000 members who promote their motto "Better habitat. Better fishing."

For commercial oyster growers the work OzFish is doing directly helps their industry along with bringing back valuable natural oyster reef fish habitat to the Richmond estuary.

Ian Cardow used to grow oysters in North Creek and Mobbs Bay, near Ballina but his business is now a retail outlet after too much loss of growing stock in the river. He buys in adult oysters before shucking and selling them fresh to eager customers. Many of those beg him for locally grown product.

But there is hope. Nature has recently intervened to create an oyster that appears to keep the dangerous protozoa behind QX at bay.

After collecting specimens of this apparent Sydney Rock variation, OzFish made them available to researchers at NSW Fisheries' quarantine breeding facility at Port Stephens with propagated spat returned to the Richmond in mid 2018. They are now more than two years old and have survived successive QX outbreaks on the Richmond while Sydney Rocks growing adjacent have succumbed.

Meanwhile humans have been busy propagating the variety, with initial efforts driven by the Richmond River chapter of OzFish Unlimited.

To help maintain an oyster industry commercial growers like Mr Smith at Jerseyville have the support of NSW Fisheries which has invested in breeding a QX resistant Sydney Rock oyster which grows to maturity in 18 months.

The quicker turnover benefits business and reduces the risk of experiencing a QX outbreak during the oyster's lifetime.When it comes to surviving QX the Richmond variety does it better, hands down .

Mr Smith is betting both ways and has ordered 20,000 dozen spats of the fast-growth variety and 50,000 dozen of Richmond to see how they grow.

Education facilities like Southern Cross University are getting involved in research but a lack of bio-secure hatchery facilities limits the genetic pool available to breeders on other parts of the coast.

Camden Haven Hatchery owner Tony Troup says there is no doubting the fact that the quicker maturing variety developed at Port Stephens is a favourite among commercial growers in clean the estuaries, but for those on the northern rivers and the Hawkesbury, where QX resides, this new natural variety could well be a saviour.

"It's amazing that it survives," he said.