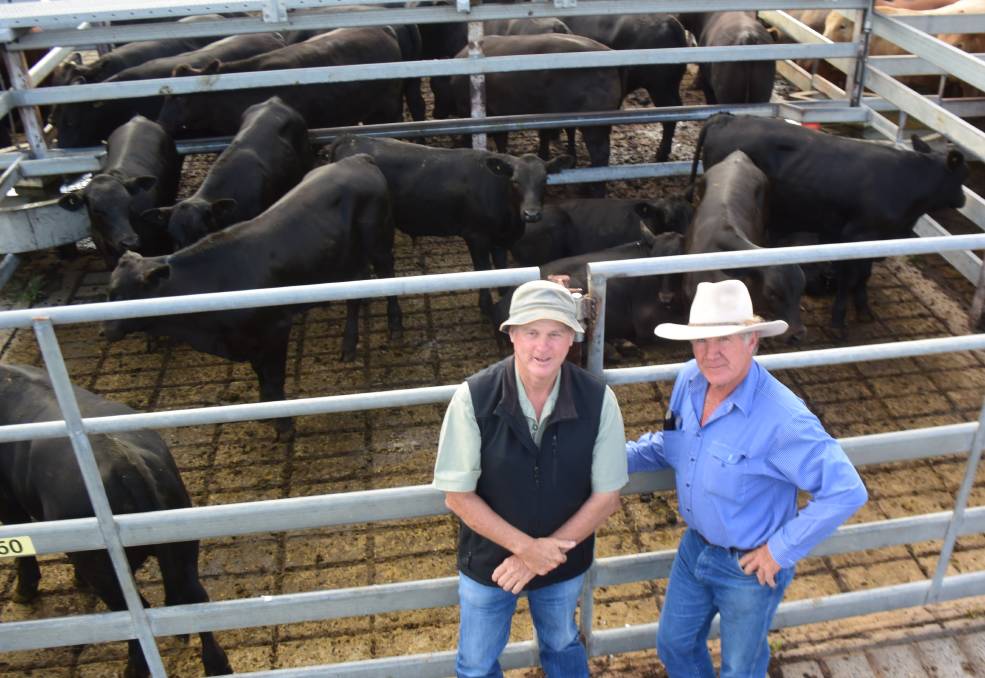 Peter Trow and and John Newberry, Glen Innes, came to Grafton to buy cattle in the 450c/kg range. They are pictured here with Angus/Brahman steers, 257kg, from Bernie Kelly of Colletts Island, Ulmarra, which made 586c/kg or $1502 going to Scone through Elders.

Producers wondering if the price momentum of 2021 would continue this week were left wondering why they didn't consign cattle.

Cattle producers wondering if they should have consigned cattle at Thursday's Grafton store sale were left wondering why they didn't book a carrier as prices continued to impress.

"I needed backgrounding steers this year, after the drought and floods, but I found them too dear so I've gone about it in a different way," said Chris Golding, with country at Coaldale and Baryulgil. He purchased 11 brindle Brahman/Hereford first cross cows with Charolais calves at their shoulder, bred by Jeff Archer of Coombadjha Pastoral, for the top money of the day. The small herd will stock new leasehold country at Southgate, managed by his daughter and son-in-law.

"But I need steers so I'll spin those off pretty quick," he said. "And after the cows put on weight this summer I'll spin them quick too, unless some test in-calf - of which I'm sure there is." 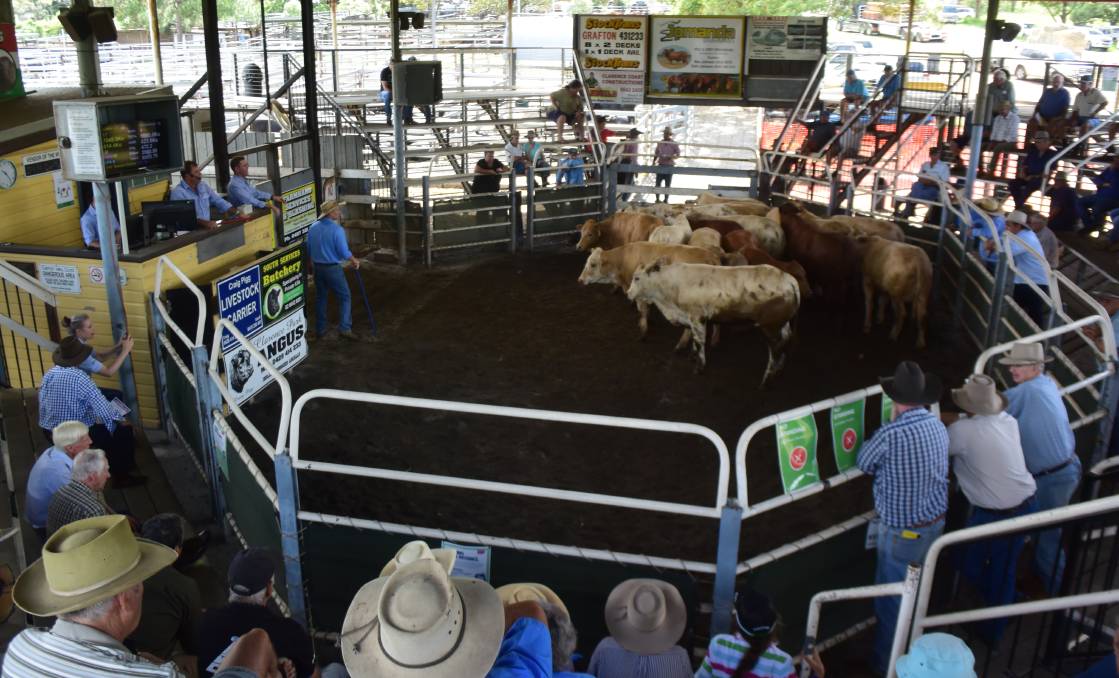 Backgrounder and grass fattener Peter Trow, Glen Innes, was another at yesterday's sale who plans to make money out of the present remarkable prices, setting himself a target of about 450 cents a kilogram as a reference point.

He bought cows in August for 340 cents a kilogram and discovered some were in calf before returning good money after 150 days. Yesterday he bought black steers, 400kg, at 450c/kg and plans to make a positive return with the remainder of the short growing window on the Northern Tablelands.

"If I was to buy at 550c/kg I would have to put 60kg on for nothing and by that time our season would be over," he said. But if you're careful and selective there's money to be made."

Also in August, Russell Connor of Cowper paid 526c/kg for black steers, 160kg, and sold them at Grafton yesterday weighing 319kg for the same cents.

"You've got to get the kilos on them quick," he said. "And that is why this season is driving the market." 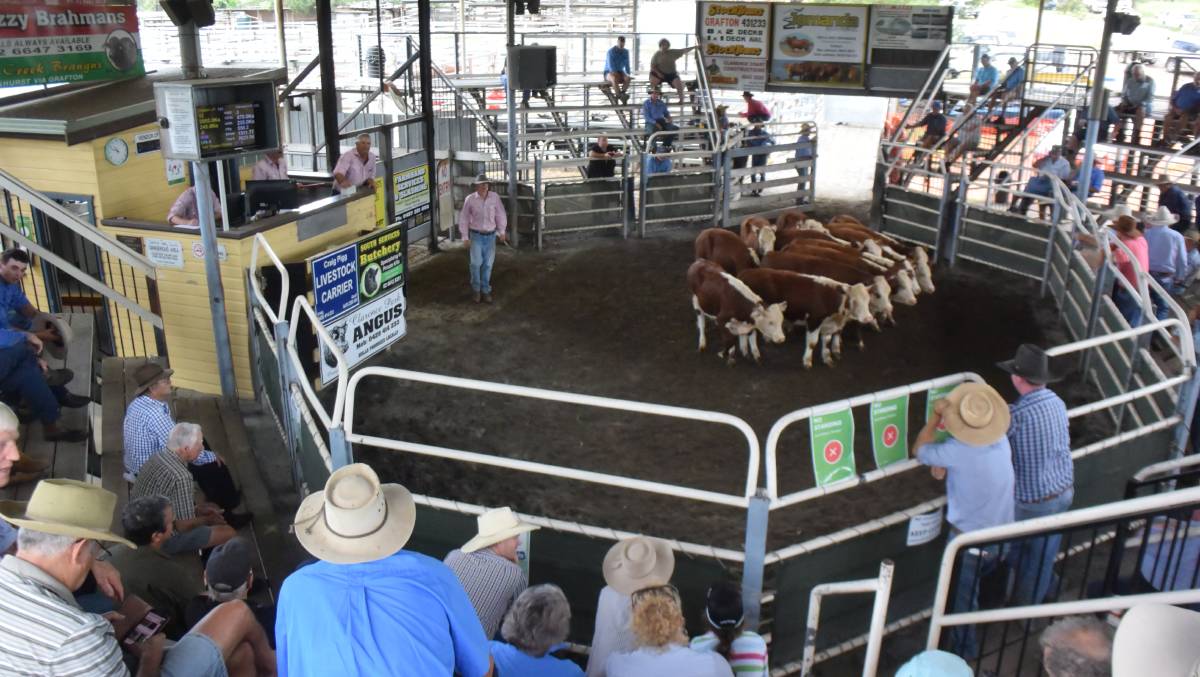 Light steer weaners continued to impress, with a particular punter dominating the buying and paying to a top of 706c/kg for Angus at 157kg which made $1112. Charolais cross went to 704c/kg, Brangus to 654c/kg and Speckle Park cross to 592c/kg.

The Page family from Heifer Station sold Charolais cross steers for their record price of 612c/kg for 238kg.

Peter O'Shaughnesy from grass-rich Clybucca, came away with Angus steers at 200kg paying 656c/kg or $1312 and plans to grow them out to 500kg.

Other buyers sent them to Toowoomba and Moree, Tamworth and Scone.

Bruce Drury, Dungowan via Tamworth, paid 560c/kg or $1086 for Santa cross heifer calves, 194kg, and plans to grow them out to 350kg on a crop of irrigated Lucern - not that the legume needed much moisture until lately.

"We can't sell the hay at the moment with the good season so we might as well put cattle on it," he said.

Cows and calves, 129 units sold open auction, averaged 2636 and reached a top of $3020 and they were snapped up for splitting, growing out and eventual processing at EC Throsby, Singleton with a pen of Angus, the mums tested in calf, making $2800 while Charolais offered as a three-way made $2880.

Angus cows with calves going to Dorrigo sold to $2975.