They varied from modern superfine types aiming at the Italian market through the finewool types to medium wool types.

At the end of the two days, eight finalists were shortlisted by Alan McCormack of Walwa Merinos at Gurrundah and James Barron of Adina Merino and Poll Merino stud at Peak View - four in the long wool section and four from the spring shorn section.

Classed by Nutrien stud stock specialist Rick Power, the Anderson's September 2019-drop entry was awarded the prize for champion maiden ewes during the dinner held on Thursday night due to the cancellation of the Crookwell Show.

Mr Anderson noted his flock had been Hazeldean-based for the past four decades, purchasing rams from the Litchfield family stud at Cooma.

He continues to strive for improvements in flock productivity, including fleece weight and fertility.

"I don't want to sit back and think I have the best I can do," he said.

"Every year throws up new challenges and we have to be prepared."

Mr Anderson said values for sheep were extraordinary and they were certainly helping him and other Merino breeders stay ahead.

"I am happy with these ewes," he said as he introduced the flock to more than 60 spectators.

"They have been well grown with a heavy fleece."

Each judge agreed with Mr Anderson's self-assessment and pointed out the top five ewes (penned separately) were a very clear indication of where he wants his flock to be.

"They are a very even flock, and the top five ewes show where Brian is aiming," Alan McCormack said.

"The ewes have good great barrels, stand well and are carrying a very well-nourished fleece.

"You can always pick out little things in a flock which can be improved but overall I think Brian has done a great job."

James Barron admired the stretch and depth of body and clean heads on the young ewes.

"I think they will be very fertile breeders," he said.

"They are very good structurally and I think they will be a very productive mob of ewes."

Mr Anderson presented 562 maiden ewes after they had been classed to 30 per cent seconds by Mr Power.

The Lower Sylvia Vale maiden ewes will now go on to represent Crookwell in the Southern Tablelands Flock Ewe Competition on March 19. 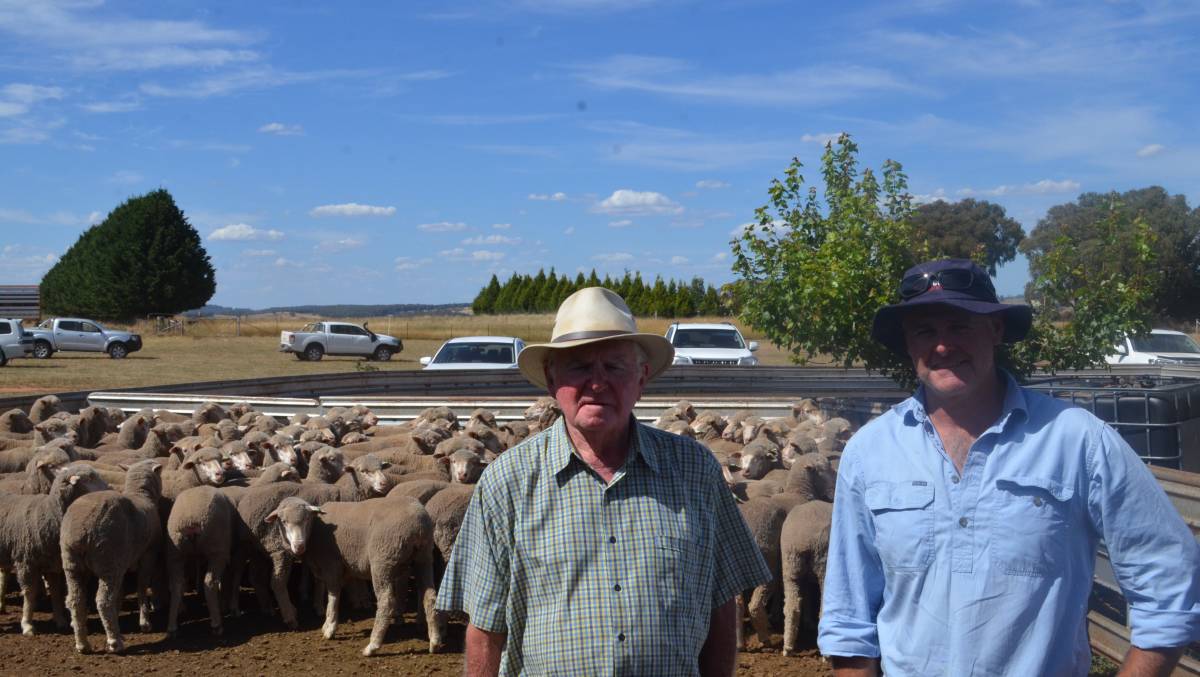 The Innisvale flock was classed by Rick Power at 34 per cent seconds and the fleece measurements for the 2020 fleece line was 18.6 microns, while the hogget line was 17.2 microns.

When speaking to the crowd, Mr Lowe admitted his focus used to be 'wool, wool, wool!'

"But since getting Rick here for the second year I have been discussing with him more focus on fertility trying to get more lambs up and running," he said.

Judge James Barron was impressed with his first vision of the Innisvale ewes and saw no reason to change his view on closer inspection.

"They are good long-bodied ewes, with big heads and good leg under them," he said.

"I think they are a very good mob of commercial ewes, they are good money-making ewes and if you are sticking with the fertility job you are doing I think it will turn around pretty quickly."

Alan McCormack further noted that throughout the competition, no one was getting enough lambs to survive through to weaning and even beyond.

"You are getting them but not keeping them," he said.

"Basically as an industry, we have things down pat, we are getting the ewes in lamb but they are not turning up at lamb marking!"

That is a big concern and Mr McCormack said the weather is a problem but it is not an excuse.

"So congratulations to Michael, he is addressing that issue," he said.

Sponsored by
Junior champion Summit Charisma Q1 too out the Simmental breed's supreme exhibit at 2021 Canberra Royal Show.
Test
It may have been the only entry but Nicolstoke Quinta at 14 months impressed at Canberra Royal Show.
Test
Long-term research has shown a single intensive strategic tillage after 20 years of no-till has relatively minor and short-lived impacts on soil physical properties.
Test
Junior champion female at 16 months, Whitby Farm Elleroo, took out the grand and supreme championships at 2021 Canberra Royal Show for Ken and Gil Lorains, Zeerust, Victoria.
Test
Drought forced many farmers to think outside the square. One family has done just that by transferring farm skills into an innovative idea.
Test
A lone entry in the Ausline breed section at Canberra Royal Show took out junior bull, grand championships and supreme breed honours.
Test
A rich chunk of NSW pastoral history has hit the market in the shape of an Upper Hunter landmark homestead property, to wind up five generations of extended family ownership.
Test
An Angus bull and Limousin cow went head to head in the Canberra interbreed.
Test