The findings from the Australian Farm Institute report, "Managing Farm-Related Land Use Conflict", were central to the webinar discussion, which included the next steps in managing the right to farm issue. The NSW government needs a better way to identify agricultural land if it wants to protect it.

The findings from the AFI's report, "Managing Farm-Related Land Use Conflict", were central to the discussion, which included the next steps in managing the right to farm issue.

It comes after Mr Quinlivan's appointment to the commissioner role last August when he said the first job on his agenda was to deal with land use conflicts in hot spots across the state, including Coffs Harbour's growing horticulture sector. 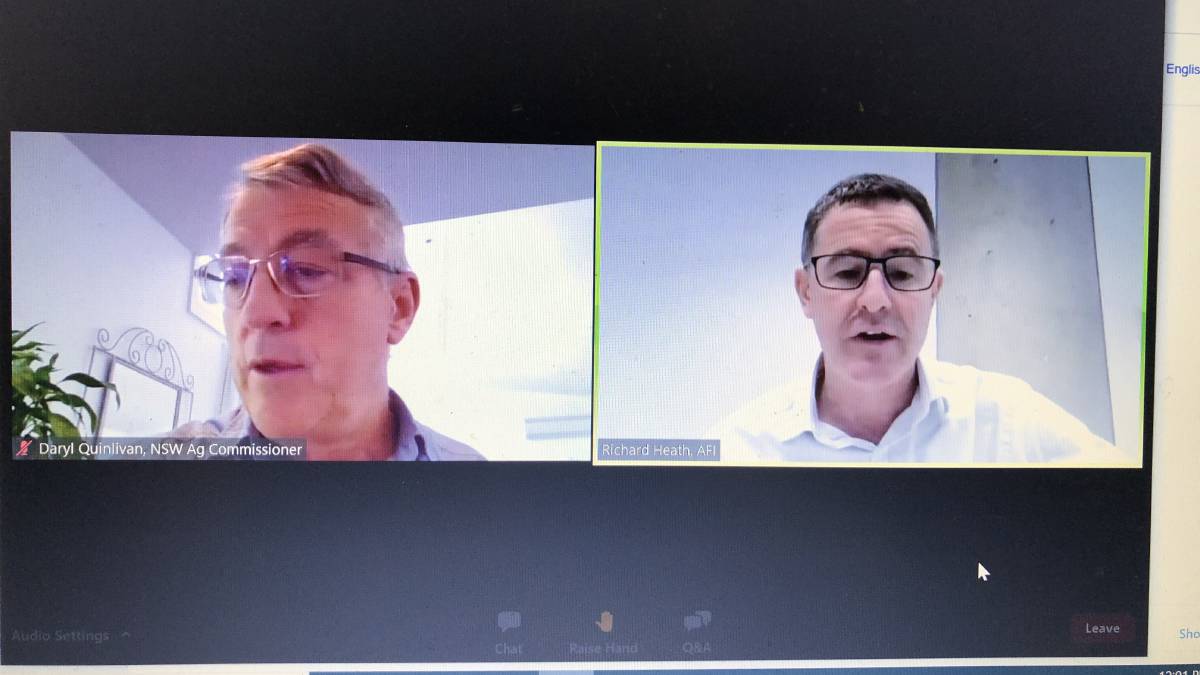 During the webinar Mr Quinlivan said he would be recommending to the NSW Government that there be a more comprehensive method of identifying agricultural land and classifying it to apply appropriate regulatory regimes.

"We need to do a better job ... we need to start with a more affective means of identifying ag land if we are going to regulate it more effectively," Mr Quinlivan said.

He said there was a universal agreement on this issue, but there was no consensus beyond that.

"The detail is complicated. I doubt we will get it right, but it's important to start in a more effective way than we are currently doing," he said.

Mr Quinlivan said he was hearing a number of stories about "good" agricultural projects that were going elsewhere or had not been able to proceed due to delays in the planning system, often leading to increased costs.

"There are quite number of stories where people had good projects that appeared to meet all the requirements for new investment in rural NSW, but had not been able to navigate the planning system to completion and had gone elsewhere," he said.

"We need to test whether that's because of the characteristics in the NSW systems, if investment climates are different in other states, or the approach of local governments in other states is more sympathetic to these kind of projects."

He said there needed to be a more consistent approach across the state on how local councils approach agricultural projects.

"Local councils vary a lot in their capacity, they vary in their focus and interest in agriculture against other land use," he said.

"But they are all trying to grow, grow their population and economic base and prove the resilience of their local economies and communities.

"We think they need more help from the State Government to provide more in the way of tools and decision making instruments to help local governments manage these things.

"There is scope for the State Government to provide local governments with greater capacity and get more consistent high quality decisions across the state."

As part of its study, the AFI reviewed the global and domestic perspective, focusing on regional cases studies in the North West, Greater Sydney, North Coast and Greater Hume.

In the North West

In the Greater Hume

In the North Coast

The AFI's Richard Heath said there were a number of contributing factors in land use complaints, including a lack of communication, education, planning (lack of guidelines in the DA process) and a lack of compliance resources.

Mr Heath said there were implications beyond costs, including significant impact on mental health and an imbalance of power in legal disputes.

"There is no silver bullet in terms of regulatory process or planning outcomes or change in planning procedures that will fix this ... it requires a combination of broader strategies," Mr Heath said.

"There needs to be a willingness of government to think differently in the way they defend agriculture and in some ways understand farming practices and defend that."

He highlighted that in Canada they had used multiple tools including encouraging communication between the parties to minimise or resolve conflict including the Normal Farm Practices Protection Board, which had resolved 97 per cent of complaints in 2016/17.

Meanwhile, the commissioner recommended the development of an Agricultural Land Use Planning (ALUP) Strategy to address three key issues: long-term availability of productive land, reducing land use conflict and supporting dispute resolution and support the growth of agriculture and regional economies.

Options for the ALUP Strategy have been drafted, which can be reviewed on the Department of Primary Industries website.