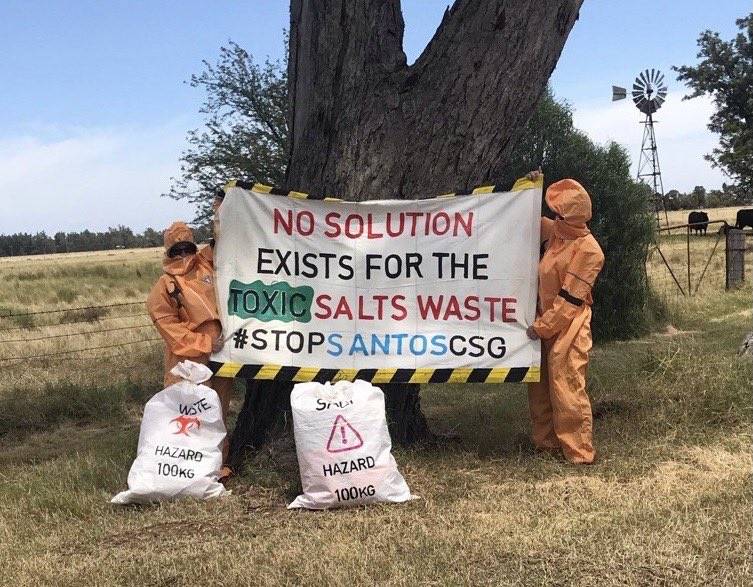 CAUSE: Environmental protesters state their case outside Narrabri Airport on Friday: Photo: Twitter

The threat of environmental protests forced the Reds and the Waratahs to hold training sessions behind closed doors on day one of the Festival of Rugby at Narrabri on Thursday.

Mining company Santos - which sponsors both the Waratahs and the Reds and is the inaugural festival's sponsor - has a big footprint in Narrabri, where its exploration of coal seam gas leases has sparked outrage among environmentalists.

In an Instagram post on Thursday, the Waratahs said that "due to threats of vandalism" from protesters, their captain's run at 6pm and the Reds' captain's run at 9.30am - both held at Dangar Park - were closed to the public.

"We share your disappointment and frustration but reassure you that all other ticketed events will remain unchanged at this time," the Waratahs said.

"There's been no protesters at the moment, but they had threatened to come along, at which point they just thought it would be safer to close training," a Waratahs spokesperson later told ESPN.

"At the moment it all seems to be okay. It could have ended up being nothing, but they didn't want to run the risk."

A junior coaching clinic at 4.30pm on Thursday was moved from Dangar Park to Collins Park.

In a Twitter post on Thursday, North West Protection Advocacy said it was "more concerned about toxic pollution from Santos' coal seam gas activities in Narrabri than #Waratahs football".

The post included a picture of protesters that the group said was a "welcome party" at Narrabri Airport on Thursday.