The $45,000 ram was the second-most expensive Dorper ram to sell in Australia. 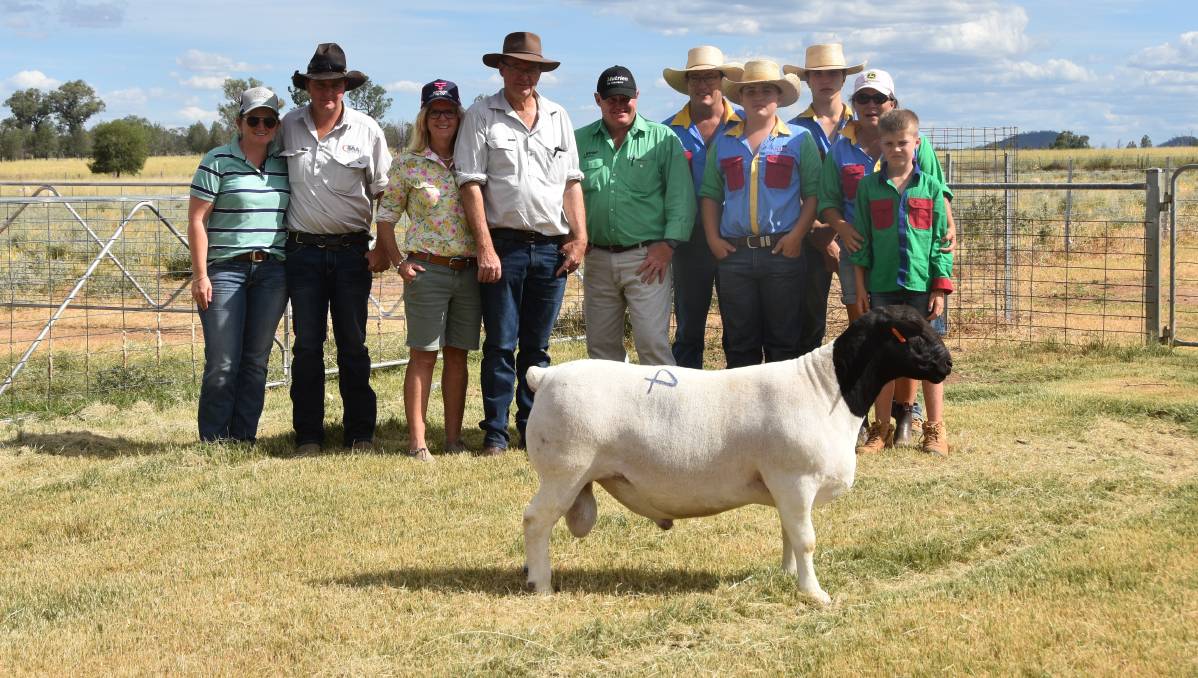 AMARULA Dorper's set a new stud record and a new global benchmark at its annual production sale on Friday.

Conducted by Nutrien, the on-property sale attracted 51 registered bidders and a big crowd of spectators from across the state and beyond, which saw the Gravesend operation claim a slice of history.

The sale achieved a 100 per cent clearance rate as the 148 head up for sale were snapped up.

The top-selling ram (tag 187663) attracted a winning bid of $45,000 from the Palmer family of Semi-Arid Ag, Overnewton Station, Ivanhoe.

The three-year-old ram sat in the top 10 per cent of the breed for post-weaning eye muscle depth with a 2.4mm ASBV, a dressing percentage of 67pc, a shear force at 1.2kg and at $45,000 became the second-most expensive Dorper ram to sell in Australia and fell just $5000 of the world-record price held by Dell Dorpers.

When asked what his immediate plans for the ram were Semi-Arid Ag's Jack Palmer said "get him insured".

"I actually hadn't had a look at him before today," Mr Palmer said.

"The old man had a look at him before we got here and Justin [Kirkby] has had a fair bit on Facebook about him as well, but he had all the attributes we're after and the same bloodlines we've bought previously.

"We might send him away and get some straws taken out of him and then send him home.

"We only breed rams to use ourselves, we don't sell any on and the way the lamb market is looking at the moment, it gives you the confidence to go out and spend that kind of money on a ram like that."

However, the busiest buyers were not even present at the sale, instead buying 51 rams and ewes at an average of $3955 via Auctions Plus.

"Basically, this result is just mind boggling because our focus the entire time we've had this stud has been on clearance," Mr Kirkby said.

"Clearance tells you whether or not people want your product and to get a full clearance here today [Friday] was really pleasing and goes to show people want our product.

"I always thought the online bids would play a big part in this sale because so many people, who were regular buyers, told me they wouldn't be able to come along but would be going through Auctions Plus."

Such was the excitement of the bidding on the day's top-selling ram, fellow Amarula principal Lorroi Kirkby nearly fell over backwards as the bids continued to fly.

"As I said, clearance is normally our top priority and I think today a lot of our more regular buyers might not have walked away with too many rams, such was the competition," Mr Kirkby said.

"There was two or three people here live bidding and a few on Auctions Plus that saw it get to $45,000 and honestly we couldn't be happier or more pleasantly surprised."

The annual event also had a charitable feel as the proceeds from the sixth ram sold, which was purchased by Semi-Arid Ag for $4500, went to a cause close to the Kirkby family's heart.

"The Fowler family launched the charity after they had a child die as an infant from an incurable disease and their goal is to set up a hospice in every major city in Australia.

"Their objective is to raise $4 million to help make that happen and for us to be able to contribute to that is really special.

"I think having Flynn auction off the ram was also really special and we were so pleased the Fowler family could come along and join us as well."