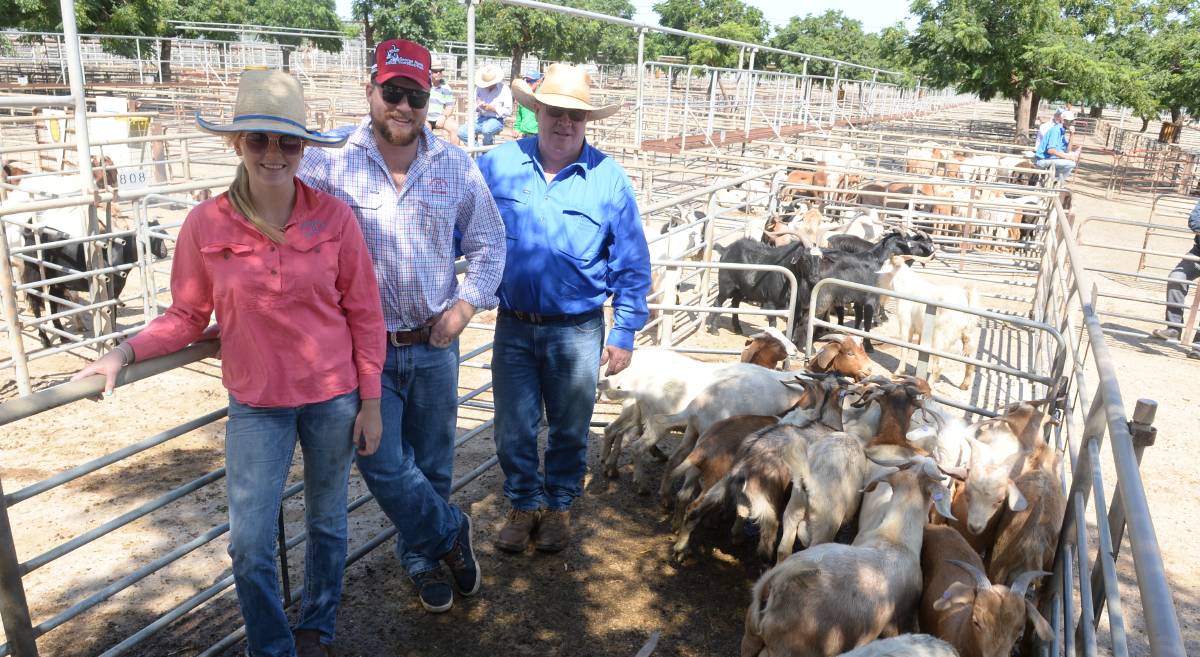 Jas Newton with George and Rob Harris, Bangalay North, Coonabarabran, with first-cross billies that sold for $116.

The flush season continues resulting in goat availability not as easy to harvest which is pushing restockers to bid big for the younger types that are available, and that was reflected at Tuesday's Dubbo goat sale.

RESTOCKERS were the winners at Tuesdays Dubbo goat sale but they had to pay higher prices to secure what they could buy in the smaller yarding on some 900 head.

Overall values jumped from $10 to $15 a head on average above the previous sale last November, which was also a dearer sale than the August prior.

PT Lord, Dakin and Associates' Joe Portelli, said the demand for younger restocker-type goats was very strong making up to $120 a head.

"Meat goats were at least $5 to $10 dearer and received strong restocker activity among feedlotters and particularly graziers who were vying for nannies, which helped push butchers along too," Mr Portelli said.

"There were blokes chasing lighter-weight goats as an alternative grazing and fattening course as they were finding it hard to buy store lambs or sheep."

"Bush billies made from $100 with a special rare offering of several larger, older billies fetching $295.

And while prices have stayed strong - over-the-hooks price last Friday was quoted at 813 cents a kilogram (carcase weight) average, according to Mr Portelli, there were graziers in the far west concentrating on bush goats which, he said were easier to manage than sheep if properties were set up for goats.

"Goat values are holding as there are fewer about due to harvesting in the drought, and now with more pasture availability, herds are not concentrating around waterholes making it harder for people to harvest," he said.

"The money is there and goat meat is the most eaten meat in the world, and Australia is a big exporter, so I think that will stay strong."