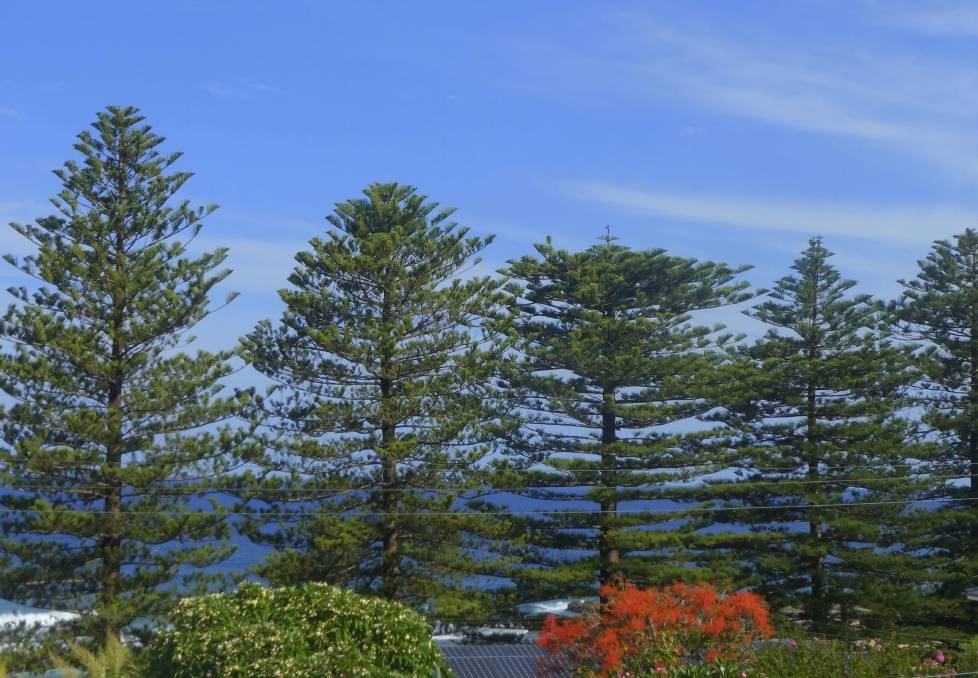 Norfolk Island pines growing near Wollongong. Similar stands are a familiar sight on the Australian coast.

Swedish botanist Linnaeus, the father of botanical naming, grouped most cone-bearing trees as Pinus and it remains the largest family of conifers.

THE distinctive sight of a group of lofty Norfolk Island pines (Araucaria heterophylla) is familiar to many of us from holidays at the beach.

Mature trees are huge, up to 60 metres tall, and as they grow well in deep sand and stay upright in the teeth of brutal salt-laden gales, once planted they tend to hang around (as would-be property developers discover from time to time, when faced with a large stand of majestic trees and a correspondingly strict council preservation order).

Although Norfolk Island pines are endemic to Norfolk Island they are not true pines but members of the Araucaria or Chile Pine (another misnomer) family, an ancient plant family of "living fossils" dating back 200 million years.

It's possible that conifers are often referred to as pines because early botanists, having fewer species to name, put them into a limited number of genera.

Swedish botanist Linnaeus, the father of botanical naming, grouped most cone-bearing trees as Pinus and it remains the largest family of conifers. Norfolk Island pines were the first trees in the Chile Pine family known to the west.

Captain James Cook, when he discovered Norfolk Island on his second South Pacific voyage in 1774, was impressed by its large forests of tall trees with incredibly straight trunks.

The British were ever on the lookout for trees for sailing ships for use as masts and yards (spars on masts from which sails are set) and Cook thought they would be ideal.

Alas, the timber turned out to be insufficiently resilient and the industry founded within a few weeks of the First Fleet's arrival in Sydney was abandoned.

The common name Chile Pine family came not long afterwards, from the discovery of the Monkey Puzzle tree (Araucaria araucana) by Archibald Menzies, a Scottish surgeon and amateur botanist who accompanied Captain George Vancouver as naturalist on his voyage round the world in 1790.

When dining with the Viceroy of Chile, he pocketed a few seeds that he had been served as dessert, to grow on board ship on his way home.

Menzies named his saplings Chile Pines, but although hardy, they were regarded as scientific curiosities until forty years later, when gardener William Lobb recognised them when plant hunting in Chile.

Thinking they could be good garden trees, he sent kernels to his employer, nurseryman John Veitch.

He was correct: the Monkey Puzzle become hugely popular with gardeners and in 1980 earned the Royal Horticultural Society's Award of Garden Merit.

Lobb was also responsible for naming the genus Araucaria, to honour Chilean Araucanian people who had treated him so hospitably.

Unlike Monkey Puzzles, Norfolk Island pines are subtropical, but tolerate temperatures down to -10 degrees Celsius if protected from frost when young.

I have seen them growing in cold inland areas with high rainfall in New Zealand.

They are dioecious, meaning you need both male and female trees to produce fertile cones.

Their horizontal branches spread widely with age, so don't plant one anywhere near a building.