Darling River Action Group president Ross Leddra stands in the dry Lake Menindee. The NSW government's water savings project could be the nail in the coffin for the lake, which has not filled since 2017.

Darling River Action Group chairman Ross Leddra used to have one of the best waterfront views in the country - his property among a row of houses on Lake Menindee's Sunset Strip.

But it has been more than three years since Lake Menindee filled, which has seen Sunset Strip slowly sink into disrepair.

The fading 'Welcome' billboard is one of the last signs of the Strip's heyday that its residents once enjoyed.

For years Mr Leddra has been fighting to return Lake Menindee to the "oasis in the outback", but the NSW government's proposed water savings project could be the nail in the coffin for that dream. 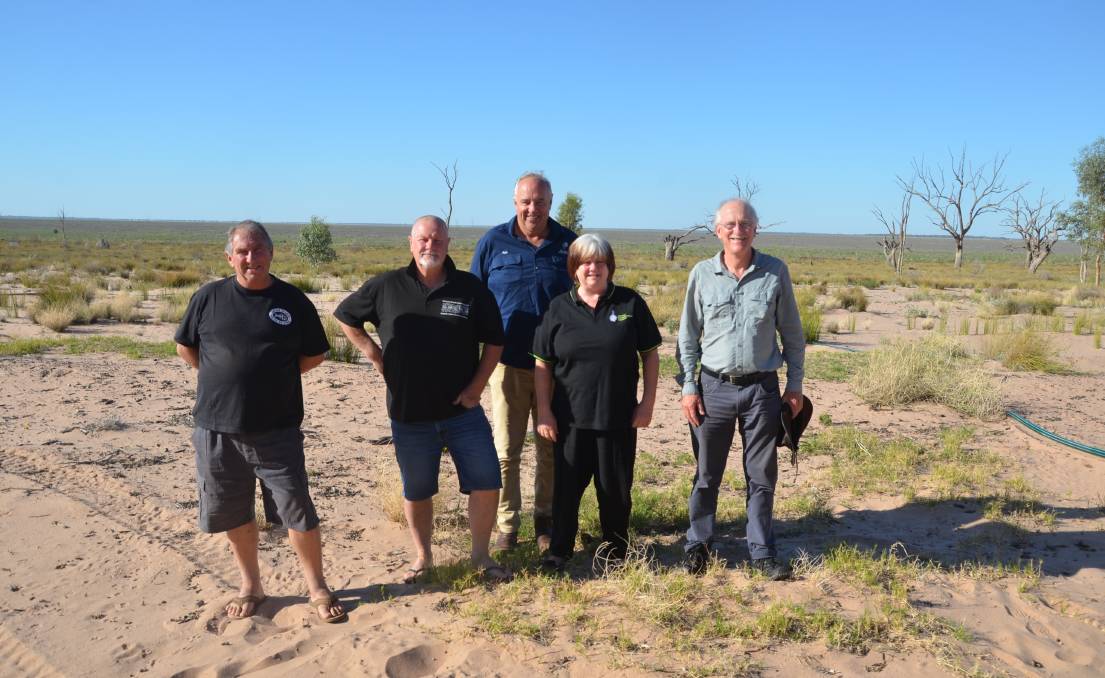 "The damage they're doing to Menindee is huge, they'll never get the agricultural industry back and the environmental and indigenous cultural impacts will be devastating, not to mention the impact it will have on mental health," he said.

Estimated 106GL to be saved by the project

Modelling has indicated that SDLAM projects across the Basin will save 605 gigalitres of water, allowing for a reduction in the overall amount of water returned to the environment, eliminating the need for further buybacks.

It has been estimated the Menindee Lakes project will contribute 106GL of those savings.

The package of works that make up the project, which is yet to be costed, would preferentially retain water in the smaller Lake Wetherell and Lake Pamamaroo, as opposed to Lake Menindee. The proposed works would also permit faster draw-down of water from the Menindee Lakes.

A spokesperson from the Department of Planning, industry and Environment (DPIE) said the project's aim was to generate water savings by reducing the surface area of the lakes, increasing their depth and using stored water more quickly to improve environmental and downstream outcomes.

"Currently, up to 400GL a year is lost to evaporation when the Lakes are operated at full supply," the spokesperson said.

"When they are operated at surcharge volume, the loss is up to 700GL."

The DPIE spokesperson emphasised that the project was essential if NSW was to meet its obligations under the Murray Darling Basin Plan without further buybacks.

But what is the social and environmental cost for Menindee?

It is a question being considered by committee members of the NSW Legislative Council inquiry into new dams and water infrastructure, who travelled to Menindee on Wednesday last week to hear from locals and see what impact the proposed project would have.

The politicians were greeted by a 'who's who' in water from the Menindee region and Lower Darling, as well as the Murray, with around a dozen members from the Southern Connected Irrigators and Communities group, which includes the Southern Riverina Irrigators, travelling to Menindee.

Mr Hardman told the committee that Barkindji people didn't assess water security by megalitres and gigalitres, but by whether they could go fishing and teach their children their culture.

"It's frustrating because we don't want to own water, it's a natural thing that occurs," Mr Hardman said.

Ms Faehrmann said it was incredibly valuable for committee members to visit the Menindee Lakes and Sunset Strip and to hear from locals directly about the impact that decisions regarding water is having on them.

"I don't think any of us were unmoved by what we heard and we'll certainly be following up on many of the issues raised with the (Water) Minister and her senior bureaucrats at the next hearing," she said.

Discussions with government break down

This local engagement with government on the issue could be the last seen for some time, with the Stakeholder Advisory Group (SAG) discussions with the DPIE breaking down.

The Menindee Lakes SAG chairman and grazier Terry Smith wrote a letter earlier this month advising the government that they will not engage until the health of the river and its communities downstream were placed ahead of upstream commercial interests.

"Until the issue of equitable water sharing for the entire Darling/Baarka is addressed, the proposed changes at Menindee will have no support from the Lower Darling community," the letter read.

"Without water there is no project."

Meanwhile, compensation for Sunset Strip residents is being considered as part of the project, but the Sunset Strip Progress Association's Bill Fraser and Peter Cox doubt it would cover their losses, with property values shrinking to almost half of what they once were.

"We want the water back not money," Mr Fraser said.

Sunset Strip residents were mostly made up of retirees and Mr Fraser said some of them now needed to move to a larger town like Broken Hill in order to access medical facilities, but as they weren't able to sell their houses, they didn't have enough money to make the move.

"They're trapped here," he said.

Will project increase water security for the Lower Darling?

The government's modelling for the latest proposal for the project, Option M, indicated that water security for Lower Darling water licence holders will improve due to the depth of the Menindee water storages being increased.

However, community organiser (water) for the Nature Conservation Council of NSW and Wentworth Shire Councillor Jane MacAllister was skeptical.

"NSW plays a game of keeping the amount of water that arrives at Menindee below 640GL (the trigger point for the MDBA taking control of the water) because they don't want the MDBA to operate it," Ms MacAllister said.

"Once the lakes reach 640GL the MDBA run it like a formula one race car.

"All of a sudden there's a massive rush of water which erodes banks which haven't been wet for a long time, stirs up the soil and creates turbidity.

"The project is not going to create the drought storage that we used to rely on, when there had to be 18-months of water in the lakes for Broken Hill's town water security, now that's decoupled from the lakes there's no compulsion to keep any water in there."