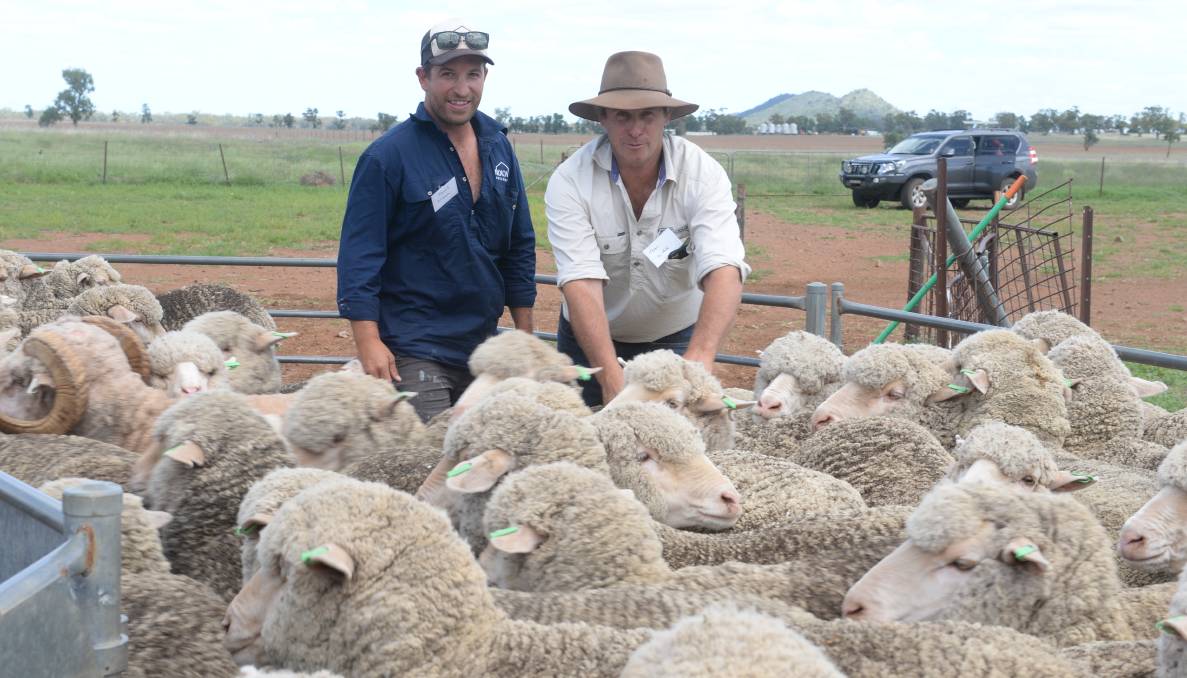 James Nixon and his classer Tom Kirk with the Nixon family's winning maiden ewes at Leewang, Yarrabandai, which gained a hat-trick of three wins in three years.

JAMES Nixon is continuing the tradition of the breeding of excellent quality Merino sheep and success with the Leewang flock at Yarrabandai that his late father, Grant, began in the late 1990s.

James' parents, Grant and Dominique, first won the competition's hat-trick in 2000,01,02 and also gained three second placings and another win in 2005 before Grant's untimely death in 2006. He started with 200 ewes when Dominique leased the farm and has built the flock up from then.

"This year we'll join 1000 ewes," he told the visiting crowd of some 40 Merino enthusiasts at Leewang.

"We had an unreal lambing in 2019 as we lambed onto failed crops and marked 115 per cent lambs and these are them," he said.

"They were shorn as lambs in February 2020 and cut 2.6 kilograms of AAAM wool then shorn again in September to cut a bit over 6kg.

"The flock ewes were also shorn in September and cut 6.2kg average as well."

Mr Nixon said he loved the black tips in the ewes' wool.

"I like heavy sheep and I'd love to get to 3000 ewes eventually and more country.," he said.

"The sheep have to fit in with our busy lifestyle, James also runs a building company, so they don't get pampered."

After birth the lambs are weaned early and put on lick feeders in paddocks.

Ewes get a multi-min injection before lambing and a vaccination every shearing.

"These were dipped in December because we had a lot of flies, in the lambs and particularly the shoulders," he said. "Also, we had bought a lot of crossbred lambs from Western Australia, so we thought we'd dip the lot."

The Leewang flock was on six-month shearing but couldn't get the wool length, so James moved to eight-months, however due to management juggling, he said he'd most probably move back to six-months shearing and crutch the sheep himself as he was finding it hard to get shearers.

Mr Bell said the display was a good even line of ewes.

"They have soft, well-nourished nice and bright wool and look very productive and in good condition for joining."

Mr Coddington said from his explanation of his management regime Mr Nixon has done all those one percenters like vaccinations, mineral, lick feeding and condition score that would improve profitability.

"You get out from what you put in and that's evident in the sheep here," he said.

Second prize went to Mat and Korina Aveyard's Plevna West flock, Trundle, which had won the competition in 20014 and 2016.

The Burke brothers, Chris and Greg, The Kars, Trundle were placed third. They won the top award in 2018.

Competition stalwarts, Anthony and Margaret Simmons and son, John, West Curyo, Trundle, who have exhibited every year of the competition were presented the Grant Nixon Encouragement Award.