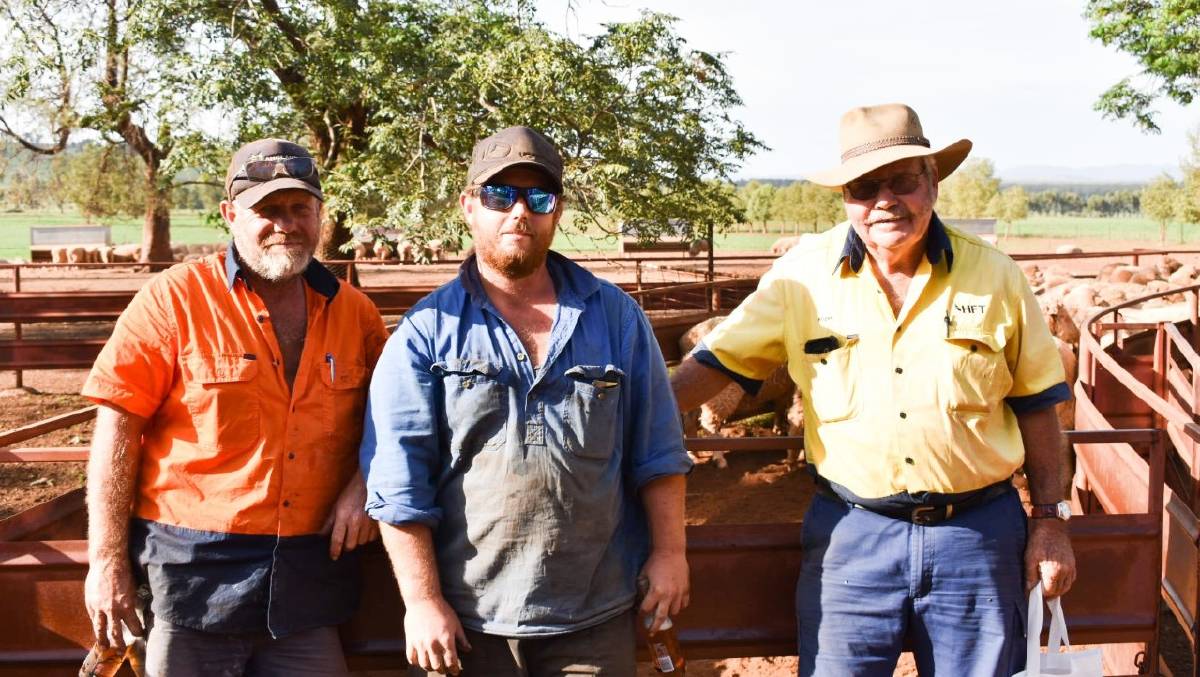 Andrew Hood with his son, Colby and father, Roger, in front of their sheep yards where their maiden ewes won the Parkes competiotion for the second year running.

The Hood family were all smiles after successfully retaining the trophy at this year's Parkes Doug Bicket Memorial Maiden Ewe Competition.

Three generations of the family work alongside each other in their farming enterprise at Wendouree, Parkes, and Andrew Hood was thrilled to be able to share the win with his father, Roger and son, Colby

"Dad has always been passionate about his sheep and since Colby joined our operation we have endeavored to really push the livestock side of the business and maximize the returns we can achieve," Andrew Hood said.

Strong markets and an amazing season has the family feeling extremely positive about the future of their flock, an optimism that was plain for all to see as the team of maiden ewes were presented in the shadows of a recently erected, state of the art shearing shed. 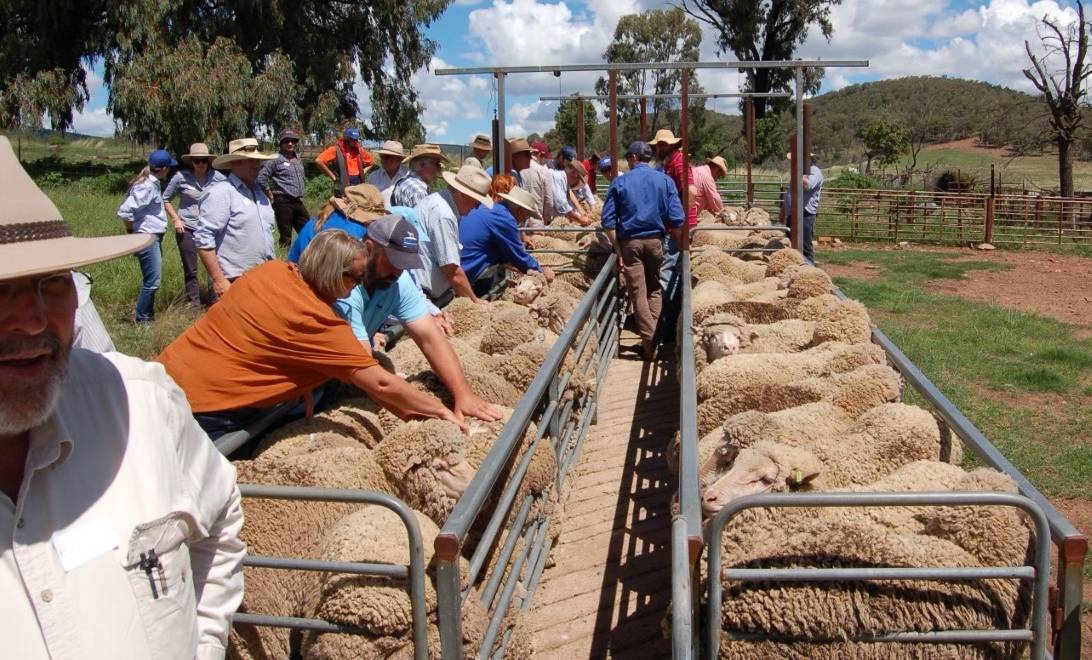 Visitors enjoy the hands-on field day at Parkes Merino Ewe Competition where they can get close to the maiden ewes presented at each property.

"Returns have been good in recent years and we felt it was important to invest in new facilities to make the job easier and safer for both ourselves and the shearing teams that look after us."

The Overland blood ewes carry a 20.5 micron fleece and are classed by Andy McLeod of Dubbo.

The flock presented in top condition, reflected the amazing 12 months of seasonal conditions, in stark contrast to the harsh drought the ewes were born into. Despite well above average rainfall in the past three months and a severe fly wave that has ravaged the district, Andrew said the ewes had not been treated with any chemicals with minimal fly strike, attributing this to the Overland genetics the family has been using for a number of years.

This year's judges, Drew Chapman, Hinesville and West Plains Poll studs, Delegate, and Angus Munro, Stud Breeding Manager for Poll Boonoke and Wanganella studs, Deniliquin, were impressed with the ewes from the moment they set foot in the yards.

Mr Chapman praised them in his assessment. 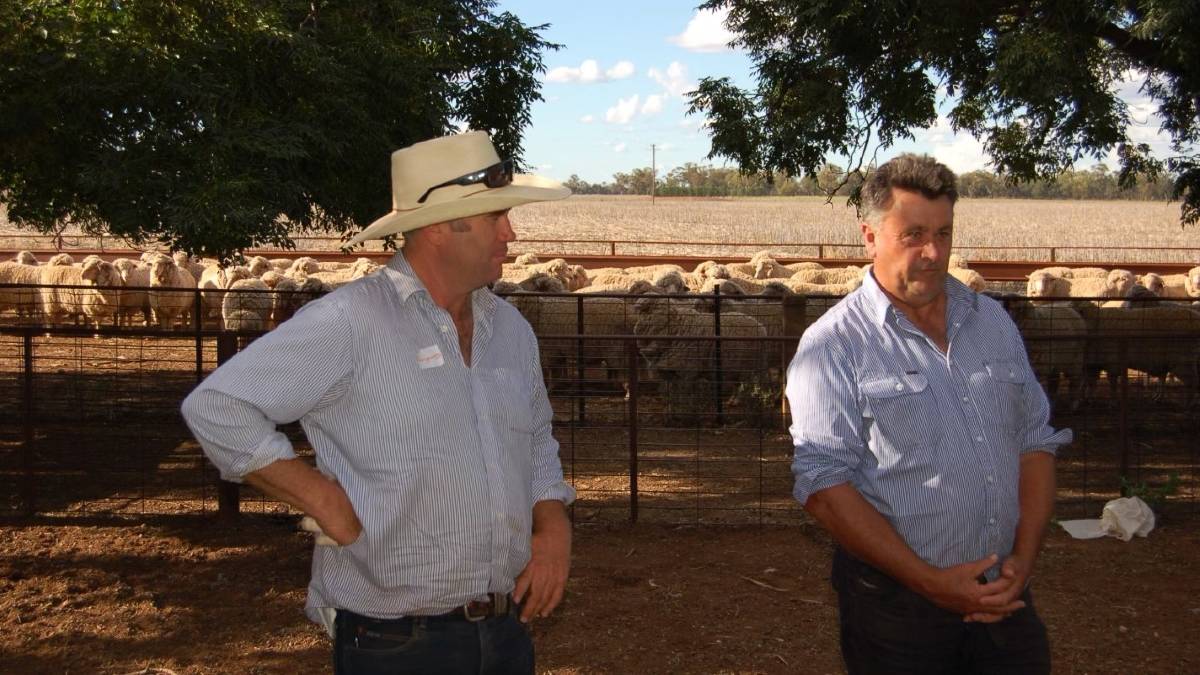 "This is a great commercial mob of ewes that have been well managed and classed with a clear direction," he said. "They are a very uniform mob and are going to cut a lot of white, soft handling wool as well as being large bodied and structurally correct."

Mr Munro picked up on the flock's impressive lambing percentage.

"To achieve a lambing percentage of 130pc in the middle of one of the worst droughts on record is an amazing result and a credit to the management the Hood family is implementing over their animals."

Taking home second place this year was the Allambie flock of the Watt family at Alectown.

The Darriwell blood team is classed by Russell Jones, Trundle, carry a 19.5 micron fleece and achieved a lambing percentage of 112pc.

The team impressed with great nourishment and wool cut ability as well as their confirmation and structures.

Robert Watt stated this was in line with their breeding direction.

"We are trying to breed a well balanced animal that enables us to have a quality product for any of the markets available to us," he said.

This year's encouragement award was taken home by the Witherow family, Ranfurlie, Parkes.

It is the first time the flock has been entered in the competition and the team made quite an impression on those in attendance as they start to build some numbers after the drought.

Steve Witherow said he was thrilled to take home the prize.

"It is great to get some recognition for the work we have done in the past few years to move our sheep in the direction we want to go," he said.

The largest ever crowd of spectators ever seen at the Parkes competition is perhaps a reflection of the optimism around the turnaround in the season and the strong market conditions as the district moves to recover from the drought conditions it had endured up until 12 months prior.

Planning is already underway for next year's event however much of the talk centres around whether the Hood Family can achieve an elusive hat trick of wins in what the judges described this year as an extremely tight competition.