HOMEBRED sires and devotion to their Merinos during the severe drought have led the Crouch family back into the winner's circle of Don Brown ewe competitions.

Harold Crouch with son, Phillip and his daughter, Meg, bred the 2019 drop maiden ewes from just a 71 per cent containment lambing at Karu and Big Weebah, south of Condobolin.

Harold Crouch said they only lambed 403 ewes of which only 23pc (80 head) were classed out so the family could retain as many ewes as possible.

Lambing percentages had got better with 90pc in the 2020 drop of April/May.

The Crouchs breed their own rams from an elite group of ewes joined to a Towalba sire purchased five years ago, and according to flock classer, Chris Bowman, Hay, will be on the lookout for another probably this year.

The flock was runner-up last year and a winner in 2019.

"They are well constructed with beautiful heads, are very well covered and have food structure," Mr Picker said.

Queensland breeder and World Federation of Merino Breeders president, Will Roberts, Victoria Downs stud, Morven, Queensland, said the ewes were extremely well grown with big, strong heads, beautiful big muzzles and he liked the fill-in behind the back of the head.

"I'd really like big strong sheep like these," she said. "And they are punching out a fair bit of staple for nine months growth of nice, bright lustrous wools." Moonbah's last awards were winning the competition in both 2013 and 2014, but was severely affected by the past drought years and while being a sheep, wheat, oats and cattle enterprise, the cattle had gone by the end of the drought which left some room for the sheep.

Mr Menzies had joined a month earlier this year from January 5 instead of February 5 and would double scan ewes, first after four weeks after rams were pulled out.

"I love the nourishment in the ewes' wools," he said.

"With 32pc of ewes taken out I can see this is a nice, even line of ewes." Peter Stuckey said they were a mixed farming enterprise on 8100 hectares and another 2430ha of lease country at Ungarie, cropping wheat and canola and last year joining 2500 ewes and 300 cows.

The Murtonga flock uses Bundemar blood and is classed by Tom Kirk.

"We run our sheep pretty hard. They have to fit in with what we do," he said.

"We lean more towards cropping so the sheep have to look after themselves, but we try to keep tucker in front of them."

"I like these sheep for their coverage," she said.

Mr Roberts described them as a more moderate framed animal; and he liked the coverage, especially the fill-in behind the heads.

"The wools are as even in type as we have seen today, with great nourishment and very little dust penetration."

The ewes were plenty heavy enough for Mr Picker who labelled them wonderful sheep.

Achievement award went to the Flamingo flock of Mark, Carol and Brad Jones which has been on Lachlan Merino blood for many years and classed by Glen Rubie. Back in the winners circle, Karu Pastoral maiden ewes won the 2021 fixture. Pictured is Harold, Meg and Phillip Crouch with classer Chris Bowman among their homebred sired maidens displayed at Big Weebah, Condobolin. 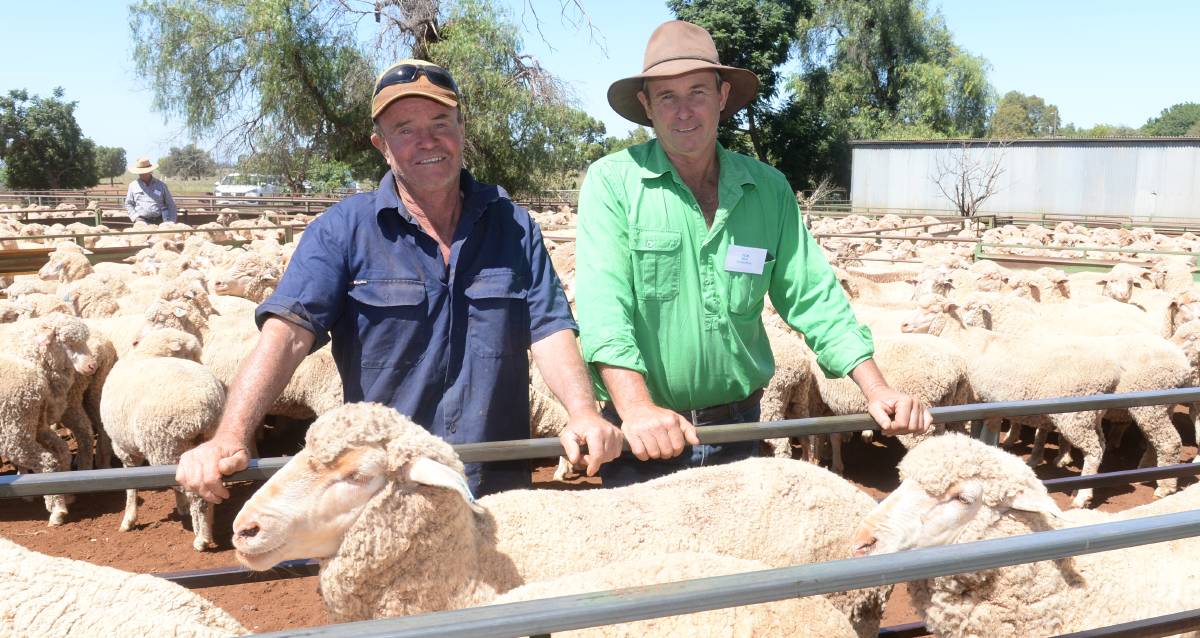