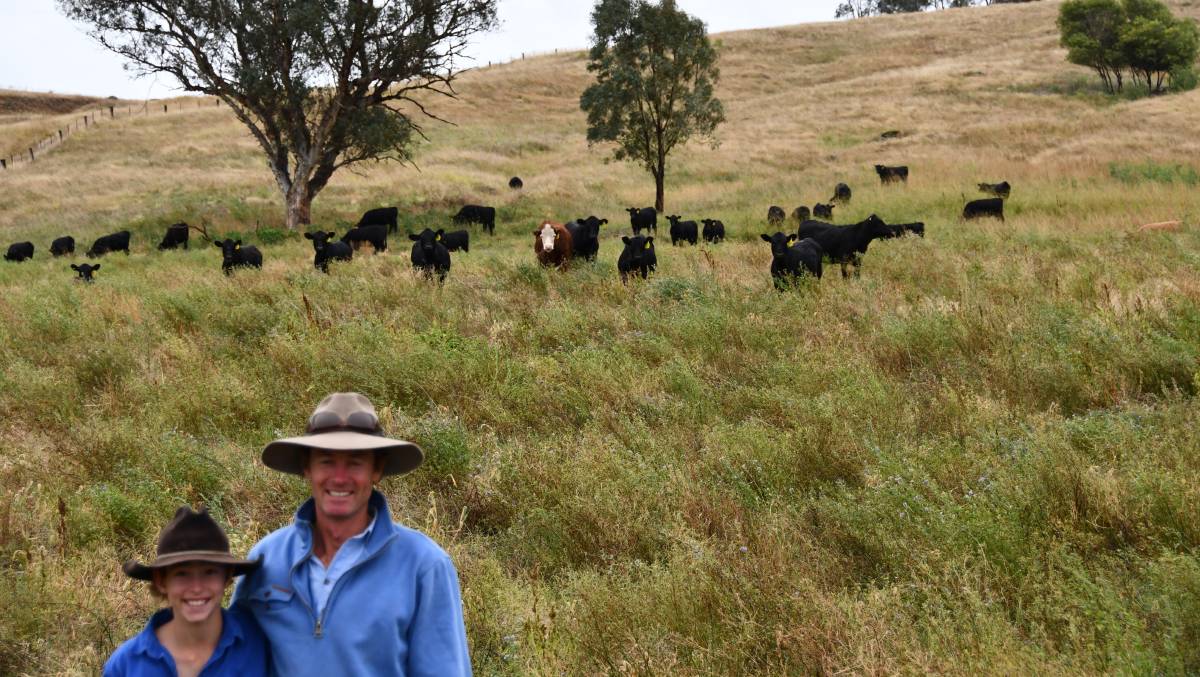 Nick Austin with his son Harry in a paddock where native grass species compliment introduced varieties and increase the biodiversity of his landscape. The growth is a consequence of his planned grazing management.

Taking on the challenge of being the fourth generation of his family to run Mundarlo was daunting to begin with.

Taking on the challenge of being the fourth generation of his family to manage the 1400ha property Mundarlo east of Wagga Wagga was not something Nick Austin had envisaged when he completed a degree in Mechanical Engineering and embarked upon a career in project management.

But time away from the family farm had given Mr Austin a different perspective on his future career prospects and engendered for him a fresh approach to the management of stock and property.

"Project management is very similar to running a business plus having a tertiary education broadens your mind," he said.

"It gives you the ability to research and take on other ideas."

It was a formative stage for Mr Austin as he had not always intended to return to Mundarlo because he didn't think he would enjoy farming.

"I was prepared to come home and tell Mum and Dad I wasn't coming home but when I returned in 2001 I never left," he said.

"I thought it was fair to them to let them know what my plans were."

But daunting as it seemed to him at the time, Mr Austin decided if he was going to make a success of the farm he should do a few courses.

One of those was an Holistic Management Course (HM).

"Brian Marshall was my HM educator and the course resonated with me," he recalled.

"For me it set a few paradigms on their heads - things like the need to have a long recovery period between grazing pastures, putting large mobs together to graze a small area quickly and the impact of animals on landscapes."

They were concepts Mr Austin admits he had never known about or considered but initially he was cautious about making too many changes to the traditional manner in which Mundarlo had been managed by each of the three generations of his family.

"I was a bit scared, there wasn't a lot of support in the community at the time," he said.

"I was new and I didn't know any one who was also moving in that direction."

Enrolling in the HM course was the first catalyst which started him thinking about the challenges of farming and the second was getting married.

"Deanna is not from a farming background and she has a very fresh set of eyes questioning what we do here," Mr Austin said.

"I used to work weekends - because that was what we did on the farm - and one Saturday morning I was heading out to do some fencing and Deanna wanted to know why I was going to work on Saturday morning."

Mrs Austin had spent all week teaching in Junee and she was taken aback her husband would rather work on the weekends than spent family time together.

"Deanna's questions made me think about my work priorities - why was it necessary I work on the weekends?" Mr Austin said.

"I wanted to spend more time with her and our young children so time became a factor in managing the property."

That was the second point which challenged his view that farmers needed to work all the time, and the third was the impact of the Millennial Drought.

"It was probably the most influential factor - it was just relentless," Mr Austin said.

"We had a lot of stored fodder, Dad was very good at being prepared with silage underground and we locked all the stock into sacrifice paddocks and eventually made a feedlot.

"We just fed all the time, taking them through winter into a dry spring and another dry summer and there didn't seem to be any end to it."

It eventually got to the stage where we couldn't cut enough silage in spring to feed out the following year and Mr Austin said they started buying in fodder to keep the cattle in good condition.

"We had been doing some cropping, but all the grain was used to feed the cattle," he said.

"And I started to borrow money to keep the business running."

Mr Austin remembered getting off the feed cart one morning at the end of 2009 and taking stock of the situation.

"We had fed all the weaners for six months and our breeding herd which had been away on agistment came back in worse condition than when they left, the crops had failed and I thought Mundarlo was not giving us what we wanted for our business and our lifestyle," he said.

"Luckily at that time we met a wonderful educator, Bruce Ward who was a consultant and he got us started thinking about the basic principles of grazing management."

Mr Austin admits it was quite daunting at the time but having done the course Mr Ward assisted in setting in motion the concept of planned grazing.

"Through Bruce we formed a support group which initially consisted of eight families," he said.

"They have been wonderful in having a like-minded group to help us work through new ideas and give encouragement when you have doubts."

At that time the main enterprises on Mundarlo were cattle and cropping and Mr Austin said the first change was to box the stock into one of two mobs.

"We adopted the holistic planned grazing which allows for long recovery periods between grazing's," he said.

"Floods in 2010 and 2012 ended our cropping program and we became a cattle breeding enterprise supplemented by cattle trading."

"We also sat down and worked out where we wanted to head with our family and our business and how we saw our future landscape," he said.

Mr Austin monitors the annual changes to his landscape and has noted slow improvement.

"Our ground is covered 100 pc of the time which it wasn't and the distance between perennial plants is decreasing," he said.

"We had been red grass dominant but this year I am seeing other native species coming in and now have four in our pasture mix - red grass, Danthonia, Stipa and Warrego summer grass."

Mr Austin pointed out the planned grazing management has been one of the secrets leading to the profligacy of the native grass species.

"Allowing the plants to fully recover allows their root system to fully develop and combined with the short term animal impact, this is encouraging microbe activity in the soil," he said.

"At this time of the year we have a recovery stage of about 120 days."