While many producers in some parts of the Mid North Coast managed to get their livestock to higher ground, others had no choice as floodwater rapidly rose. 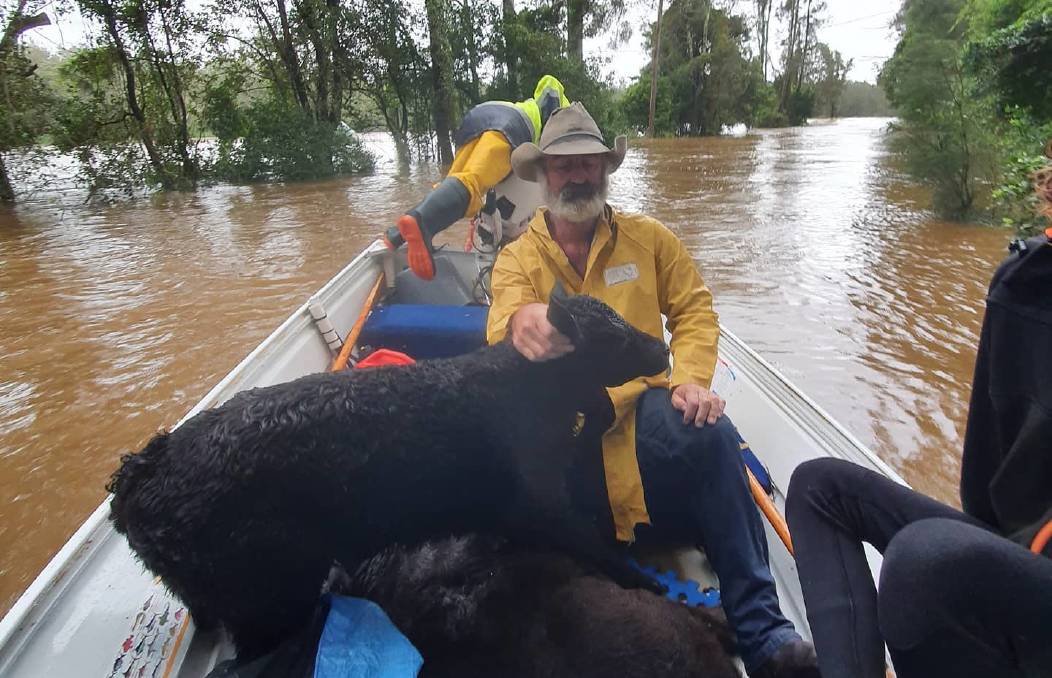 A stockman dives down into floodwater to cut the fence to push stranded cattle through.

He rides an unknown horse in one kilometre of water up to the animal's belly to get it to safety.

He then spends days in a boat plucking calves from the water and shifting cattle to higher ground on the Maria River, south of Kempsey.

Then he drags hay bales to those cattle so they have feed.

And it hasn't stopped yet.

While many producers in some parts of the Mid North Coast managed to get their livestock to higher ground, others had no choice as floodwater rapidly rose surrounding their property with no way out.

But throughout the Macleay Valley stockmen like Leon Gray and Shon Crotty are saving the cattle that could not get out.

"We mustered on horseback in water and have used boats to get to areas you can't access as the water came up so quick,' Mr Gray said.

Further upstream on the Macleay River, sibling Kristy and Phillip Saul from Bellimbopinni are still watching the river closely and hope there won't be a round three of floodwater rising.

"Our country has been owned for a few generations of Sauls so we have knowledge of how it works," Ms Saul said.

"We have been watching closely and talking to be people up river because that's where most of our flooding comes from to get information about the river heights and rainfall."

Having watched the river heights, the Sauls decided to move cattle and lift everything in the sheds and move machinery to mounds.

"By dark the water was coming up from behind us," she said.

"It was quick rising, the flood came up and then it went down.

"Then on Saturday round two came with a bigger flood and more water."

All of their country is now well under water, except for a flood mound, with it over your head in some parts.

She said once they were sorted on their property, they started to help multiple neighbours trucking and and swimming out cattle.

They even helped an elderly couple by moving them by boat so the State Emergency Services could take them out.

"Now we just have to sit back and see what happens and make sure it doesn't go into the house," she said.

"This will affect the country, the water won't get away for a while.

"In the meantime we will just travel by by to check and feed cattle."

There is narrow strip out of the water where they are feeding their herd with round bale silage.

"This is worse than the 2001 flood because the significant unknown is the water that has come from the Hastings River into the back of our property," Mrs McGinn said.

"The reason why it's so bad as it has not abated for four days.

"It looks like that water will still be hanging around for what could be weeks. But the damage to the pastures will be extensive because when the grass is under water for so long it dies and does not recover.

"The big issue we have in front of us is, how are we going to feed stock and we are hoping that the government will respond with an emergency fodder grant for primary producers.

"The scale of this flood is just too big to manage on your own."

Just up the road Bec Sutherland has been stuck at her property with her three girls on Belmore River moving cattle every day to higher ground as floodwater rises inches by inches every hour.

This is while her husband Darren has been on the Kempsey side of the river saving and shifting their own cattle as well as friends.

"Being separated in this situation has been heartbreaking, it's been so hard," Mrs Sutherland said as she wept.

"It's devastating our whole farm is just about under water.

"I'm just emotional now, we have been isolated since Friday and I've had my three girls helping me - and this rain just doesn't seem to let up."

As The Land spoke to Mrs Sutherland, she and her husband were reunited.

They are now loading cattle so they can be trucked to Inverell tomorrow.