As flooding continues along the MacIntyre and Barwon rivers with Mungindi on alert on the Barwon for major flooding (5.25m rising April 3) with a peak expected on April 7, Moree is cleaning up after a major flood in the town and surrounding farmland.

The flood damage in town of Moree is severe with nine houses now declared uninhabitable, and up to 200 houses flooded out or damaged.

Farm infrastructure has also been hit, bit amid the distress of the biggest flood since 2012, there appears to be reduced damage to crops in the ground awaiting harvesting inluding cotton and sorghum.

One of the biggest issues now facing the richest agricultural shire in Australia is now farm labour shortages and access to paddocks considering many are wet and silted over.

Moree airport also faces a shortage of Avgas as numerous helicopters and planes vsiit the area for aerial surveillance and food drops to isolated farms. The Newell Highway has reopened but roads such as out to Collarenebri are still covered by floodwaters.

There is an anxious wait to find out how severe the floods will be next week at Mungindi, a town already struggling after its main supermarket was lost due to a fire.

But although there was a large amount of floodwater through the plains, initial reports are that the damage has been limited in its extent, to such crops as cotton and sorghum.

At Beela, the Estens family were in shock after putting in 30,000 new orange trees only a few weeks ago, to see floodwaters spread over the new plantings.

Dick Estens said the first peak of floodwater was clear, then the second flow was dirty brown - that may actually bring a good silt cover.

The damage to the new trees was very limited (about 50 lost), he said.

Beela saw its heaviest monthly rain in history - about 330mm for March. Many people are still isolated on properties and will not get out for several weeks. Some supplies are being airdropped in.

He said the flood had a lot of intensity to it, lasting up to 40 hours after very heavy rainfall in the foothills east of Moree. Nearly all levee banks were topped. 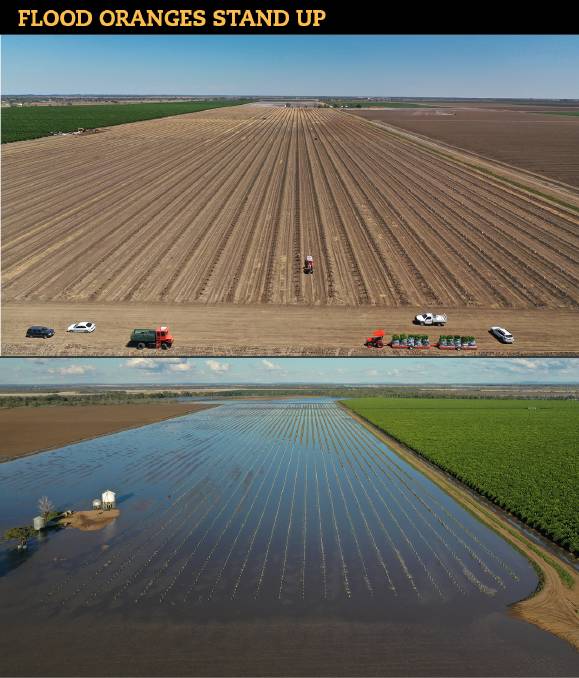 At the Estens property Beela just north of Moree they planted 30,000 oranges just before the big floods hit. But just 25 trees were lost. Photos by Sascha Estens.

The Estens cotton though has fared well despite the floods, with just some cotton on the ground. It may see about a bale a hectare loss.

"We'll probably still hold budget, with the crop coming back from about 14 bales to 13 bales (a hectare). Fortunately a lot of the bolls had not yet opened. So on quality side we are not sure at the moment.

What the rain and floods though had done was set up the district for a great production year.

"We've never seen rain like that before for a calendar month," he said. There'd been a storm dropping about 90mm in ealry March on Beela followed by last Tuesday week's torrential 180mm in most areas around Moree. The flood took many by surprise in town as it had two peaks. It flooded many northern and western parts of the town but did not run into the main business district.

We've never seen rain like that before for a calendar month. - Dick Estens, Moree

AMPS agronomist and farmer Tony Lockrey has surveyed much of the flooded areas from the air and believes while there will be inevitable damage to infrastructure, actual damage to crops such as sorghum and cotton may be limited.

Mr Lockrey expects some boll rot in cotton and estimates this could be anything from one to 10 per cent in crops. The good news was that any cotton washed over would probably stand up again in time for harvest.

Sorghum though will take a quality hit.

He said the main issue brewing in the background was the lack of farm labour and the flood silt and wet black soil making it very difficult to access paddocks.

It was a critical time, with cotton ready to be harvested and the new autumn sown crops not far away from being sown, and there was even less labour around than last year during COVID restrictions.

Mr Lockrey had seen a large part of his property west of Moree flooded that would bring some "Binniguy soil". There woud be the inevitable weed isuues brought by the floodwaters. The silt though would be high quality - normally the best material in the soil - and refresh many paddocks.

He was isolated for five days.

Up to 100 houses were flooded directly in Moree, and another 98 affected, with nine deemed uninhabitable. The clean-up is underway but the local council says it is upset insurance companeis are not moving fast enough to help flood victims with a direction to families not to touch anything until assessors arrive.

Many believe Moree dodged a major bullet with the flood having two peaks instead of one that would of inundated most of the town. 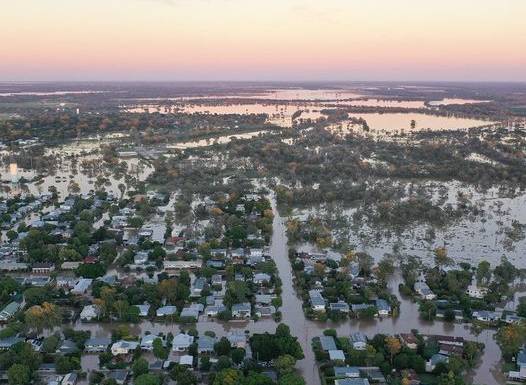 Many people went to bed on Wednesday night thinking the Mehi River was falling, which it was, only to see it rise again overnight, 14 hours after the first peak.

Floodplain harvesting has been hampered by the mice plague which had destabilised a lot of storage banks. "There have been a number of storage issues," Dick Estens said.

Mungindi is on tenterhooks as the floodwaters slowly move down the Barwon with a peak not expected for at least until Wednesday. The Barwon is expected to peak at Mungindi at 7.4m.