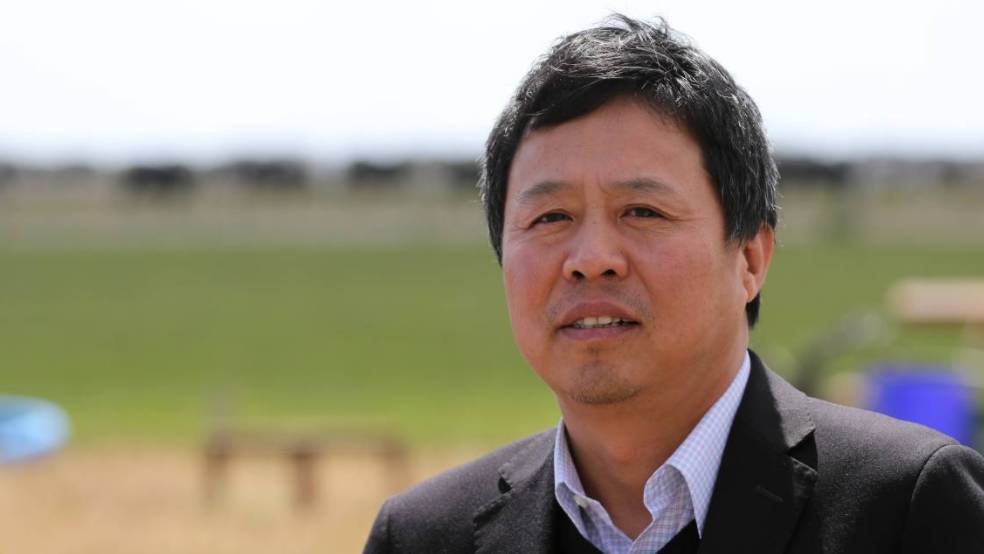 A former chief executive with the forerunner of the troubled Tasmanian Van Dairy Limited says its current problems are a result of "complete regulatory failure".

The country's largest grassfed dairy farming business - formerly known as Van Dieman's Land Dairy Company - has been issued with environment protection notices and had one of its licences suspended over failing to meet effluent standards.

There have also been reports of significant animal welfare issues.

Van Dieman's Land Dairy Company former chief executive Evan Rolley, who finished with the company in June 2018, said the result was a failure of the Foreign Investment Review Board to "properly and transparently audit all the conditions that are attached to the investment".

"It's now reached a point where there are serious breaches of dairying industry regulations, and the state regulatory authorities really have a responsibility to be either closing Van Dairy down or putting in place very stringent requirements that need compliance," Mr Rolley said.

"The FIRB looked for, and were given, a number of undertakings about how the business would be run, in terms of Australian directors on the company board and how funds would be invested to create an additional 90 jobs."

The Van Dieman's Land Company was founded in 1825 and is currently made up of 27 separate farms, running more than 30,000 cows.

That company was created by Chinese businessman Xianfeng Lu specifically to buy the farms.

He promised an additional $100 million investment over five years, intending to increase job numbers from 140 to 235.

The deal was approved by then Treasurer and current Prime Minister Scott Morrison.

In 2018 five independent directors quit, citing a failure by the owner to invest in irrigation systems and maintenance to make the business sustainable.

Former VDL deputy chairman David Crean said the company's central issue appeared to be around board oversight and governance around risk and strategy.

"The board and the then CEO Evan Rolley had a detailed forward program of capital expenditure for irrigation, effluent control, milking machine and laneways maintenance for example, all of which would have been attended to over time depending on prioritisation," Mr Crean said.

"With the proper governance, risk management and independent board oversight, the things that have been reported should not have occurred.

"The lessons around the board resignation several years ago clearly haven't been learnt."

Mr Rolley said the drought-proofing of the farms was an essential part of their broader sustainability.

There were also protocols put in place, before Moon Lake bought the company, around effluent management.

"These are all things Mr Lu gave commitments about," he said.

"The problem we have is the FIRB process and resourcing doesn't provide for annual, independent audits of the commitments being made.

"The only commitment that has been made - that I presume has not been breached - is the taxation commitment.

"And Mr Lu had very little choice over that because it is enforced by the Australian Tax Office."

He said foreign investment was essential to improve productivity in agriculture.

"I'm not particularly against investment from any quarter, but it needs to have reasonable conditions, and they need to be enforced in a way that's transparent," he said.

He said Mr Lu's lawyers had been writing to FIRB, making claims about what he had been doing.

"That's not regulatory enforcement of foreign enforcement conditions; there's no transparency, there's no independent audit and there are no consequences for breach of conditions," he said.

He said federal parliament should legislate conditions to be imposed on foreign investment.

"If this leads to those changes, then that's the best outcome, frankly, from what's been a very, very poorly managed investment, over the last three or four years," he said.

He said the managers who had left had "vast experience in dairy" right along the north-west coast.

"People would not stand by and see unfold, what has been unfolding before them," he said.

"If someone was not treating animals well, then they were not on those farms," he said.

And another former chief executive David Beca said it was very sad to see what had happened at the company since Mr Lu took over.

"Unfortunately he has only invested a fraction of the capital that he initially committed to invest," Mr Beca said.

"Over time, there appears to have been a continuing deterioration in performance with the recent problems relating to effluent management being the latest manifestation of this."

But in a statement, authorised by Mr Lu, the company said it had increased its number of employees and undertaken capital expenditure on farm operations and land improvement.

"This will continue particularly with the intention to build a milk factory in north-west Tasmania for conversion of liquid milk to powder form for supply and sale domestically and overseas," the statement said.

The company admitted to an issue with overflowing effluent ponds on several farms.

"The Circular Head Council have issued Environmental Protection Notices in relation to effluent systems between December 2020 and March 2021," the statement said.

"VDL is undertaking repairs to the effluent ponds and pumping systems identified in council notices.

"This remedial action is monitored closely by council officers and the company provides the council with regular updates on this remedial work to comply with those notices.

"Recently, the TDIA suspended the operation licence for one of our farms due to the overflowing from the primary solids (effluent) pond," the statement said.

"The 280 cows on this farm (representing 1 per cent of the VDL herd) were moved and milked on a licensed farm.

"There was no risk to the welfare of the animals."

This licence had now been reinstated.

"A responsible dairy business does not treat animals badly," the statement said.

"VDL adopts accepted and standard animal husbandry practices for the health and welfare of its livestock.

"Workers and managers are directed to act quickly when an animal requires treatment, and we have a long-standing business relationship with local vets who respond promptly if the need arises."

The response followed an audit report in which the TDIA said it "had no faith in the management of Van Dairy" in relation to the concerns.

The audit report, published in February, noted 83 per cent of Van Dairy's farms did not meet the Effluent Management Code.

TDIA manager Carolyn Harris said she was unable to comment on specific proceedings at the property, due to the state's privacy legislation.

"However we continue to work with the company, the Environment Protection Authority, and other authorities to ensure compliance," Ms Harris said.

"I think it's a matter of Mr Lu not really understanding dairy farming, if he understood farming a bit better he would probably realise what he has to do," Councillor Quilliam said.

"Because he's lost a lot of the expertise he had, things have just struggled."

He said Mr Lu had sold some of the properties.

"Whether he will end up selling the rest, I don't know," he said.

"I understand he wants to keep some of the farms, but he'll have to clean up the issues he has got."

Former farm manager Dan Garrity, who finished with Van Dairy in February 2020, said at least six managers had resigned in the past three years.

"The structure and culture have eroded, and no one is working to budgets any more," Mr Garrity said.

"When you have a big operation like that, you need budgets, and you need a plan to work to - that all went."

He said he was upset by the changes that had been made.

"It wasn't the way I wanted to farm, and it was time for a change," he said.

"Before that, it was actually very stable.

"I came to the company in early 2014 and over that period of time there was stability and the quality of management improved."