He may be 104 but Ted Mulligan still has plenty of stories to share. Ted Mulligan at home in Guyra where he has lived a life full of service to his community.

But type his name into the search engine and the results are endless.

You'll quickly learn that the 104-year-old is a war veteran, a cricket tragic and a local legend in the small town of Guyra.

There are photos of him in front of namesake ovals and even one of him signing a hat; all just regular duties for a local celebrity and Order of Australia Medalist.

"I'm no different to anyone else, anything I did I liked doing it and I did it for that reason," he said.

"I was never selfish. I think that's one of the main things."

The best details about Ted's life aren't on the internet though.

It was only 12.30pm when The Land visited but a bowl of ice cream, custard and cake was delivered to room one at the Guyra Hospital. One of Ted's favourite horse. He calculates he has ridden more than one million miles on a horse.

His once jampacked days have shrunk meaning the sweet treats are all he managed to fit in before a more appropriate dinner, or tea as he calls it.

Not many people can say they have ridden more than one million miles (1.6 million kilometres) on a horse but when you reach 104, anything is possible.

Ted was born on November 15, 1916 at the old hospital in Armidale, above where the rugby league park sits today, and was the second of seven children.

He grew up on Glenore, just to the west of Guyra, and after jumping on a horse as a toddler he found himself riding to school and across the family property.

He joined the 12th Light Horse Regiment at 20, initially becoming a member of the Armidale Troop and then transferring to Guyra when it was formed.

Ted only rode "good horses", so good that his horse was chosen out of 700 to carry the Governor-General on an inspection of the Northern NSW Troop. He recalled a humorous moment during his second stint with the Light Horse in which he undertook escorts.

"My horse was recognised as the pick of the lot of them, in fact I'd won the champion stockhorse of Australia and the Governor had his wife there and she was a nice youngish girl, maybe mid 20s, and we were opening that memorial, this side of Muswellbrook," he said.

"He reached over and pulled the hat off and she was a good sport otherwise I wouldn't have done it. She thought that was a great joke. 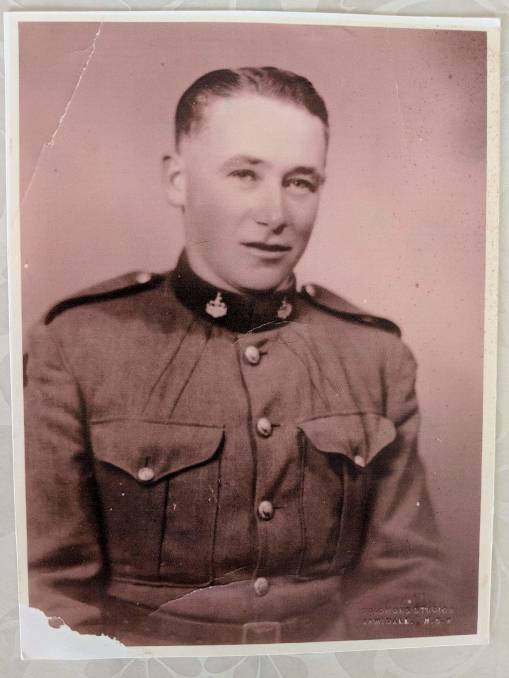 "I wasn't back from the war and I was on the American Liberty Ship and we got into a minefield near Fiji," he recalled.

"The old grandfather, he was dying, and my parents went down to see him and...he said, 'You won't see him because he was on the ship near Fiji and it hit a mine and they were all drowned'.

"Anyway he was very close to the mark but we didn't get drowned. My parents had enough to worry about and I said he was just hallucinating but it was very true...we only got out of it after a day and a half of trying."

His skills as a horsemen weren't overlooked and Ted was tasked with riding Queen Elizabeth's horse at the royal show, winning it while she was in Australia for a visit. At the age of 98 he was still regularly riding 10 miles a day (16 kilometres), often with his great mate Doug Faint.

"We were riding around one morning...and he said I've got a pain in the stomach that shouldn't be there so he went to the doctor after and they sent him to Tamworth and they gave him a month to live," Ted said.

"He was as nice a person as you'd ever come across. We would ride every day."

Sacrifice should be a key word in a Google search for Ted Mulligan. He established the Guyra Pony Club in about 1958 and if a child didn't have a mount, he would find them with one.

In the early days he provided a school for his children and those from neighbouring properties, and along with his wife, Iris, they would feed and accommodate teachers. His biggest sacrifice came on the cricket pitch.

From an early age he had an ambition to play test cricket for Australia but opted to enlist in the army during what could have been the peak of his career in his 20s.

"I got my first century on this ground in Guyra...eventually a fella came up from Sydney and asked me about going to Sydney to play and guaranteed me a couple of games with the state side if I'd go down after a bit of coaching," Ted said.

"That was just what I wanted but it was in the Depression and I couldn't live on fresh air so unfortunately I had to leave it.

"A couple of state selectors said to me you're probably the best batsman outside of Sydney and the best opening batsman in NSW."

Ted played his last A grade game at 66 and even made the Golden Oldies side bound for Canada.

Times were certainly different back then and Ted is unfazed when recounting how he would trap some 40,000 rabbits during the winter.

"People today wouldn't believe what rabbits were like and just after war, they were worth good money for the skins," Ted said.

"A lot of people here in Guyra got a deposit on their house from rabbits, and in a lot of other towns too."

Genetically long-lasting health is on his side with a father who survived to 90, a mother at 84 and a grandfather who reached 97.

His wife, Iris, passed away three years ago in August but he doesn't see himself as any different to anyone else.

His daughter Lorraine Nifty said her father was a very hard worker.

"No one could have worked harder."

Google Ted Mulligan and a lot will come up. It won't tell you though that even at 104 he doesn't have any aches or pains.