Nathan, Daniel and Daryl Hall and Josh Brasser, Moola Pastoral, Cunninyeuk, via Moulamein, have started harvesting their 640 hectares of rice. Their Reiziq is yielding up to 12.5t/ha.

Yields up to 14t/ha reported despite the cold.

After a two-year hiatus due to low water allocations, rice farmers are back in business, starting harvest on the predicted 450,000 tonne crop - more than 10 times the size of the 2020 crop.

Cool weather has meant it has been a slow start in some valleys and SunRice reported that on Monday 44 per cent of the 44,0000 hectares planted in southern NSW were in the process of being harvested.

Despite the less-than-ideal cool temperatures experienced through most of the season and some consequent sterility issues, initial yields are reported to be exceptional in some regions.

Barham agronomist, Alleena Burger, BR and C said she had heard of up to 14 tonnes per hectare of Reiziq being achieved.

"Most seem to be between 10.5t/ha and 12t/ha, which is above the average for this area," Ms Burger said, noting the region had gone from growing virtually no rice last season to harvesting approximately 8800ha this year. 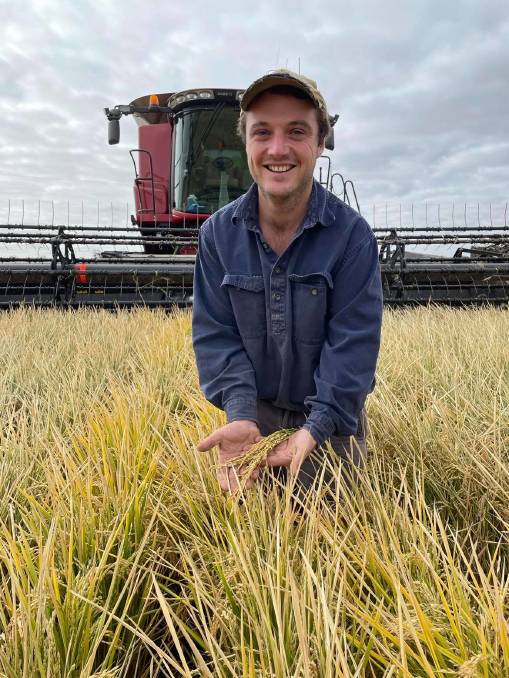 The Hall family of Moola Pastoral, Cunninyeuk, via Moulamein planted 640 hectares of Reiziq and some Viand in October.

Daryl Hall, who has only missed out on growing rice three years in his lifetime - including the last two years - said it was wonderful to be back.

His son, Nathan Hall (pictured on our cover), who farm alongside his dad and brother, Daniel, said they were seeing Reiziq yields of up to 12.5t/ha, with even sterile sections averaging up to 10.2t/ha.

"The cool January and February has knocked us and we expect to see some sterility, but it doesn't seem to be having too much of an impact just yet," Nathan said.

Nathan explained that if night-time temperatures drops below 15 degrees consistently during Panicle Initiation (PI), the start of the reproductive stage, the pollen doesn't form properly, leading to yield losses.

"It's essentially a frost in the crop, but if we can average 10.2t/ha in a sterile crop I'm not complaining," he said.

Like many rice growers, the Halls are in the process of converting to direct drilling instead of aerial sowing to improve water usage and reduce input costs.

Nathan said they work off 14 megalitres a hectare for aerial sown rice and 12ML/ha for direct drilled. The Halls will be harvesting for another six to eight weeks and like most growers will be putting in their winter crop at the same time.

"I always said I missed being busy but now I remember what being busy is like," Nathan said.

The most recent NSW Murray allocation outlook predicted general security allocations would open on zero at the start of the new water year (July 1) and improve to two per cent in September and 12 per cent in November under dry conditions.