Daryl, Kaye and Sean Jenkins were thrilled with the excellent total clearance of bulls and heifers at their 11th Violet Hills Charolais stud sale, Rydal, on Thursday, with bulls heading to four states.

ALL 43 stud bulls sold to a top price of $15,500 and went to new homes in four states while averaging $8312 at the 11th Violet Hills Charolais sale at Rydal on Thursday.

As well, 15 joined heifers sold to $3200 each for a pen of five head to average $3100 while eight unjoined heifers made $2600 for stud principals, Daryl and Kaye Jenkins and son, Sean.

Daryl Jenkins said his family was very appreciative of the strong support from buyers taking all lots.

Bulls went as far north as Taroom, Queensland, Walcha in the New England, Hunter Valley, Far South Coast, four buyers from Victoria and one from Stanley, Tasmania. Also, 10 bulls were purchased by absentee buyers through AuctionsPlus. 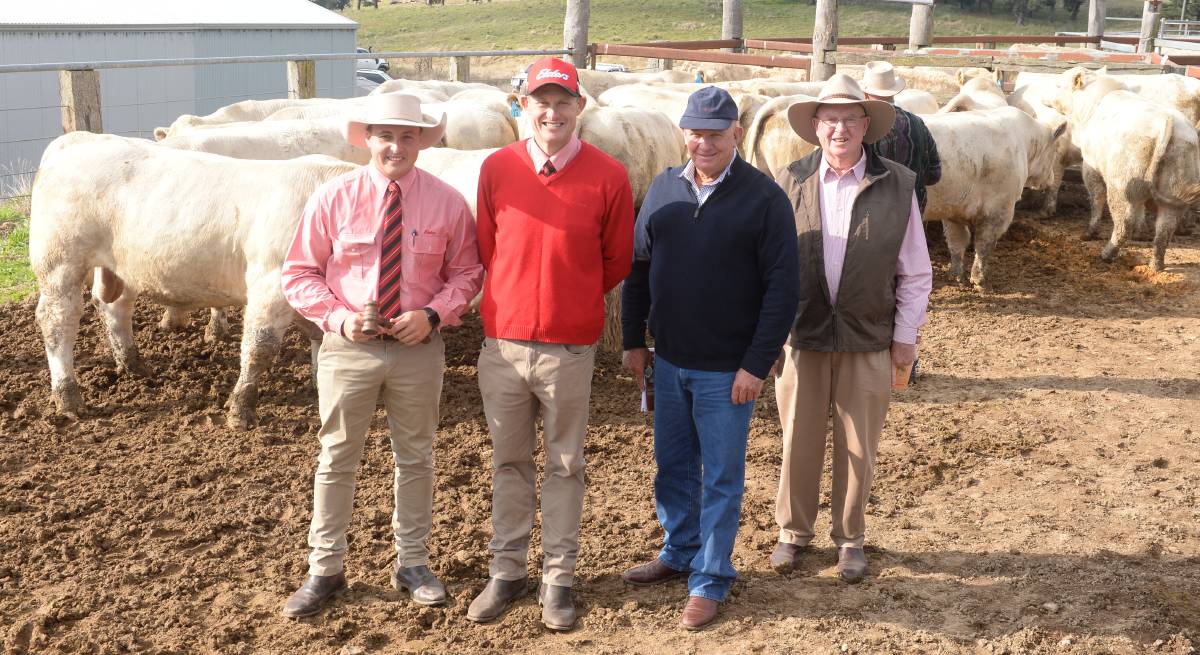 Breeding stud and commercial Charolais for some 40 years, Mike Lawlor of Lawlor Pastoral, Kilkenny Charolais, Taroom, Queensland, selected three bulls to join with 120 heifers, paying an average $13,167 and the top price of $15,000 and second top at $14,000.

Mr Lawlor said the enterprise runs 800 purebred Charolais breeders plus 4000 commercial females producing 200 bulls he sells to western and far-north Queensland while commercial steers and heifers sell a feeders or put on grain to fatten.

"Those feeders normally go back into major feedlot markets in the south-east corner," Mr Lawlor said.

The sale-topper was the polled Violet Hills Q97E by Violet Hills Leindros and from a Violet Hills Jolly Joker sired Naomi dam weighing 686 kilograms at 21 months with 131 square centimetre eye muscle area (EMA) and an Intramuscular fat percentage of five. The bull boasted a combination of good calving ease with a Domestic Index among the top 10pc of the breed.

A north-eastern Victoria store buyer and finisher who has decided to go back into producing vealers and weaners, Will Deuchar of Beltana Enterprises, Kergunyah South, paid a $11,167 average for three bulls topping at $13,500.

Another buyer of three bulls was the Mackaway family's Mackaway Pastoral, Tia River, Walcha, who paid an average of $9000 and up to $10,000 for their trio and the grandsire of two was Violet Hills Jacquard.

He also trades another 1600 steers each year to fatten.

Another Victorian, Peter Miller, Tooradin, who had purchased Violet Hills bulls over a 14 year period, bought two bulls at $9000 and $8500 to join the sire battery for his 400 predominantly Angus breeders.

"We sell to either NH Foods Wingham or JBS Scone and our steers this year averaged well over $2500 with the tops at $2700," Mr Ireland said.

The sale was conducted by Elders Bathurst with Lincoln McKinlay the auctioneer.