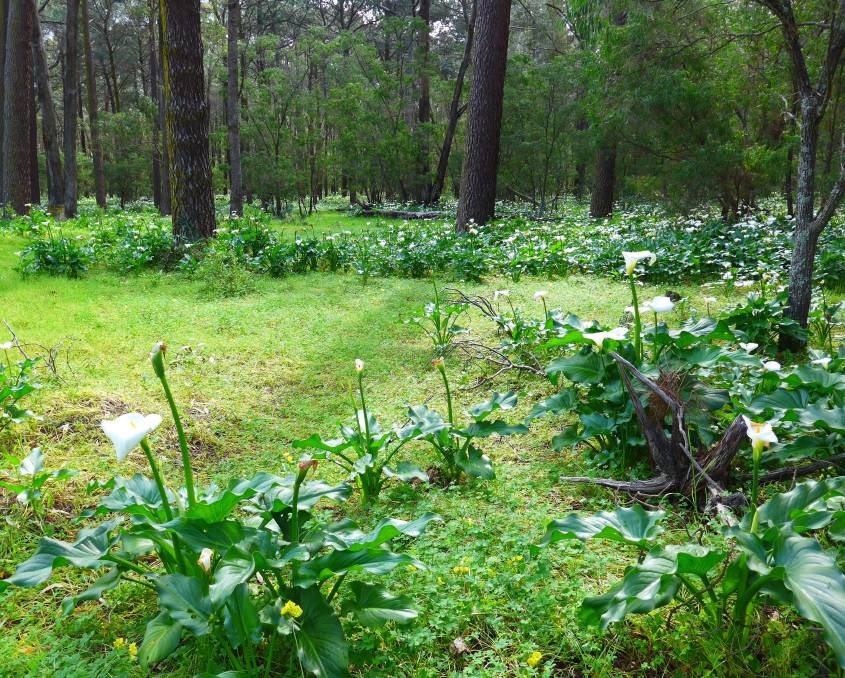 An arum lily introduced in the 19th century from South Africa has become invasive weeds in south western Western Australia.

What is a weed? A popular definition says it's a plant in the wrong place.

Well - does it really matter? you ask.

Plants will always cover the damp forest floor between Bunbury and Augusta, why not arum lilies?

Unfortunately it does matter, enormously, because wherever an introduced plant takes over from the local native species, it destroys the food supply of local birds, animals and insects and ultimately wrecks the local ecology.

The arum is doubly unwelcome because all parts of it are toxic to humans and livestock: it is a declared weed in every state and territory apart from the NT.

All you can say in its favour is that it won't grow in dry conditions or drought, so most regions are safe.

A near relation, Arum italicum 'Pictum', is far more drought tolerant and has become a mega problem for many NSW gardeners, me included.

It was no problem in my garden until a year ago.

Then out of the blue it produced decorative white flower spathes, followed by deadly scarlet berries that lost no time in sprouting everywhere, especially in hard to reach areas beneath multi-stemmed shrubs.

The arum is doubly unwelcome because all parts of it are toxic to humans and livestock: it is a declared weed in every state and territory apart from the NT.

I recommended a good dig as the best way to eliminate it (The Land, 23.5.20), but it's still popping up, so my latest technique is to cut its leaves to the ground, thus starving the bulbs of the nourishment needed for survival.

I got this idea from reading about the Tokachi forest regeneration project in Hokkaido, Japan, where until 20 years ago an introduced bamboo (Sasa) covered the forest floor to a depth of one metre.

In order to clear the ground and allow long-buried seeds to regenerate, the highly invasive bamboo was brought to heel within five years by an annual strim, or chop to ground level.

If it works for bamboo it will work for variegated arum, I hope.

Anything is better than chucking a broad-leaf herbicide around, which is the only alternative. I promise to keep you posted.

Another beautiful plant in the wrong place is poison hemlock (Conium maculatum), a one to two-metre tall biennial with ferny leaves and clusters of lacey white flowers that grows on roadsides.

It closely resembles cow parsley and Queen Anne's Lace but is easily distinguished by unique, pinkish purple streaks on the hollow stems.

Hemlock is highly dangerous not just because it loos alarmingly like parsley, especially to a child, but because to date there is no known antidote to a fatal dose.

Its most famous victim was Socrates, who was sentenced to death in Athens in 393BC for corrupting the young and chose to die by drinking hemlock rather than renounce his beliefs.

Definitely a plant in the wrong place in a garden.

Dan Pearson and Midori Shintani's Tokachi Millennium Forest (2021) tells the wonderful story of a project to save habitats and offset a publisher's carbon footprint.