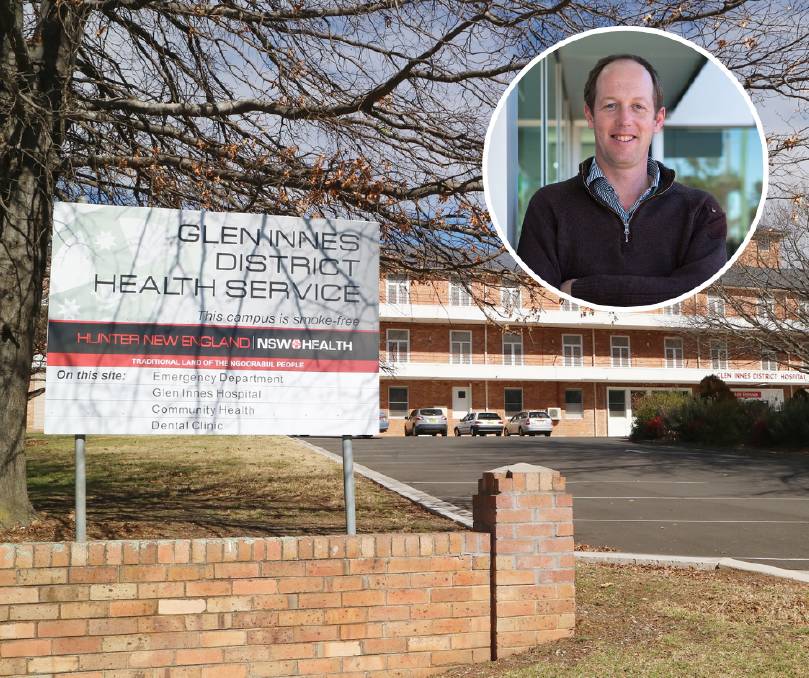 RAISING WARNING: Dr James White has raised the alarm about conditions at the rural hospital, nearly a year after a woman died after presenting while no doctor was on duty. Photo: file

Nearly a year after a woman died after presenting at an emergency room while no doctor was on duty, a local doctor has raised the alarm about "deteriorating" conditions at the rural hospital.

Dr James White will soon be one of just two visiting medical officers (VMOs) covering the Glen Innes Hospital emergency room, down from about 10 in 2020. He is a trainee doctor.

The town was rocked by a tragedy last August, after a local woman died of an aneurysm after presenting at the hospital. The locum doctor who was rostered to provide medical coverage that Saturday night was sick, leaving the emergency room without a single MD (doctor of medicine).

In 2020, Northern Tablelands MP Adam Marshall used NSW parliament to call for a permanent solution for what he said was an "unreliable" system that "relies on outside medical recruitment agencies".

In the months since, conditions have instead deteriorated, Dr White said.

Since he arrived in Glen Innes in 2017 there have been 10 GP VMOs working at the hospital. The hospital's third VMO doctor has put in his resignation and will leave within weeks, he said.

Dr White said it's inevitable there will be another high-level medical emergency, and the hospital is more likely to be unstaffed by a doctor than ever.

"Absolutely. That's the nature of medicine. There'll always be something like that, even an asthma attack, which needs a doctor on site," he said.

"There's been multiple tragedies around not just our district, but in other districts with similar sized hospitals, where a serious presentation has come to hospital and there's no doctor present.

"I'm fearful that in my circumstances it's going to happen to me any time soon. And I don't think the current system will adequately support on-duty doctors in a significant emergency."

Hunter New England has their "heads in the sand" over the problem, he said.

Veteran Glen Innes GP Peter Annetts said there had been a lack of commitment by state government to replacing a retiring generation of doctors.

"The whole system appears to have collapsed. When I came in 1984 all the doctors worked at the hospital. That was expected and that was normal," he said.

He pointed to the Queensland system for a better model. The Sunshine State directly hires and pays doctors to work in public hospitals.

Dr White said government rules actually discouraged doctors from working locally. A GP VMO might earn $600 a day and up to a maximum of $1000 for on-call work at home, but spend their entire life on call. But if they take locum work, they can earn as much as $3500, and have far more control over their hours.

"Twice the work for half the pay and the failure of the Medicare rebate and the hospital rebate to cover the true cost of providing the service," he said.

He said the hospital was on the verge of a death spiral, with more and more burden falling on the handful of GPs left, driving them out faster and faster until there are none left.

The woman struck down with an aneurism died in Tamworth hospital after she was flown to the larger hospital for higher-order care.

"Currently three doctors contribute duties to the emergency department roster, and the remaining coverage is provided by accredited locum doctors," she said.

"In most cases, the hospital understands its locum rostering needs and advertises the opportunity well ahead of time to secure coverage several weeks or months in advance. Where possible, the hospital also works to secure one locum doctor per week to cover the entire on-call period, to provide greater continuity of care.

"All of the district's smaller rural and regional hospitals have business continuity plans in place. In the event of more complex presentations or the temporary unplanned absence of medical coverage, emergency department staff at Armidale and Tamworth hospitals provide specialist support via telehealth cameras to smaller hospitals, including Glen Innes. Telehealth serves the purpose of assisting where there are no doctors available, or when they require specialist support.

"Locum agency and doctor fees are negotiated between the local health district and the agency or locum doctor based on the needs of the service, urgency of the locum placement and duration of the contract. The number of available locum doctors are limited, and hospitals must often agree to higher rates of pay in order to secure medical coverage for their community."

The story GP raises alarm over Glen Innes hospital a year after tragedy first appeared on The Northern Daily Leader.