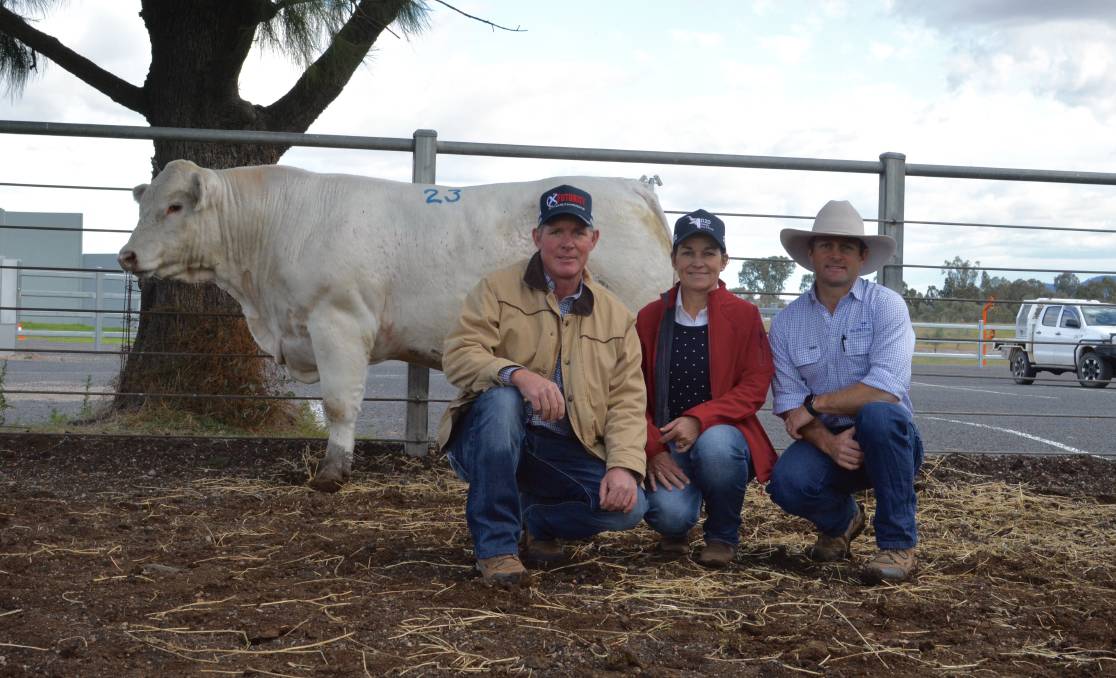 Charolais and Ultrablack bulls demanded the attention of local and interstate producers.

PALGROVE Charolais and Ultrablack bulls boasting exceptional temperament and type were in hot demand from local and interstate buyers today during the stud's Hunter Valley Bull Sale at Scone saleyards, with both offerings topping at $26,000.

Overall it was a full clearance of all 40 Charolais bulls with an average of $14,975 achieved, while the inaugural offering of Ultrablack bulls at the Scone saw 12 sold for an impressive $15,000 average.

Jason and Kylie Catts of Futurity Shorthorns and Charolais, Glen Ayr, Baradine couldn't go past Palgrove Quintessential outlaying the top price of $26,000 for the stand-out sire in the making.

Sired by Paringa Mantra and out of Palgrove Panache L1256E, the 21-month-old boasted a credible data set with 11 traits in the top 10 per cent of the breed including 200-, 400- and 600-day weights, eye muscle area, rump fat, intramuscular fat and the Northern Terminal Index.

A moderate framed, easy fleshing, soft bull, he weighed 768 kilograms with a scrotal circumference of 39cm, fat measurements of eight millimetre and 7mm on the rump and rib, an eye muscle area (EMA) of 133 square centimetres and 4.8pc intramuscular fat (IMF). The inaugural offering of Ultrablack bulls was well received by buyers, with the top price of $26,000 reached when the first son of Suhn's Business Line to sell in Australia went under the hammer.

Palgrove Questa was the embryo-transfer son out of the Twynam H077 female that was knocked down to a Toowoomba, Qld based buyer through AuctionsPlus.

For the first time the Hunter Valley sale also included a commercial offering of around 460 Palgrove infused females.

A pen of 17 pregnancy-tested-in-calf (PTIC) Ultrablack females, 18 to 22 months, from Greylene Partnership sold to a top of $2350 a head to a Queensland buyer through AuctionsPlus. Tim and Sue Davis of Mount Boo, Willow Tree, with Ben Noller, Palgrove. The Davis' purchased a total of 36 Palgrove Pastoral females including a pen of 16 purebred Charolais NSM yearling heifers for $2225 a head.

The Davis' all up purchased 36 females, also adding a pen of 20 Angus Charolais cross NSW yearling females for $1900/hd to their draft.

A Dubbo based online buyer secured all 50 weaners, 9 to 11 months sired by Charolais bulls out of Angus/Hereford females, on offer from Ellerston Station, including the top pen for $1700/hd.

The sale was conduced by Davidson Cameron Clydsdale Taylor & Co with auctioneers Warick Clydsdale selling the females and Luke Scicluna selling the bulls.