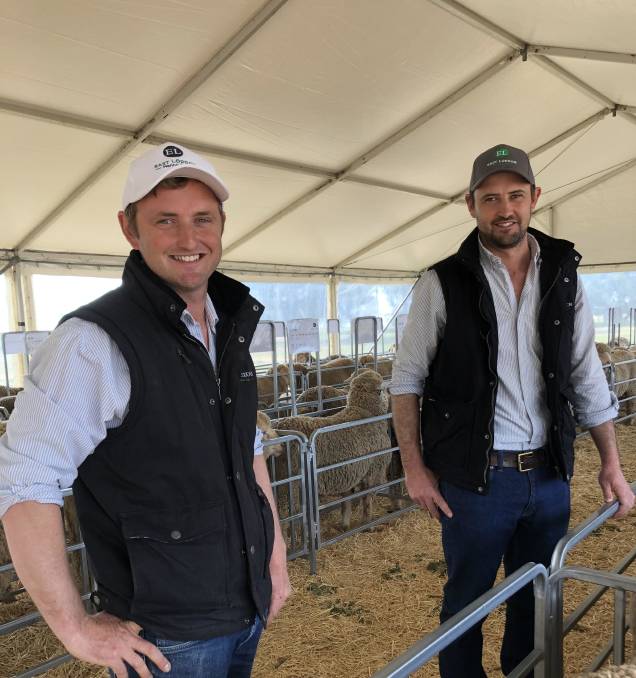 QUALITY: Marcus and Tom Hooke from East Loddon Merinos are seeing increased demand for their genetics in high rainfall areas.

Brothers Tom and Marcus Hook took over the management of the East Loddon Merino stud at Wanganella, NSW, from their parents Bill and Diane six years ago and Tom said they have focused their efforts on producing consistent quality SRS rams which suit a range of environments.

"The SRS system has been part of the East Loddon philosophy for more than 20 years and we are very much about breeding a sheep that's fit for environment," Mr Hooke said.

"For us this means producing a sheep that is absolutely wrinkle-free, doesn't require mulesing, and has a bold crimping, free-growing wool with a long staple length.

"High muscle and fat is also crucial as it enables ewes and their lambs to cope with changes in their environment, resulting in improved lamb survival and weaning rates."

The Hooke's stud flock of 1000 ewes cuts an average of just over seven kilograms per head of 19 micron wool.

High fleece weights have been achieved on a wrinkle-free animal by combining long staple length with high follicle density.

The stud business is run alongside their commercial operation, which comprises a self-replacing flock of 10,000 ewes. 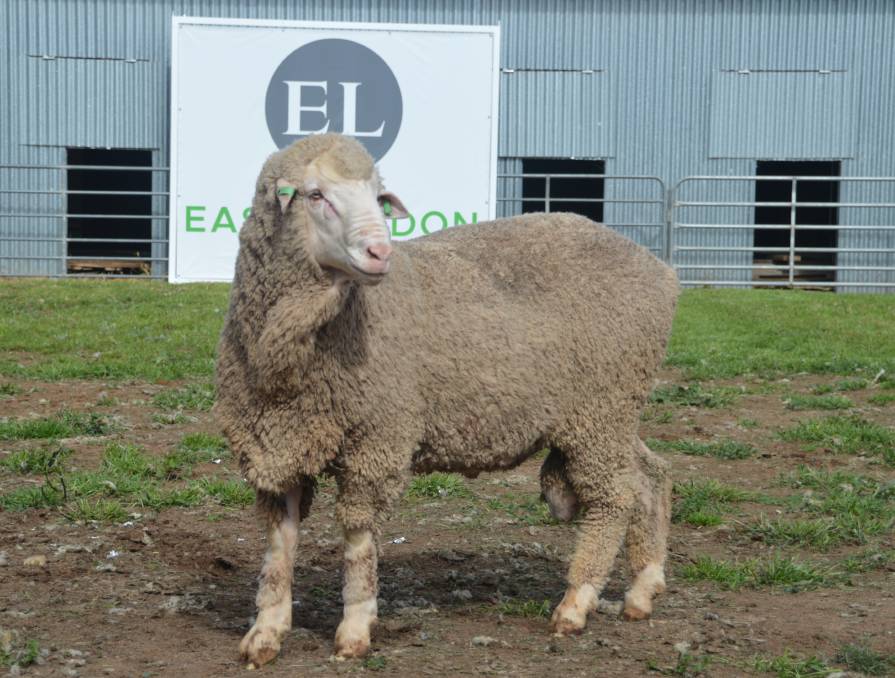 SRS TRAITS: For the first time, this year's East Loddon sale rams will have a breech wrinkle score available.

The stud is also proud to be non-mulesed, a move they made 16 years ago in response to animal welfare issues and future market demands.

"Being non-mulesed is important to us. We are looking to be in this industry for a long time and it just seemed a no-brainer that we had to be working towards a non-mulesed product," Mr Hooke said.

"It's been reassuring to see in the past year, with our own clip and a number of clients, that we've been able to ride out the COVID-19 situation with more certainty.

"The gap in the market in terms of being able to offer certified non-mulesed wool has really opened up.

"There have been premiums for non-mulesed wool and also some very exciting opportunities in terms of direct marketing and forward contracts, there are companies approaching us and they only want to talk non-mulesed."

And as part of their SRS journey, Mr Hooke said they are also looking forward to being part of a newly formed group called SRS Genetics.

Involving 12 Merino stud breeders from across Australia, SRS Genetics aims to continue some of the wool fibre research and development carried out by the late Dr Jim Watts.

"We've been working towards breeding mules-free sheep for decades and I feel where the market is right now we are in the box seat," Mr Hooke said.

"Under the SRS Genetics banner, clients of the stud members will benefit through further research and development and education.

"There will also be opportunities to access group discounts for a raft of wool and sheep husbandry products, for example the purchase of electronic identification tags."

Mr Hooke said their stud enterprise has grown significantly in the past few years, with about 70pc of their clients now located in high rainfall areas.

"It really has happened organically and shows that the wools we are producing are able to withstand high rainfall conditions.

"We've now got clients stretching from the Monaro district down to Ballarat in western Victoria, as well as plenty of local support."

In 2020 they carried out an extensive artificial insemination program and used embryo transfer (ET) technology for the first time, with very successful results.

Some of the ET progeny will be available in this year's ram sale.

East Loddon will hold their third annual on-property sale on Wednesday, September 8, with 60 rams to be offered, along with more than 100 grade rams available.

Mr Hooke said the full suite of Australian Sheep Breeding Values (ASBVs) will be available for all sale rams, including new data on breech wrinkle score, as well as full pedigree and fleece measurements.

"We are pleased to be able to offer a breech wrinkle score as a selection point for clients this season," he said.

"Sheep Genetics results show as a stud we are benchmarking right at the top of the game for that trait.

"There will be a high proportion of sale rams in the top 5 to 10pc for breech wrinkle."