It was necessity which saw Karin Stark and her partner Jon Elder, a fourth generation farmer, look for a solution to a considerable ongoing cost on their 2500 hectare cotton and wheat farm Waverleigh, near Narromine, NSW. 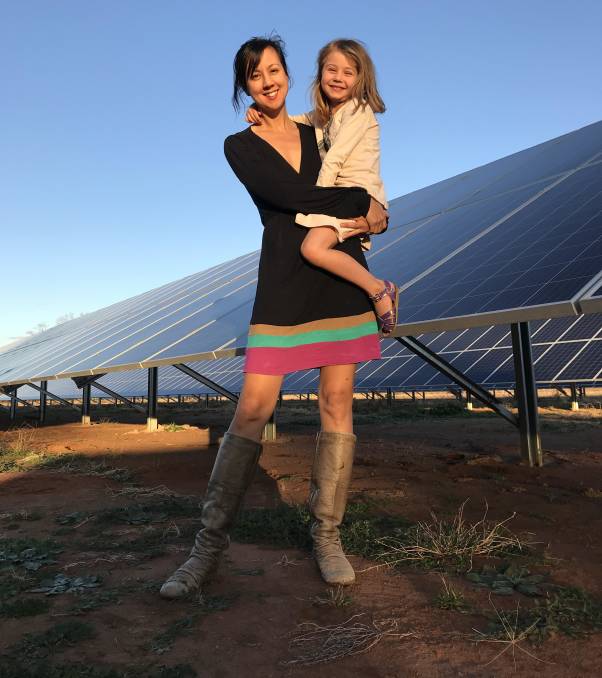 PASSIONATE: Karin Stark with her daughter Noa in front of some of the solar panels which for the 500kW solar diesel hybrid pumping system on Waverleigh.

Necessity is often the driver of change, especially when farming principles are handed down through the generations.

It was necessity which saw Karin Stark and her partner Jon Elder, a fourth generation farmer, look for a solution to a considerable ongoing cost on their 2500 hectare cotton and wheat farm Waverleigh, near Narromine, NSW.

Owned and operated by Jon and his parents, Waverleigh was spending $300,000 a year on pumping diesel for more than 550 hectares of cotton irrigation, an amount which has been cut by more than half after Karin and Jon installed a 500kW solar diesel hybrid pumping system - one of the biggest in the country.

It was a move which appealed to Karin, not only for the monetary benefits, as she has a Degree in Environmental Science and Sustainable Development.

"Jon and I have been on Waverleigh for about 10 years now with cotton our main game," Karin said.

"We are very lucky we have ground water to grow cotton.

"When I was working for the government, I was at a seminar and one of the businesses there came and quoted us on our new system which is saving us approximately $170,000 a year - making it on track to pay for itself in five years time.

"It has also cut our carbon-dioxide emissions by 500 tonnes a year.

"So not only are we seeing the benefits financially, but we have made our farm more sustainable in the process.

"We were also able to apply for a Large-scale Generation Certificate (LGC), making us the first cotton farm to be accredited as power station by the clean energy regulator.

"We launched the system to a lot of fanfare with agricultural ministers and president of the National Farmers Federation, Fiona Simpson, all in attendance.

"It was seen as a big step change in irrigated agriculture and quite transformational. It hasn't all been plain sailing, we have had some teething issues, but it has definitely been worthwhile."

Karin Stark's work in renewables and sustainability saw her become a finalist in the 2019 NSW-ACT Agrifuture's Rural Womens Award.

She founded the National Renewables in Agriculture Conference and Expo to help give like-minded farmers a platform to talk about their experiences to other farmers.

After getting 250 registrations for the first conference at Wagga Wagga in 2019, Karin was concerned that with COVID-19 causing the 2020 event to be cancelled, there may not be as many registrations this year.

"I founded the conference for farmers to share stories with each other and bring them together with renewable energy businesses, agribusiness and policy makers in the government," she said.

"This year we were lucky with the timing and I ran it in May at Dubbo, getting 350 registrations."

"My consultancy business focuses on building capacity and increasing knowledge in the renewables space, particularly with agriculture," she said.