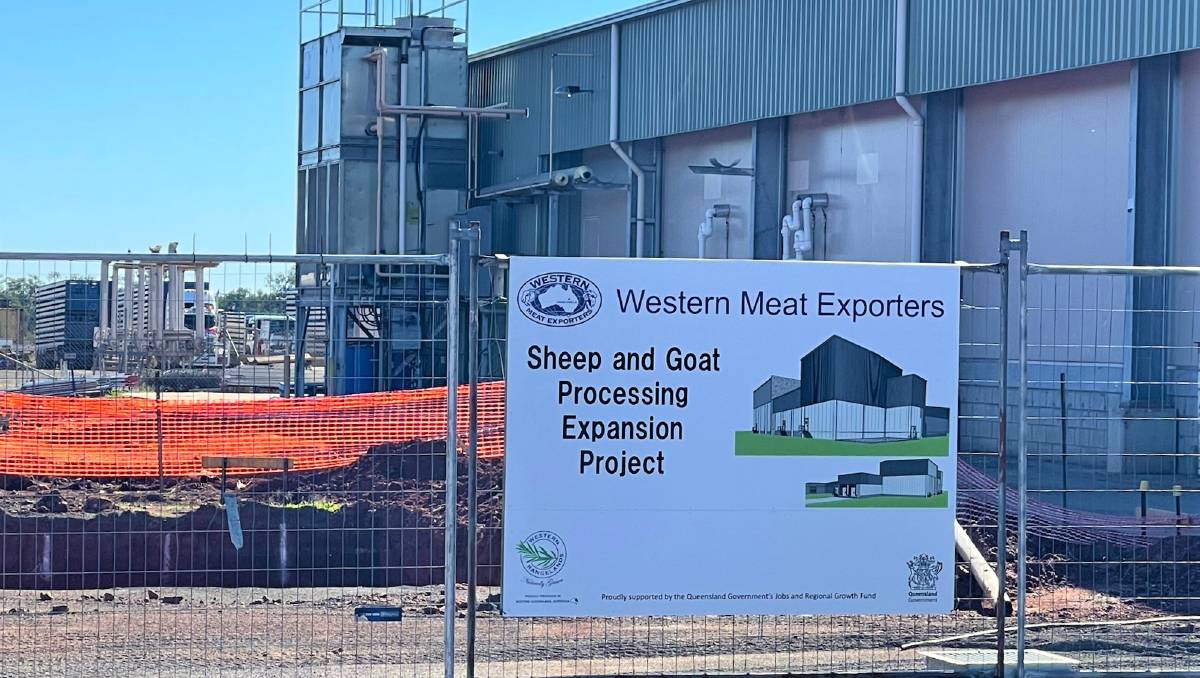 The expansion plans at Western Meat Exporters' Charleville base are going ahead with confidence. Photo supplied.

In the wake of the historic in-principle agreement of an Australia-United Kingdom Free Trade Agreement announced at the end of June, Western Meat Exporters at Charleville is negotiating for the market for skin-on goat meat to be included.

In the wake of the historic in-principle agreement of an Australia-United Kingdom Free Trade Agreement announced at the end of June, Western Meat Exporters at Charleville is negotiating for the market for skin-on goat meat to be included.

Managing director Campbell McPhee said the deal as a whole was very good news for Australia's red meat industry, providing immediate access to a duty-free quota of 25,000 tonnes, rising to 75,000 tonnes in 10 years.

"We are negotiating to get all our products in and remove certain technical barriers," he said. "We'd like to open the skin-on market in the UK, where there's a big demand from ethnic communities there."

Once the deal is ratified, an agreed amount of Australian beef, sheep meat and goat meat products exported to the UK under a tariff rate quota regime will enter tariff-free, but at present this doesn't include one of WME's most popular products.

Mr McPhee said it was a technical barrier that they had been unable to overcome with the EU despite protracted negotiations.

"When the UK was tied up with the EU, they didn't allow skin-on product to enter, except for pork," he said. "The UK seems to be more open to this now so we're hoping to get this across the line."

Mr McPhee said COVID-19 barriers had interrupted the negotiating process, being undertaken in partnership with the Australian Meat Industry Council and with the support of the federal government and MLA, and ways around planned on-site inspections had to be found.

"We already send a lot of skin-on meat to the US, Canada, Japan, Korea - we hope we're on the final leg with this now," he said.

AMIC's general manager for processing and export, Mary Wu said import models had been based around sheep, and goat meat was totally different.

"This is a totally new product, we're not talking about pour-ons or chemical residue," she said.

"We're working with the British to understand the differences.

"It's a new commodity type so new baseline protocols have to be established."

Mr McPhee, who was a member of MLA's UK access taskforce, surmised that the skin-on goat meat product had been left out of deals years ago because it was such a small industry at the time.

"But what we're proposing is no threat to industry in the UK - they don't have a market they're trying to protect."

Mr McPhee said the FTA had justified WME's Charleville expansion work, which was well underway and hopeful of a May 2022 completion.

The $9 million expansion for the state's largest commercial-scale sheep and goat abattoir was announced at the end of February.

Worker numbers have already increased at the plant from 144 to 175 and it's expected this will grow to 210 over the next couple of years.

Mr McPhee said the pandemic had changed the way they sourced staff, with what were once seasonal workers now in Australia on a more permanent basis.

"We are exhausting the local workforce as much as possible, and offering work experience and running school trade fairs," he said. "The traditional methods of recruiting have certainly changed."

WME has also utilised the Pacific Labour Scheme, which Mr McPhee said was a very energetic group of people with a great ability to catch on to job requirements and turn up to work every day.