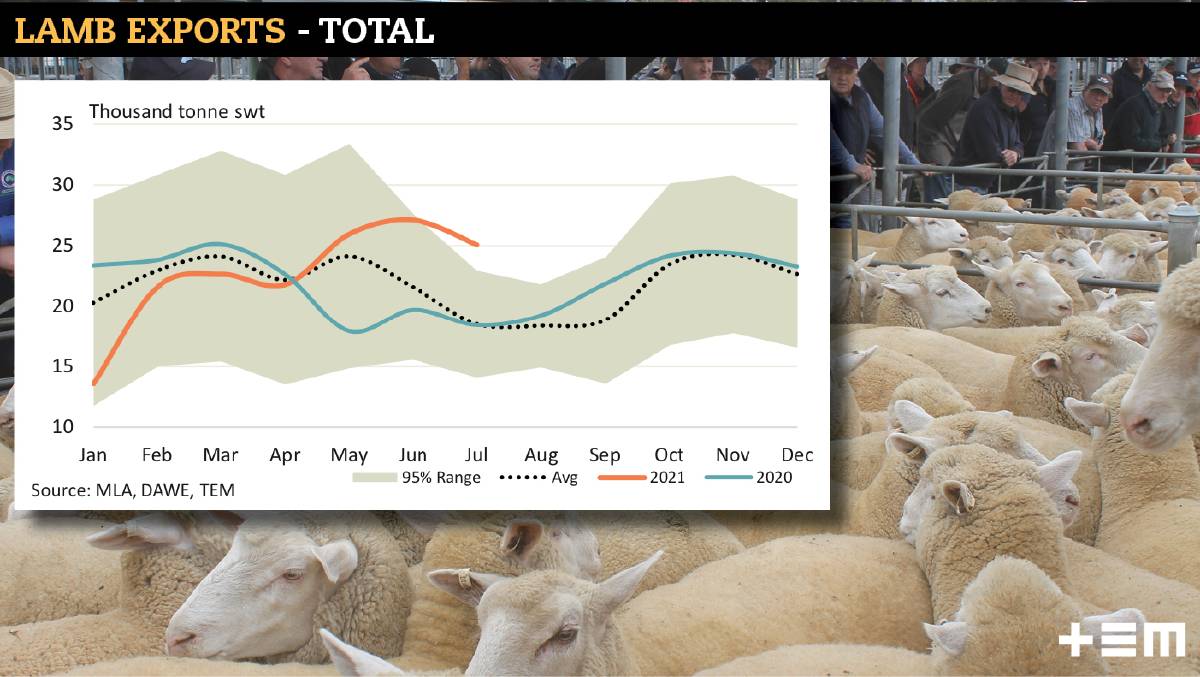 HIGHER: Despite the lower lamb export flows July 2021 managed to record 25,066 tonnes shipped weight consigned, which is 35pc higher than the five-year average for July.

After a bumpy start to 2021 Aussie lamb exports have rocketed.

After a bumpy start to 2021, where export volumes were initially down in January, Aussie lamb exports have rocketed.

And the key drivers of the hunger is coming from the United States and China.

Lamb export trade flows to the US were particularly strong, but a solid result to China and "other destinations" also helped support the total trade volumes.

This is thanks to life in the US is returning to normal due to high vaccination rates, particularly in the adult population.

According to the latest data from Thomas Elder Markets, lamb export consignments from Australia to the US posted a 19pc gain on volumes from May.

"Australian lamb exports to the USA in July is around 5500 tonnes (swt), so the export flows seen recently are sitting nearly 1500 tonnes above levels that would already be considered extreme," Thomas Elder Markets Analyst Matt Dalgleish said.

"Additionally, lamb export flows to China are performing reasonably well too with the July volumes of 6421 tonnes sitting 49pc above the five-year July average.

"The level of Chinese demand for Aussie lamb remains outside the upper end of the normal seasonal range despite July registering a 12pc dip from the figures reported for June."

Lamb exports to China for the year-to-date were 7.4pc lower than 2020 and although total Australian lamb export volumes for July eased nearly 8pc over for the month, this was off the back of very strong levels based on the normal seasonal volumes seen during winter.

Despite the lower lamb export flows, July 2021 managed to record 25,066 tonnes shipped weight (swt) consigned, which is 35pc higher than the five-year average for July. Capping off a solid performance all round for the Australian lamb export sector was the trend shown by all other export destinations, once the two largest players of the US and China were removed.

Lamb exports to "other" countries trekked sideways during July to register 11,657 tonnes consigned.

"That's a level that is at the top of the normal range that could be expected for this time in the season and around 14pc above the July five-year average level," Mr Dalgleish said.

According to Rural Bank's regional manager agribusiness NSW Tony Williams demand from the US could strengthen even more as the recovery from COVID-19 continues to rally.

"Chinese demand is likely to remain firm as the impacts of African Swine Fever will continue to drive increased meat imports, while a lack of alternative suppliers should keep Australian sheepmeat in favour," Mr Williams said. 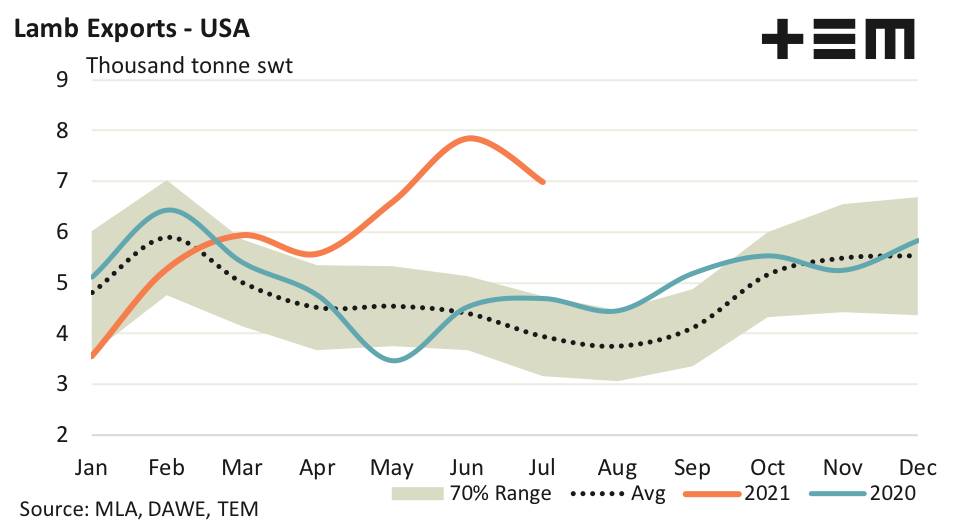 He said demand in the region is expected to remain subdued until significant international travel resumes to bring tourism to the region and improve air freight capacity and costs.

Helping push the market along in the future will be continued support from the US and China as well as significant lamb demand from Middle Eastern food service channels still poised to return to normal levels as far out as next year. This is indicative to more demand out there for the red meat.