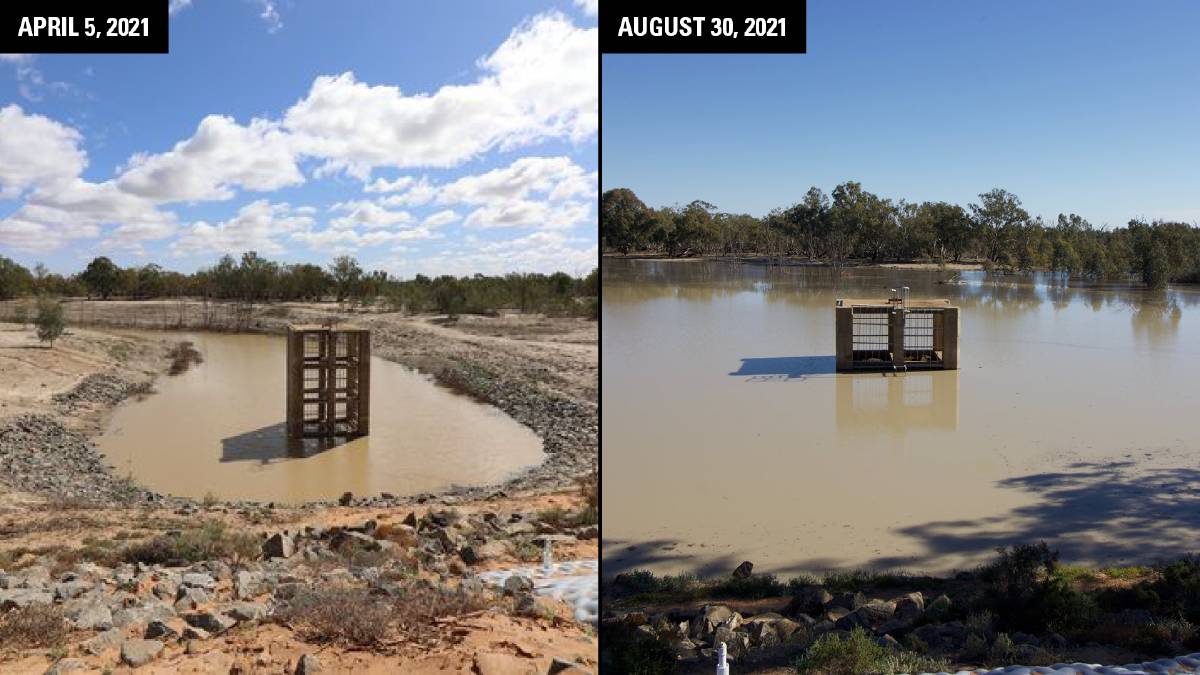 The difference four months can make. The Menindee Lake Outlet on April 5 and August 30 this year. The Menindee Lakes are expected to reach full capacity in the coming weeks. Photos: Michael Minns Photography Menindee

Minor and moderate flood warnings issued across the state.

In the coming weeks the Menindee Lakes system is expected to fill for the first time since 2012.

The WaterNSW Water Insights website showed the Lakes were 95 per cent full on Monday, holding 1541 gigalitres and receiving 20GL of inflows a day.

WaterNSW stated the 100 per cent full supply level (1730GL) was estimated to be reached by mid September, with peak surcharges of up to 2000GL estimated to occur in mid-October.

Lake Meindee itself was at 94pc full on Wednesday, holding 546GL, rising 10 per cent since last Wednesday. While, Lake Pamamaroo has already reached 100pc capacity, recording 252GL on Monday, or 106pc.

Water arrived at Lake Menindee for the first time since 2017 earlier this year and the Lakes have continued to fill despite some releases authorised by the MDBA to support downstream water requirements.

On August 27 WaterNSW announced releases from Lake Wetherell would be gradually increased from 500 megalitres a day to 1200ML a day.

The flow rate of the Darling River at Weir 32 has been increasing in the last week, moving from 806ML a day to 1235ML/day.

The Lakes system filling is a welcome sight for residents of Menindee's Sunset Strip.

Last week Sunset Strip resident Ross Leddra said the water was now only 20 metres from his lawn on the banks of Lake Menindee.

"The birds are starting to return, people are walking around the Strip with smiles on their faces," Mr Leddra said.

Flood warnings across the state

Meanwhile, the Bureau of Meteorology (BOM) has issued minor flood warnings for the Namoi, Belubula, Snowy River and Murray River upstream of Lake Hume following widespread rain across the state.

There is also a minor to moderate flood warning for the Lachlan River, with moderate flooding at Jemalong and possible at Cottons Weir and minor flooding likely for Forbes.

The Murray River (downstream of Lake Hume to Tocumwal) also received an initial flood warning with minor floods expected at Corowa from Monday.

BOM stated releases from Hume Dam to manage high inflows from the Murray and Mitta Mitta Rivers upstream, combined with increased inflow from the Kiewa River was expected to result in minor flooding.

"The MDBA increased releases to 10 GL per day on Friday to manage airspace within Hume Dam in response to forecast rainfall. Releases increased to 22 GL per day on Saturday ... as significant stream flow responses were observed," Mr Reynolds said.

Mr Reynolds said by releasing water, the MDBA reduced the flood peak from close to 70GL a day, down to 22GL downstream of Hume Dam.