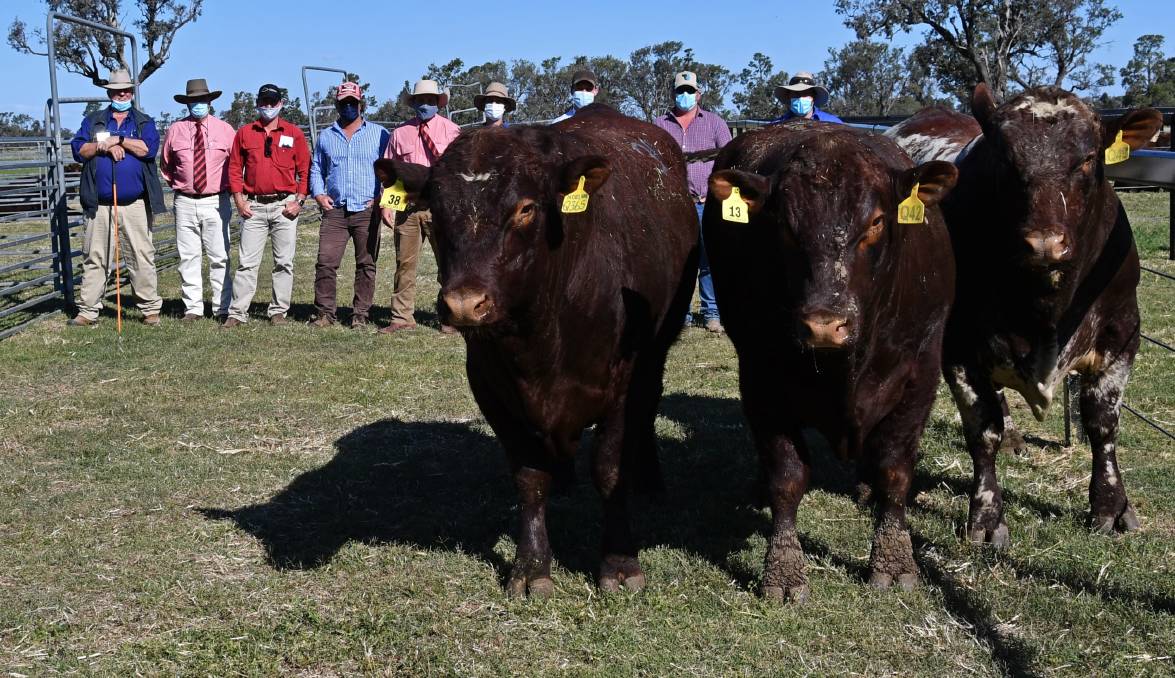 THE competition of loyal return buyers and new clients helped propel Weebollabolla Shorthorn stud to one of its best ever sale results on Friday.

Warm spring sunshine greeted buyers to the Moree operation's 54th annual sale, as bidders from across the state flocked to the historic saleyards and many more followed the sale online via Elite Livestock Auctions.

The Munro and Jeffrey families offered and sold 59 rising-two-year-old bulls during the live auction for a perfect clearance rate and an impressive average of $11,754.

Buyer Chris Francis said his family had been purchasing bulls from Weebollabolla for almost 40 years and this bull would fit into the family's operation seamlessly.

"We are really impressed with Quake's shape and quantity of red meat," Mr Francis told The Land.

"We are excited to see his offspring and expect him to produce ideal females plus bull calves, which may end up in Queensland where we have been supplying bulls to Marellan Shorthorns, Emerald, to supplement their own numbers.

"The Weebollabolla blood is doing a terrific job for them as they are functional and survive under those extreme selection pressures."

"I think his overall skin type, his balance and numbers really made him standout in the paddock," Mrs Jeffrey said.

"He's the sort of bull that always catches your eye and there were plenty of bulls that weren't far behind him price wise, but I think maybe his roan colour and his nice slick skin might have got him across the line."

The top selling bull was one of three bulls purchased by C and P Francis and Sons at an average of $18,666.

"We were really pleased with the versatility of our bulls this year and I think that is reflected in where the bulls are going to such as places in Tasmania, across NSW and into Queensland," Mrs Jeffrey said.

"It's also really pleasing to see strong demand for our bulls from not just commercial buyers but from other studs such as Turanville in Scone, Royalla in Yeoval and The Grove in Barramornie, Queensland."

Friday's sale also marked a first for the Moree operation as it offered six heifers which all sold at an average of $8500 and to of top of $11,000, which was paid for Weebollabolla Fate Q454 by Turanville Shorhorn stud, Scone.

Weebollabolla also offered 10 semen straws which sold for $90 per straw.

"The prices were very strong for the heifers, which was really pleasing to see," Mrs Jeffrey said.

"We had an opportunity by chance to offer them this year, it wasn't completely planned but it was fate.

"We were planning on doing an artificial insemination program on some of them but that just didn't eventuate, so it worked out really well."