Overall the Corcoran family of sold Poll Dorset rams to buyers across four Australian states and internationally into Brazil. 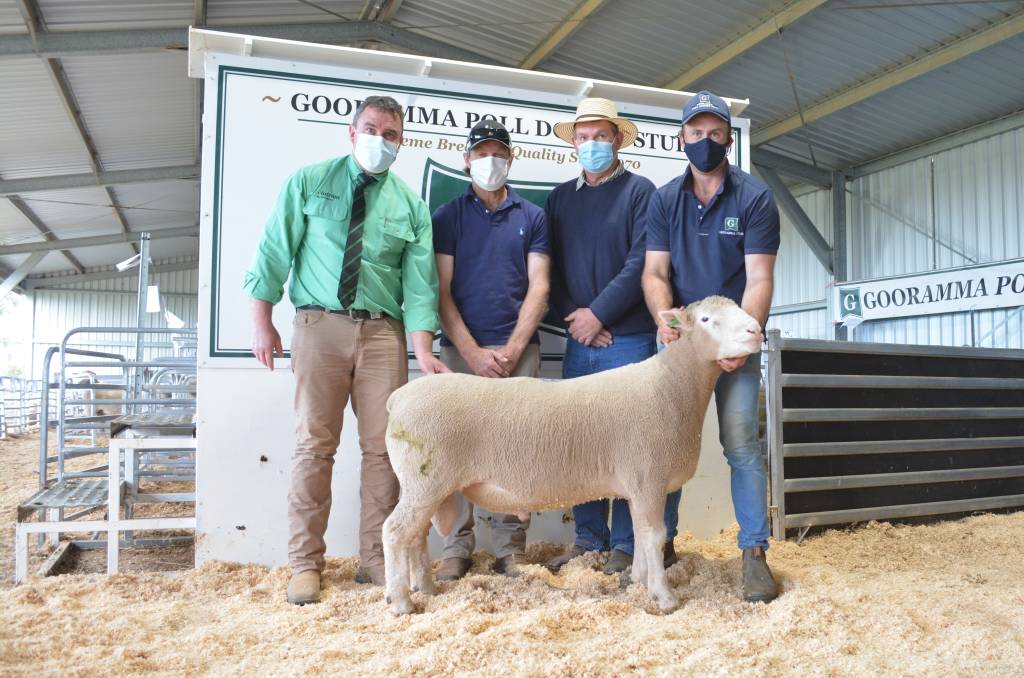 Gooramma Poll Dorset stud sold rams to buyers across four states and even further afield to Brazil during their annual ram sale held at Galong near Boorowa today.

Interest from a number of leading studs drove prices to five figures, but a sale highlight was international buyer Mr Homero from Rancho Miguel Poll Dorset stud, Brazil operating through the draft.

Purchasing two rams at $10,000 each, Mr Homero had previously used Gooramma genetics exclusively within Brazil and is taking the next step to purchase rams.

The early growth, depth and Dorset type of the top ram was what drew the buyers in.

"I like his Dorset type and features, and his good balanced figures," repeat buyer Mr Dixon said. "He will be used over well-balanced figured ewes within our stud. He has good eye muscle so will be put over high-growth ewes."

"I liked his Dorset head. He is a well-balanced sheep that handles himself well, has depth of body, depth of flank and depth of hindquarter," he said.

"He is a sheep that will complement the line of ewes we have bred out of (Gooramma) 682 - a ram we bought in 2019 - whose daughters are coming in this year.

"Yesterday [Thursday] we lost (Gooramma) Ribeye 220-2017, so we were chasing a ram to go over the 682 daughters and we thought this ram would complement them, adding style and growth."

Gooramma co-principal James Corcoran Jnr said the sale was backed by regular clients and new faces looking at early maturing rams, and second time buyers that were happy with how the progeny of previous rams they had purchased are looking.

"The line-up of rams reflect what we are trying to achieve in our breeding program, and it is satisfying that what we are doing is what our clients want," Mr Corcoran said.

"We have always aimed to provide rams that are fit and healthy, and ready to use as soon as our clients get them home.

"While we are using as many breeding tools as possible, we are still keeping a close eye of muscle and early maturity to ensure those traits are always coming through.

"Rams with muscle shape, that were moderate with fat cover and early fleshing ability sold sell."

The sale was conducted by Bassingthwaighte Livestock and Property Marketing (BLM), Cootamundra, and Nutrien with auctioneers Rick Power and Tim Woodham of Nutrien, and Lach Bassingthwaighte of BLM.