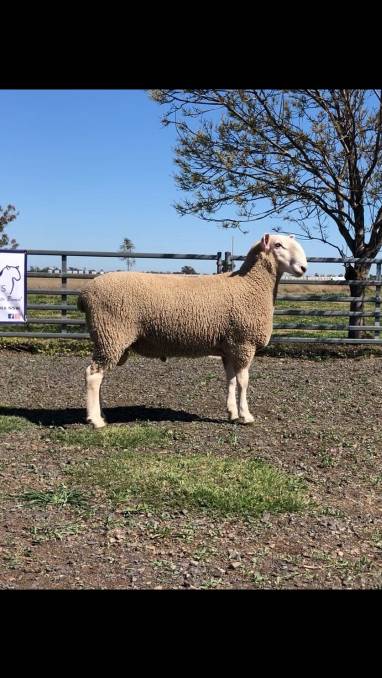 Cooinda 200007 was one of the $6200 top-priced rams sold Normanhurst stud, Boorowa. Photo: supplied

A record number of buyers attended, while bidding online pushed the prices to new heights for the stud.

Also paying top-dollar was the first-time buyer Campbell Roweth from the newly established Basalt Border Leicester stud, Blayney. Mr Roweth's choice of Cooinda 200111, a July 2020-drop son of New Armatree 18/116 had figures 0.40 for BWT, 6.66 for WWT and a Border Leicester Cross Index of 138.57.

"We are very happy with this ram," he said. "Last spring I bought a few stud ewes from Victoria and needed a new ram. He is a very deep ram, and he has good length and a very good body and a stylish head to match.

"A lot of my ewes are from Johnos (stud in SA) and when I went to Dubbo Show I picked him out there. Luckily, he was in the sale, I knew what I wanted. He has grown out to be a very nice ram."

Stud co-principal Cherie Pagan was completely blown away by the results.

"It was unexpected, we knew the clearance was possibly going to be good this year, " she said. "The support and number of registered buyers and the prices were unexpected but very much appreciated.

"Both of the two top rams were in our show team, the first top lot was a big strong ram, it will be good to see how he performs, the other top price ram was a very early maturing ram, I know the buyer who got him was very keen on him.

"The stud interests caught me off guard, it is very encouraging to know that people are wanting to buy your genetics."