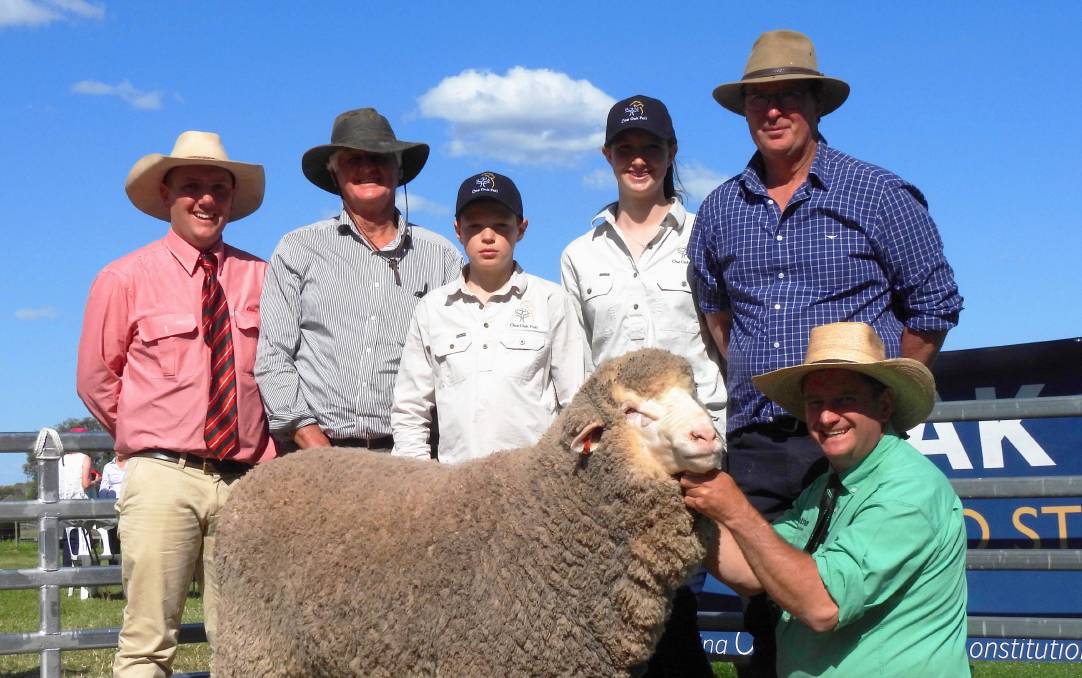 One Oak Poll Merino sold to a record auction price Friday on-farm at Jerilderie, with their top ram selling to $28,000 or nearly double last year's top.

This most wanted stud sire was described as an all 'rounder with a balance of quality and volume in wool and meat', by Mr Wells.

His wool measured 19.1 micron with a standard deviation of 3.3 and a coefficient of variation of fibre diameter of 17.3.

The ram was DNA tested and is by Red-31, out of a special stud medium wool ewe.

Stud principal Alistair Wells said that R19137 had a balance of meat and wool that will breed on and exhibited a level of comfort factor that reflected the stud's ambitions.

This younger ram was described as presenting with deeply crimped elite wool through to his points and underline. Carcase-wise he was square, solid and had the potential to easily fatten. His micron was 18.9 with a 2.9 SD and a CV of 15.3.

There were two lots that sold to $9000 including lot 11, R19136 with "free-combing, gutsy wool on a well put together and good doing body". His fleece measured 18.9 micron with a standard deviation of 3.5.

Mr Wells said embryo transfer had served One Oak Poll very well, and was worth the expense.

"Artifical insemination is cheaper upfront but less effective. With ET the genetics of both sides are dominant," he said.

Mr Wells with his wife Natasha and their children Amelia and Lachlan were thrilled with the sale result.

The sale was settled by Elders Jerilderie in association with Nutrien, Deniliquin.

Rams attract the bids as selling season goes off

What to do with carpet wool