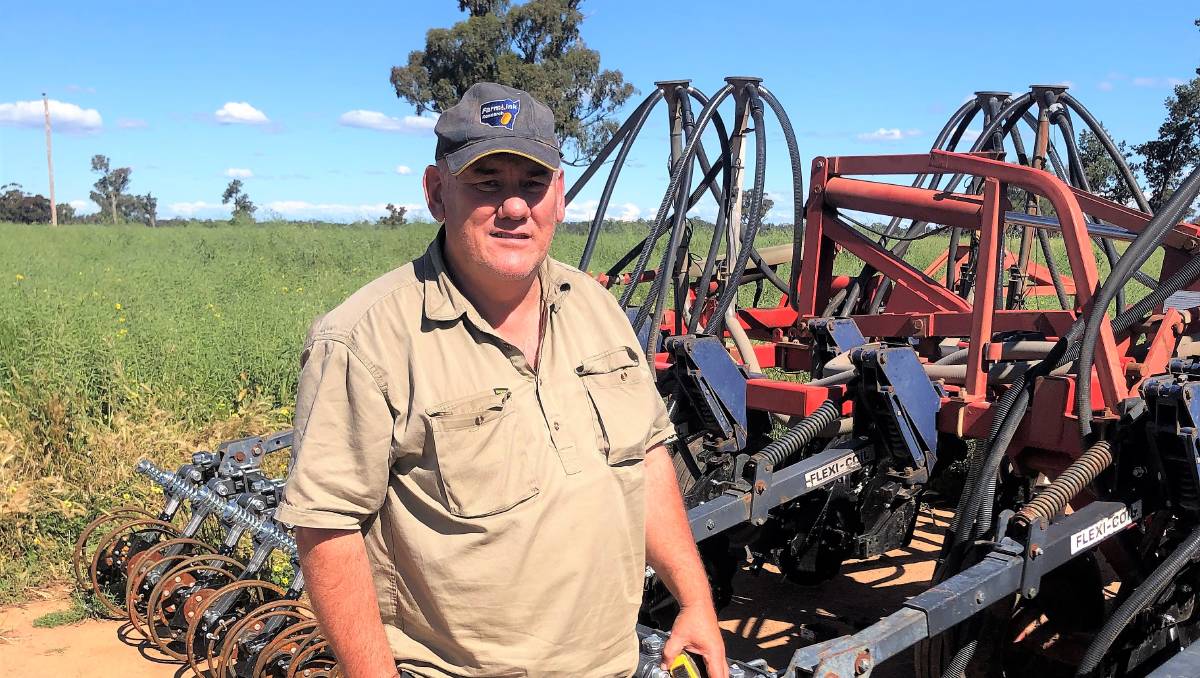 Lyndon McNab is still a few weeks away from harvest but said things on the cropping front had certainly 'turned around' in recent years.

Don't ask Lyndon McNab what yields he expects from this year's winter crops - harvest is still more than a month away and he's not one for counting the proverbial chickens before they hatch.

Softer seasonal conditions mean the crops are "still pretty green here" and he expects harvest to begin a week or two later than usual.

Mr McNab farms 320ha near Quandialla, in the Central West region of NSW, where he produces cereal grain and hay, and a range of pulse crops.

The spread of winter crops for 2021 is 60 per cent cereals, which includes Lancer and Coota wheat, 30 per cent Spark TT canola and 10 per cent PBA Bateman lupins.

There's also fallow ground earmarked for summer crops: 40ha of sorghum, 70ha of mung beans and possibly a 50ha double crop of sunflowers, if the wheat comes off in time.

This year's crops were sown with a Morris Concept 2000 air seeder and tynes on 300mm row spacings.

The air seeder has since been retrofitted with a Ryan NT double disc and press wheels system which will be used for the summer crops.

Mr McNab had intended to sow chickpeas as a spring crop, but that paddock stayed too wet for too long, so he'll plant sorghum there instead as soon as it's dry enough.

Soils on the home block vary from black self-mulching to sandy loam, while a second block of undulating country has more loamy soils.

Rainfall during the year has refilled the soil profile and by the end of September added up to more than 110 per cent of the full year average of 525mm.

"On our soil type, even though we're south and we tend to get winter rainfall, when you start drawing down on the heavier country it's really hard," he said.

"You need a wet year to top it up and that was the challenge. I think 2019 was actually better than 2018 because we had a reasonable start and then we actually had something to bale. Last year it turned it around a bit.

"This year it's obviously turned around a bit more."

A long-time fan of pulses, Mr McNab said they were easy to grow, a good fit for his cropping system and can be stored on-farm. 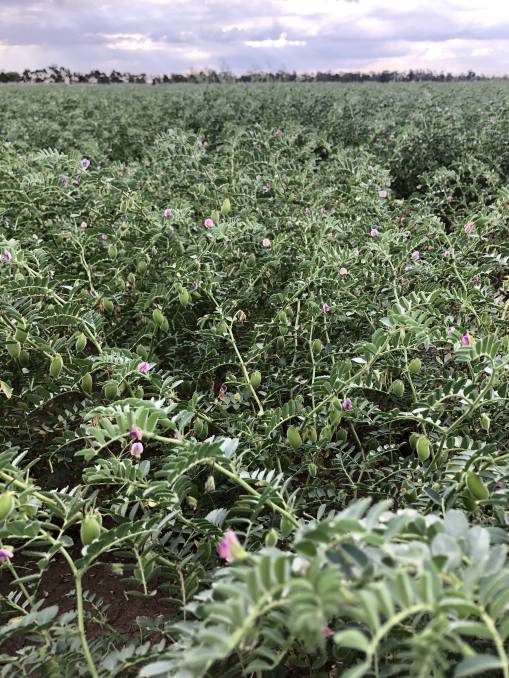 Mr McNab's 2020 chickpea crop, pictured in October 2020. The paddock was flooded in the winter but bounced back ahead of harvest.

They're also increasingly being used with canola to provide a double-break against weeds and disease between cereal crops.

"Because canola's one of the more expensive crops to grow, growing it after a pulse is one way to take advantage of the nitrogen benefit," he said.

The only drawback to pulses was finding buyers, which requires more effort.

"There needs to be a lot more done on the marketing side, particularly for things like faba beans," he said.

"There's a massive benefit in growing faba beans, but if growers produce a lot they can quickly saturate the market."

Related reading: Hyper excitement: how to drag in big yield with moderate rain

Monitoring has found small amounts of rust in the Coota wheat but no major disease outbreaks that needed spraying.

Unfortunately, weeds became a challenge in the lupins because the soil was too wet for spraying, but Overwatch applied pre-emergent under the canola and wheat successfully kept ryegrass at bay in those crops.

Indeed, Mr McNab goes so far as to nominate the canola as his best-looking crop right now.

"I never dreamed I'd ever say that," he said. "It's unbelievable!"

After farming for almost 30 years, initially as part of a family partnership and solo since 2018, Mr McNab said he'd learned the value of resilience and being proactive, not reactive.

He's already preparing for the next drought by addressing soil constraints - things that will help in dry times - and applying variable rate lime and gypsum, as well as lime at depth.

Several years ago he bought a 4.25m K-Line Ag Speedchisel with a disc-tyne-roller combination for incorporating lime at depths of 200-250mm to address acid throttle, which is the formation of an acid layer in soil that restricts root growth, especially in pulses.

"Pulse crops have been like the canary in the coal mine," Mr McNab said.

"The NSW DPI, FarmLink and other groups have been doing a lot of work on it.

"That's why I bought that machine. Because it's a strategic tillage, it's not something you do every year, so now I make it available for dry hire."