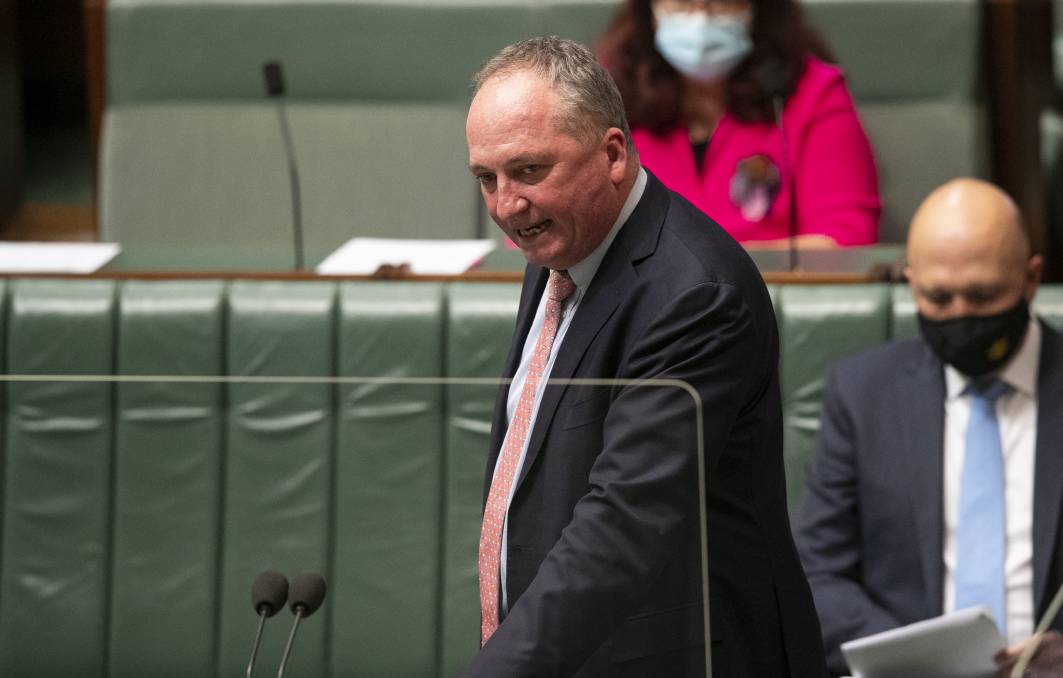 SHOW ME THE MONEY: Barnaby Joyce and the Nationals want a regional cash splash in exchange for supporting a net-zero target. Photo: Keegan Carroll

When deputy Nationals leader David Littleproud was asked what the party needed in exchange for its support, he responded "money makes the world go around, mate".

NATIONALS politicians will give the Prime Minister their verdict on the 2050 net-zero emissions plan by Thursday, Deputy Prime Minister Barnaby Joyce says.

The Nationals are expected to agree to the government's climate action plan, however the finer details - and what compensation for regional Australia the Nationals can extract from the Liberals - are still the subject of wheeling and dealing.

"It's not a case of holding anyone to ransom, or anything like that," Mr Joyce said.

However, when deputy Nationals leader David Littleproud was asked what the party needed in exchange for its support, he responded "money makes the world go around, mate".

"We don't want to ask for billions of dollars, that is not responsible," Mr Littleproud said.

"We can achieve it by being smarter than that and using the mechanisms that are already there rather than going for a cash grab."

National Farmers' Federation president Fiona Simson said without the 2050 target, farmers were left "incredibly globally exposed" to the policies of other nations.

"Far from creating uncertainty, a target actually creates certainty in an industry where much is uncertain," Ms Simson said.

"We could easily be subject to changes in tariffs, to carbon border adjustment mechanisms, to all sorts of different initiatives that other countries may apply if Australia does not put in place a target.

"That will punish farmers, because our products and our commodities are totally governed by global trading rules."

Mr Joyce has given Nationals politicians until Sunday to come to him with their concerns, which he would pass on to Prime Minister Scott Morrison.

Nationals Senator Matt Canavan, who is vocally opposed to a net-zero target, warned the Liberals the climate brawl "could get ugly" if the party's concerns were ignored.

Mr Morrison is under international pressure to bring strong climate commitments to the United Nations Climate Change Conference in November and has made a number of shrewd political moves to ensure Nationals politicians will have no option but to get on board.

Mr Morrison will put forward the plan as a Nationally Determined Contribution - a formal United Nations term for a climate target, rather than a non-binding statement - which doesn't need to be voted on by parliament, leaving disgruntled politicians such as Senator Canavan without the opportunity to cross the floor.

The final decision will also be made by the Cabinet and any Nationals ministers who are not in favour of the plan will have to give up their portfolio and sit on the backbench, due to Cabinet solidarity.

Mr Joyce conceded his party did not have final say on the plan, but warned the Prime Minister it was best for everyone to listen to the concerns of the Nationals if he wanted a "harmonious government".

Mr Morrison flagged the idea of increasing Australia's 2030 emissions reduction target, which currently sits at reducing levels by 26 to 28 per cent from 2005 levels, to keep in line with other developed nations.

But Mr Joyce said the proposal was unlikely to get past the Nationals party room.

"If you say I've got to be honest and say, well, what's your views on the room on that issue, I'd say no, I don't think that's going to happen."