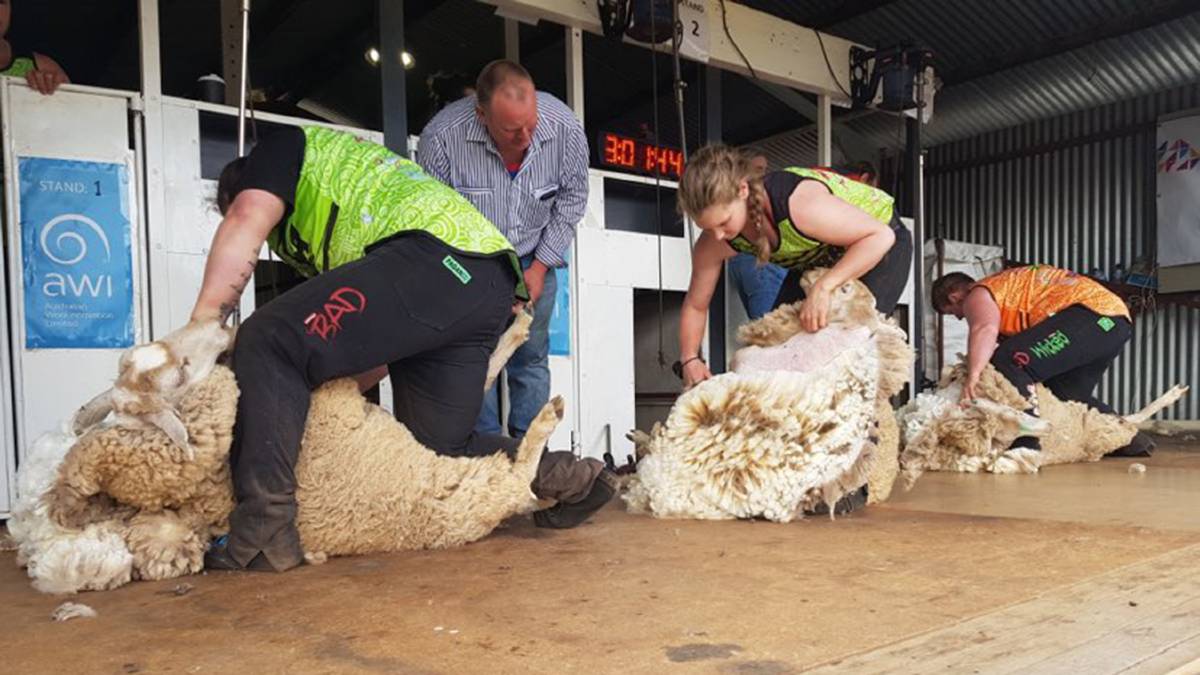 Nicki Guttler (centre) at the Cowra Show in the intermediate final in 2019. It was an all women final, which is believed to be a first.

Previously it was rare to find women in the shearing sheds, but nowadays they make up a large percentage of the workforce.

PREVIOUSLY it was rare to find women in the shearing sheds, but nowadays they make up a large percentage of the workforce.

Whether it be shearing sheep, wool classing or wool handling, women are making a move into the space in a big way and proving they have the expertise to make a career out of it.

One such lady paving her way in the industry is 27-year-old shearer Nicki Guttler, who grew up in the Riverina town of Lockhart on a sheep and cropping farm.

Six years into her career she is working full time shearing sheep, and has shorn in NSW, Victoria, Tasmania, SA and WA. In January she shore 300 crossbred lambs alongside her boyfriend.

"I never thought I'd be able to achieve that," she said. 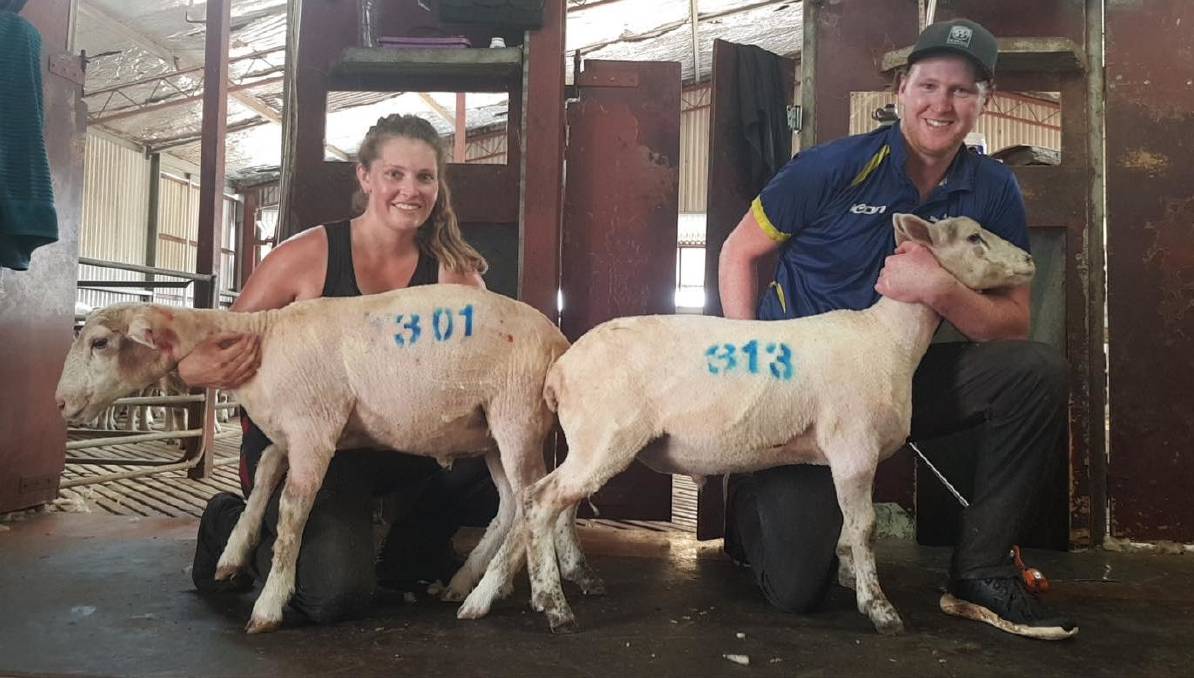 In 2020, she won the blade shearing teams event at the Golden Shears - the world's premier shearingand wool-handling championship in New Zealand - and had the privilege of competing alongside renowned World Champion blade shearer Allan Oldfield.

"That was an absolute career highlight - to come home with a Golden Shears ribbon is something not many Australians have, let alone an Australian woman, and least of all for blade shearing," she said.

"I also came 14th overall in my individual division, which was a huge achievement, and I'm really inspired to keep learning and competing. My next goal is to represent NSW at the Australian championships.

"In April 2019, she was in the NSW state final in the intermediate which is the top six in the state."

Shearing Contractors' Association of Australia (SCAA) secretary Jason Letchford said prior to the 1990s it was very unusual for women to be in shearing sheds in any capacity.

"Nowadays it is rare for a shearing team to not have female staff members. Many teams, the all of the 'board' shed staff are women, including the classer and the only one not female, is the wool presser.

"The industry is very keen to attract more into it and to encourage more women to graduate to the profession of 'shearing'."

Despite the visually seen rise in the number of women shearers, the Australian Bureau of Statistics (ABS) Census data from 2006 to 2016 shows only three per cent of shearers in Australia were female.

Involved in the training of shearers is Australian Wool Innovation (AWI) program manager for wool harvesting training and development, Craig French, said he has definitely noticed an increase in the number of female shearers training.

"Nation wide they represent 3 per cent, not long it will be double," he said.

"More women are growing in interest (in shearing) as they see opportunity and colleagues gaining momentum in the profession - the more females that take it up, the more that will be encouraged to give it a go."

Mr French said with such demand at the moment, contractors are calling out for any learner male and female wanting to have a go.

Australian Wool Exchange Ltd wool classer registrar Fiona Rayleigh said "your ability to make it to the point of being employable has nothing to do with gender" but rather your skills.

The reason there has been no quantifiable rise could be due to many women not classifying themselves as a 'shearer', according to Mrs Raleigh.

"Women tend to be qualified in wool handling, classing and shearing - a lot of them can do it all - so some probably classify themselves as wool industry workers or similar," she said.

"A lot of shearing schools there will now be females - it is a given, and it is important that we normalise ag positions like this for women." 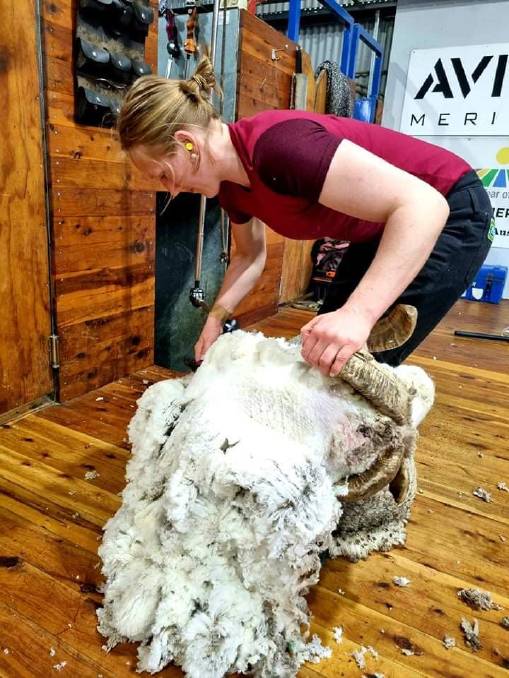 Victorian shearer Claudia Raleigh has the next goal to shear 300 lambs or 200 in Merino ewes.

Shearing for two years now, and based in Victoria working around the Geelong, Mortlake, Ballarat region, Mrs Raleigh's daughter Claudia said some women shearers may feel like they have to 'earn her stripes'.

"Previously working in the sheds as a rouseabout, I wanted to become a shearer because of the physical and mental challenge shearing provides as well as to make more than wool handling provides while still working in the wool industry," she said.

"I travel around with my partner, he says 'I am a shearer' while I might say 'I work in the shearing shed'."

For some it is not an easy thing to just say 'this is my occupation, I am a shearer", as being a female can at times mean you feel like all eyes are on you all the time in the shed.

Employed by Robbie Crouch of A Team Shearing, Claudia said while she has seen more females getting involved, she encourages other women wanting to take up shearing to get a supportive team that will help you when starting out.

A highlight for Claudia has been working in an all-female shed.

"It was a two stand shed, only another girl and I shearing and we had a female shed hand with us, so the shed staff were all female which was cool," she said.

"Coming into the lamb season I would like to shear 300 lambs, that is my next goal, or 200 in Merino ewes."

Keen on the challenge of shearing, 24-year-old Joanna Treasure of Billimari near Cowra has been shearing for 12 months and said she took up the challenge after people commented it would be "too hard".

"Once I learnt how to do it, I fell in love with it," she said. "I loved the challenge and grew to appreciate how many skills are involved - you have to stay calm, and there is always something to improve and perfect. 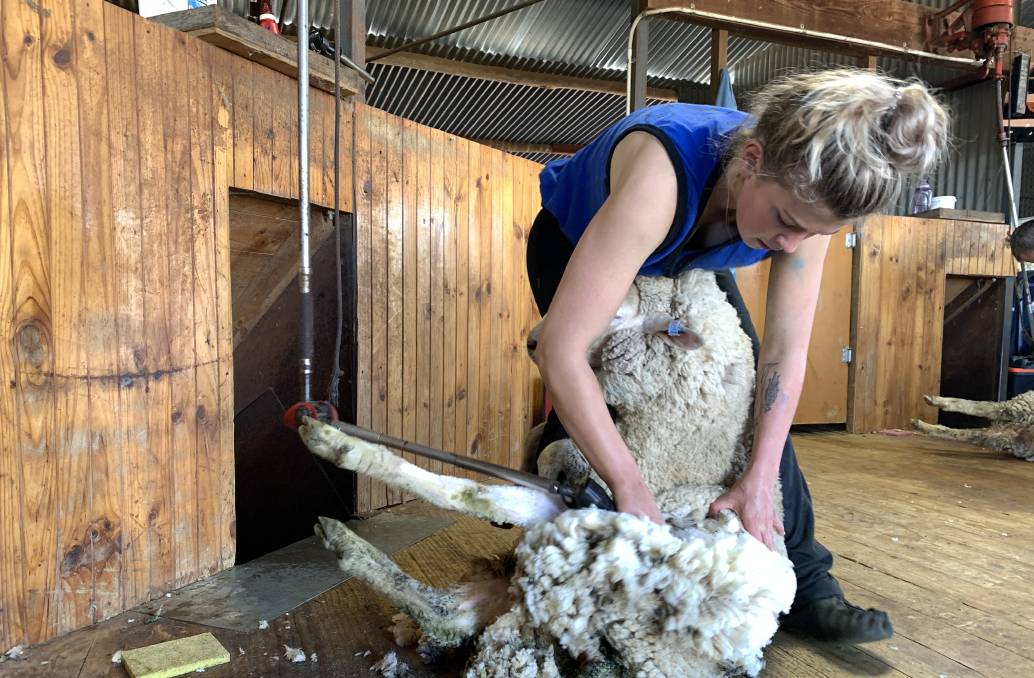 "I loved the challenge and grew to appreciate how many skills are involved - you have to stay calm, and there is always something to improve and perfect," Joanna Treasure, Billimari said. Photo: supplied

"I used to say I am a farmer full time and I shear on weekends, but once I did 200 I thought 'I can do that, I can call myself a shearer' - I don't think I could have been more committed to do it. I worked on-farm through the week and went every single weekend shearing."

Miss treasure said there needs to be a shift in the way people perceive shearers. 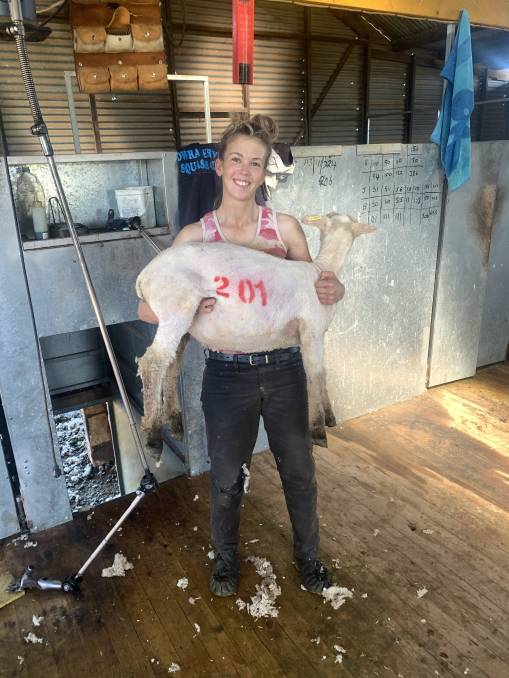 In October, Miss Treasure shore 201 in a day which included 143 Primeline ewes and 58 lambs and recently 200 lambs with more wool. Photo: supplied

"It is a worthwhile profession and although it is hard work, you can make a lot of money from it if you have your head screwed on," she said. "Industry has a long way to go in terms of advertising the inclusivity and making sure females have a go and will be supported when surrounded by the right people."

A fifth generation farmer, and working full-time on her family's mixed enterprise consisting of second cross lambs, Angus and cropping, Miss Treasure said "you are better off using adversity as motivation".

CHALLENGES FACED BY ALL SHEARERS

Whether male or female, people working in the shearing industry face a number of challenges and it is important woolgrowers and wool industry workers start having the crucial conversations to address them.

Australian Wool Innovation (AWI) is ensuring learner shearers are being supported by providing shearing schools to train upcoming shearers and making a $2000 tool kit available to those that do training with the company and get a stand with a contractor.

Passionate about ensuring the appropriate working conditions, safety and general accessibility to amenities, Australian Wool Exchange Ltd wool registrar Fiona Raleigh said the conditions in the sheds, in terms of toilets, sleeping quarters and working environments, in some instances are not being considered.

"Privacy, showering conditions, locks on doors for security at night - these things aren't just unique to women, men also have the right to a flushing toilet and proper hygiene," Mrs Raleigh said.

It is not everywhere though, with many woolgrowers upgrading and putting in the appropriate facilities and ensuring safety in all areas.

"Safety wise when we talk about shed safety it is about drag, catching pen size and flooring - the easy things to look at - but there are deeper, entrenched safety issues," she said.

"Safety at night, bullying and ensuring a pleasant working environment is important for employees wanting to retain staff."

The perceptions around 'you decided to be in the industry, you have to tough it out' and 'don't like it, get out of it' could be causing women to always feel cautious in what they can and cannot complain or comment about.

The increasing size of sheep is seen as non-gender specific but rather a challenge to both males and females, with shearers saying that if taught properly, with good technique and handling, that shouldn't hold anyone back.