Five years since his research scholarship and John Stevenson is still on the lookout for the right tools. 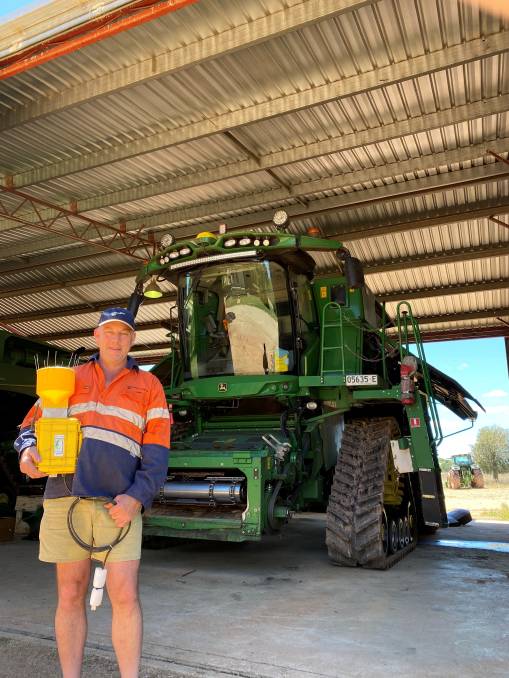 John Stevenson holds a Goanna tank level/rain gauge which is used to remotely monitor rainfall across the farms.

Five years after he was awarded a Nuffield scholarship to study the topic of plant available water, John Stevenson is still searching for answers.

"I learned it probably matters in Australia more than anywhere in the world, because we're so reliant on rainfed agriculture," he said.

"We are very good at managing plant available water, but what we're still not very good at is knowing what we've got on a site-specific basis at any point in time."

As Warakirri Cropping southern regional manager, Mr Stevenson is based at Orange Park, near Lockhart, southwest of Wagga Wagga, which he has managed for more than 20 years.

He said the ability to make profitable decisions about crop choice and fertiliser application depended on farmers understanding when, where and how much soil moisture would be available to a crop.

During his Nuffield travels Mr Stevenson came across microwave, electromagnetic and plant-based sensors that promised to allow remote real-time measurement of soil moisture.

Some have found a place in horticulture, but much of the technology is not yet suitable for use in broadacre cropping.

"There's an economic limit to how many soil moisture probes you can have," he said.

"One thing I find a bit confronting is that we're not using radar technology more to tell us what direction the rain came from, and the intensity. In broadacre we're talking 100-2000ha paddocks and getting a spatial awareness of your moisture on that scale is pretty hard."

ALSO IN NEWS:Goats a sure thing out west

Another complication is variability in usable soil depth - canola roots can only penetrate one metre into some soils, while reaching 3m in other parts of the farm.

"We've got to get better at matching what we're putting on a crop to what its potential is and basically, moisture is the main limiting factor," he said.

To collect more of that data, a network of 18 remote rain gauges and 10 soil moisture probes connected by a LoRaWAN - a low-power, wide area network - has been set up at Orange Park. Two gateways, capable of hosting 10,000 sensors each, cover the non-contiguous blocks that total 8300 hectares across a radius of more than 50 kilometres.

The usual rotation is pulses (faba beans, chickpeas or vetch) followed by canola, wheat and barley.

"For the most part we started 2021 really positively with some good soil moisture," Mr Stevenson said.

"We ran into quite a dry cold spell through April-May, and then had mice issues to boot everywhere, which were a challenge."

After choosing not to harvest the inaugural crop of Genesis 090 chickpeas that suffered from inadequate rainfall in 2018, this year's 160ha of HatTrick chickpeas has fared much better.

The chickpeas received a double rate of the peat inoculant, Nodulaid, before sowing in early June at a seeding rate of 90kg/ha with monoammonium phosphate at 70kg/ha. The herbicide program began with the pre-emergent Terbyne Extreme at 0.75kg/ha and was followed post emergent with Clethodim at 500mm/ha and Factor at 180g/ha.

The chickpeas received two anti-fungal sprays of Mancozeb and Spin Flo, and one dose of Vantacor to guard against damage from heliothis larvae. The crop looked a treat in October and Mr Stevenson hopes he'll yield two tonnes a hectare or more.

Harvest at Orange Park is now two to three weeks behind the usual schedule thanks to what he described as "the kindest spring that I've seen in 25 years".

I've never seen a spring this kind, but it needs to stop now - it's killing us with kindness. - John Stevenson, Warakirri Cropping southern regional manager.

"I've never seen a spring this kind, but it needs to stop now - it's killing us with kindness," he said.

About 15 per cent of the windrowed canola, which was yielding 2.8t/ha, was harvested before the recent rain that dumped between 40 and 125 millimetres across the farms. It could be another week before harvest can resume and there's likely to be further delays before they can start stripping cereals.

As well as Orange Park, the NSW aggregations include Willaroo at Goondiwindi, Boolavilla at Croppa Creek, and Cowabbie-Mukoora at Ardlethan.