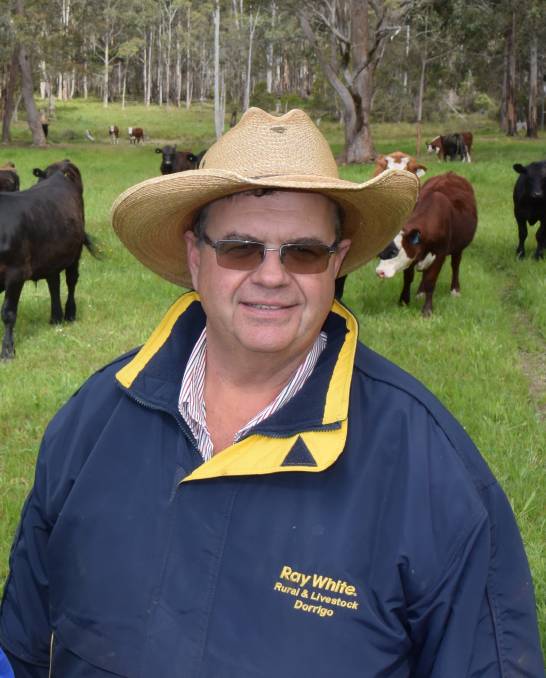 Livestock manager Tim Bayliss, Ray White Dorrigo, has a diverse range of experience within the beef industry but retains a passion for the led steer.

Ray White Dorrigo agent Tim Bayliss has accumulated an enormous amount of experience in the beef industry, starting on the family's grazing property at Mooral Creek via Wingham.

First and foremost a commercial and stud stock cattleman, always his work returns to a focus on the led steer - from breeding and selection through to production and showring presentation.

At Tocal Agricultural College he learned from beef's best, notably Bruce Urquhart - the name behind the perpetual trophy at Sydney Royal.

A stint at Santa Gertrudis stud provided early experience followed by time with Charolais and Shorthorn at The Bridge, Borenore via Orange, owned by the Pattinson family. At the time he was 19 years old and was selected to play tight head prop for the Molong Magpies.

Next he moved to Victoria, working with Limousin stud cattle at Collian Park, Flinders and Bruangil Park Grantville, and firmed his passion for the led steer.

In 1990 Mr Bayliss spent a year in North America, learning the ropes of their show circuit and developing a taste for rye whiskey and wheat beer, take-away food and slang lingo. He associated with Wulf Cattle in western Minnesota and fell in love with their "trusted" Limousin breeding program.

Back in Australia Mr Bayliss worked as a grader with Meat Standards Australia, based in the Riverina, helping to develop what is today the world's most trusted brand. He then moved to Elders as the national AuctionsPlus co-ordinator, developing training programs to skill-up staff with the aim of becoming livestock assessors. He counts time spent with Elders geneticist at the time, Greg Popplewell, as highly influential.

His other achievement include participating as a Royal judge in carcase competitions, and as a structural scorer for the Angus Society. He counts more than 100,000 beef carcases assessed under the MSA program during his career.

Six years ago he was head-hunted by Ray White Dorrigo to act as the agency's livestock manager and hasn't looked back, purchasing property locally and continuing to breed Limousin and Limousin infused cattle.