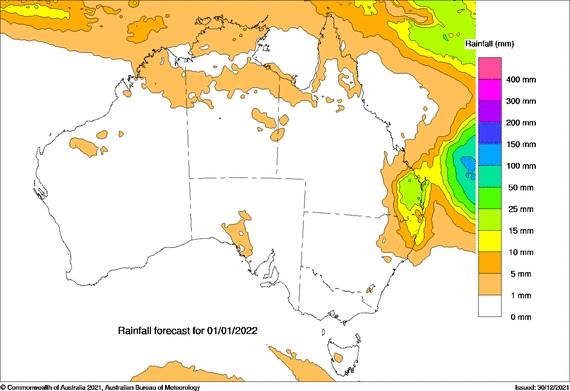 The Bureau of Meteorology's rainfall forecast for January 1, 2022.

From heatwaves in Queensland to dry lightning in South Australia, this is the outlook for the first few days of 2022.

Hot and dry are the words most likely to wrap up most of Australia's introduction to 2022, with limited rainfall expected across the nation.

Bureau of Meteorology forecaster Jonathan How said Queensland and the Northern Territory will see some rainfall, but nothing more than 20mm is expected.

In Queensland, it will be dry conditions for most of the state though, with only the South East set to see any rain.

"There will be showers across the south east of Queensland tomorrow, the risk of a thunderstorm mainly for inland parts of the south east, but we're not expecting a lot of rainfall," Mr How said.

Mr How said temperatures would remain cooler for the south east, but the rest of the state can expect a hot day with the potential for some thunderstorms and showers across far western Queensland.

In New South Wales, showers and thunderstorms in the north east close to the Queensland border are likely, and those thunderstorms could extend down the east coast towards Sydney and the ACT.

"We're not really expecting too much," Mr How said.

"It will be dry for central and western New South Wales [on Saturday], and getting hot as well across inland parts."

The story is similar for Victoria, with the forecast looking "dry across the state, and very hot".

Mr How said in the late afternoon a cool change should come through impacting southern areas, and there may be a chance of some high-based thunderstorms affecting areas across Gippsland, but he said there wouldn't be much rainfall in there - although there was a risk of dry lightning.

"[Victoria] won't see a relief from the heat until Sunday or Monday," Mr How said.

Looking picture perfect on the final day of 2021, #Australia! 🥳

Most capitals will be dry and warm to hot for #NYE, be sure to check the forecast and for any warnings before you head out https://t.co/Of6lj7S7gMpic.twitter.com/lf4NNXHMmF

Thunderstorms will be developing tomorrow for South Australia across the west and inland parts of the state, including the Eyre Peninsular and Kangaroo Island.

"Not too much for the south east of the state, but some thunderstorms - not expecting too much rainfall again, but could see some gusts, it'll be fairly hit-and-miss for the most part," Mr How said.

In Western Australia the story will be much the same.

"It will be dry across the south for [Saturday], just some isolate thunderstorms across inland and interior parts but the bulk of the activity will be across the Kimberley, but not expecting too much in the way of rainfall," Mr How said.

The Northern Territory could see some showers and thunderstorms though.

"In the NT, we are looking at showers and thunderstorms for the top end, but the heaviest falls will be right in the northern top end, but not expecting too much," Mr How said.

"We haven't really seen much over the last couple of days, but under thunderstorms you could get the odd 10 to 20mm or so.

"Acorss central and inland parts of the NT towards the south, it's looking dry and just the chance of maybe an elevated thunderstorm across the south but not much in the way of rainfall."

"The main impacts will be just a few showers for the coastal strip, particularly south of about Mackay, but we will see some gale force marine winds as well as some hazardous surf conditions with some strong easterly swell," Mr How said.

"For the most part it's mainly affecting those using the beach."

Mr How said the low will bring showers to the south east as the low moves south, however most of the showers will be "quite light" and not impact west of Toowoomba.

"We will see the low be quite slow moving and sit off the coast of Brisbane for a number of days, it's only really to early next week we start to see this low either move towards the north east New South Wales coast, or weaken offshore," he said.

"We're just keeping an eye on how that is going to play out, but under the scenario where it gets towards the coast, we could see some showers and increasing rain activity for the northern rivers and the north coast, this is more likely to be Tuesday/Wednesday next week.

"We're just urging residents to keep an eye on the forecast, the low is going to be very slow moving so it can be a little bit tricky to forecast exactly where it's going to drift off to." 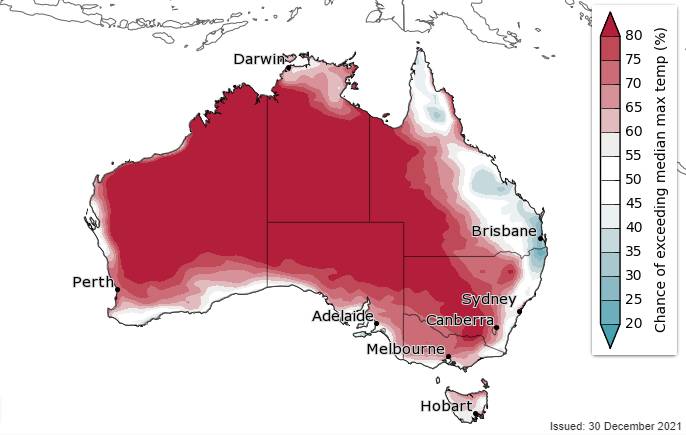 Next week Queenslanders will be heating up, with heatwave conditions across the central and northern regions.

Mr How said severe to locally extreme heatwave conditions are likely, with Rockhampton to hit 40 degrees and Cairns and the north east to see continuous days in the high 30s.

He said Birdsville will be the hottest town next week, with 45 degrees expected on Sunday and Monday.