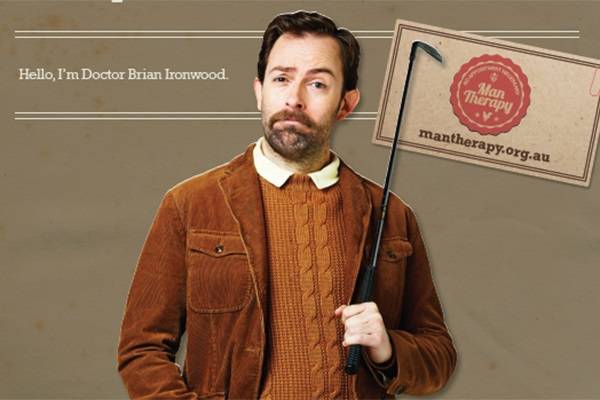 NEWS ads are urging men to take the bull "by the balls" and take charge of their mental health.

NEWS ads are urging men to take the bull "by the balls" and take charge of their mental health.

It's part of a new multi-million dollar "Man Therapy" campaign funded by the federal government that's urging men to take action on depression and anxiety - and reminding them a real man looks out for his mates.

Mental Health Minister Mark Butler said the number of male deaths from suicide in 2011 were almost twice that of road deaths, making suicide the biggest killer of Australian males between 15 and 44.

Mr Butler said the tragedy was most men did not seek help for their underlying mental health issue.

The Man Therapy campaign being rolled out by Beyondblue hoped to change that and get through to men using humour.

Based around on ads which will run on television, radio, print, online and social media from this week, the campaign stars a "man's man" character called Dr Brian Ironwood who urges men to "tackle the crap" out of feelings like anger, stress and anxiety using the manly techniques found in his online "shed".

The site also includes tips for those worried about a man in their life.

Beyondblue chairman Jeff Kennett said many men found it difficult to admit they had depression or anxiety because they associated it as a sign of weakness.

"Men can see support-seeking as a failure, but in fact it is the right and manly thing to do," Mr Kennett said.

"We have created mantherapy.org.au to change these attitudes and create a better understanding of good mental health."

He said if men didn't understand the signs of depression and anxiety, they were unlikely to know when a crisis point was reached.

"The fact is even the strongest men can and do develop depression or anxiety in the same way that they can develop a physical illness, but life can improve dramatically with the right action."