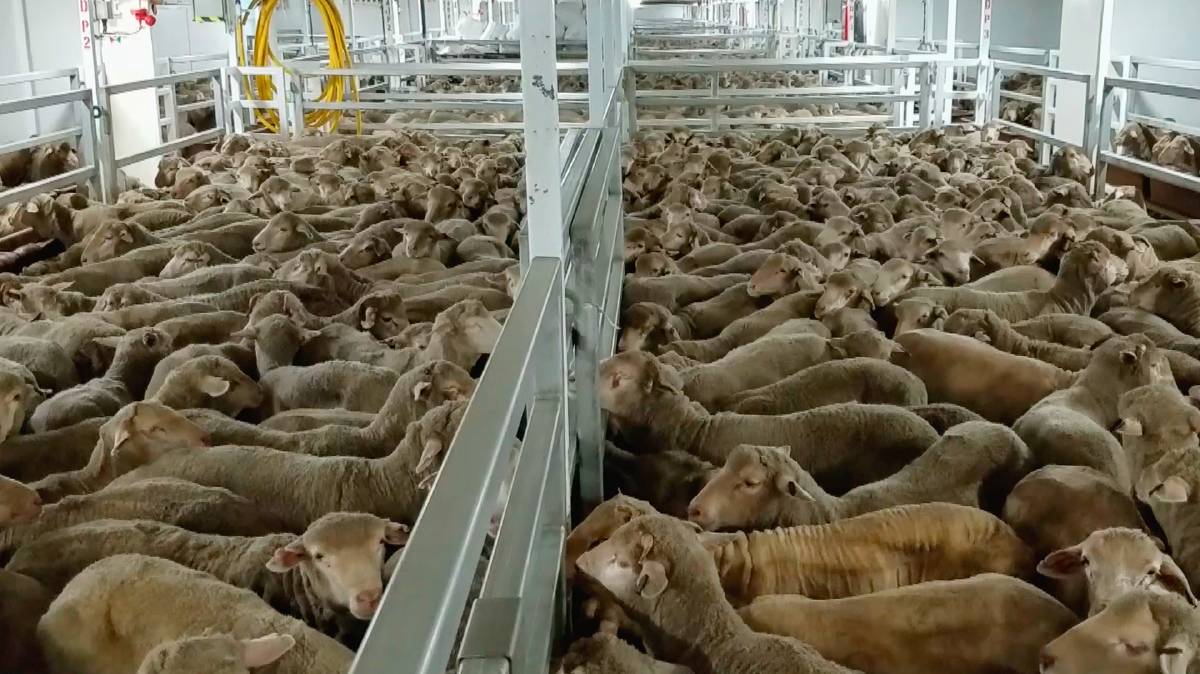 Anti-live exports campaigners are intensifying rhetoric and enhanced campaigning to have the trade terminated.

ANTI-LIVE exports critics are intensifying their rhetoric to have the trade terminated, with more secretly filmed video footage due for broadcast on 60 Minutes tonight, attacking the Middle Eastern trade.

Last week the current affairs program revealed video images of issues concerning the welfare of sheep exported from WA to the Middle East, mostly aboard the 2017 Emanuel Exports, Awassi Express voyage where 2400 died due to heat stress, igniting political action.

Industry sources have questioned some of the accuracy of the animal handling practices displayed in that broadcast video footage but it hasn’t stopped the public or political backlash.

Today on Twitter, 60 Minutes said it had now received more secretly recorded vision, “this time revealing the treatment of Australian sheep after they are offloaded from a ship”.

He also revealed a new whistle-blower hotline so anyone with video footage or evidence of animal welfare issues concerning live exports could report it to his Department for immediate investigation.

But industry leaders and politicians have long-questioned motives for delaying the handing over of any evidence of animal welfare issues to proper authorities, like video images, with new laws under consideration to expose that practice.

That comes due to concerns the images are instead being used to underscore sensationalist and emotive media reports, to support strategic campaigning by the likes of Animals Australia, which has a long-running agenda to ban live exports, along with RSPCA Australia, and stands opposed to all intensive livestock farming industries, along with sympathetic politicians.

The purpose of such campaigning is to make the video footage seem like standard industry practices are occurring – but industry sources have questioned the narrow focus and lack of diligence in subsequent reporting, where misinformation and misrepresentations of livestock handling are often left unchecked.

Response to the latest issue concerning sheep to the Middle East, with video footage supplied by a whistle-blower to 60 Minutes, again via Animals Australia, has largely ignored the overwhelming data that shows high level success and significant advances in more recent times.

“David Littleproud has thrown his Department and the live exports industry under a bus,” one political source said last week.

The Australian Livestock Exporters' Council (ALEC) issued a statement saying in 2017, 12,377 sheep died in transit out of a total 1.74 million head exported from Australia – recording a mortality rate of 0.71pc.

ALEC also said the range of livestock mortalities since 2010 was between 0.6pc to 0.9pc and was “trending down” but CEO Simon Westaway, in shaping up for the political backlash ahead of 60 Minutes, couldn’t point alone to the 99.3pc measurement rate and said “our industry is determined to achieve better outcomes”.

“Exporters work with the Department to manage the recognised risks associated with exporting to the Arabian Gulf in the northern summer due to the seasonal heat and humidity, but more needs to be done,” he said.

Industry sources also provided information and analysis made by an experienced stockman on Middle Eastern shipments, questioning the veracity of the video broadcast on 60 Minutes last week.

A document outlining feedback on that broadcast, of heat stress issues on boats to the Middle East, said sheep don’t create a wet sloppy floor or make a firm pad because their feces was all pellets, and suggested the sheep had been placed in a cattle pen “for dramatic effect” and that the pens had been hosed down, which was also against the rules.

“This creates a fantastic short term affects but sends the humidity through the roof an hour later and the rule book always says keep the sheep pad dry,” it said.

It also said the number of sheep crowded into the pens, as seen on the video footage, seemed odd, given there was 65,000 sheep on that boat and 75pc spare deck space while the sheep were also surging forward in the pens, in response to the presence of whistle-blower who was holding the camera, but was inexperienced with animal handling and should not have been in that area, according to the ship’s rules.

Last week Mr Littleproud’s Department said through a spokesperson that the regulator was not assessing the accuracies of the 60 Minutes program broadcast last Sunday.

Hi @AnimalsAus if you want a former Trade Minister to campaign with you for the phasing out of live sheep exports just let me know.

But one segment of the television report is coming under examination, where the on-board vet for the Emanuel Exports 2017 voyage where 2400 sheep died was accused of leaving the ship a day early.

Industry sources said that once the ship has docked at port, and unloading is underway, the official veterinarian can delegate responsibilities to the assigned stockmen, to manage any potential animal welfare issues.

A spokesperson for the Department said the vet leaving the boat a day early was “new information that was now part of a current investigation”.

“The Australian Standards for the Export of Livestock (ASEL) require the accredited veterinarian and accredited stock person to remain with the consignment until the vessel has completed discharging at the final port of discharge,” a spokesperson said.

“Footage provided to the department by Animals Australia relates to five voyages during 2017.”

In reaching out to RSPCA and Animals Australia, Mr Littleproud has said in the wake of the latest live exports controversy “there should be nothing to fear from transparency - let's let the light shine in”.

“I want to create a culture where whistle-blowers are comfortable coming forward and confident their information will be treated confidentially and taken seriously.”

But RSPCA Australia has been a source of deep mistrust for the Australian livestock industry for working strategically with Animals Australia, to try to ban live exports, where the ends justify the means and therefore considered incapable of sharing confidential and critical information with.

RSPCA Australia this week released strategic campaign material asking via email urging recipients to “help us by keeping up the pressure” and “if you haven’t already, email Minister for Agriculture David Littleproud”.

The electronic communication also provided phone numbers urging stakeholders to call the minister’s office of “contact your local MP to voice your outrage - and talk about it online”.

“Tell as many people as possible - don’t let them slip this under the radar,” the email said.

“Our sincere thanks to the thousands of you who stepped up to email, call and create outrage over this online.”

RSPCA has also written to Mr Littleproud’s Department and major live exporters demanding it be allowed an “observer - independent of government and industry - on at least the next eight long-haul live sheep shipments”.

“At this point in time, we are very concerned the Department is making decisions that do not reflect the gravity of the situation or the seriousness of the risks to animal health and welfare,” said RSPCA Australia Chief Scientist and Strategy Officer Dr Bidda Jones.

“The Department has already granted an export permit for the MV Maysora, which left under cover of darkness early Thursday morning crammed full with around 77,000 sheep and 9500 cattle.

“The MV Bader III, another livestock carrier with a similar capacity, was expected to arrive for loading in Fremantle around 4pm WST on Friday.”

The RSPCA campaign email said the Maysora left with “No change to stocking density” and “no other conditions”.

RSPCA also said “mortality alone is a poor indicator of animal welfare - as this recent evidence shows, many animals suffer terribly but may survive – the Bader has the worst mortality record of any current live export vessel”.

“It looks like it’s back to business as usual for the live exporters and it’s not good enough,” the email said.

“We need to make sure farmers and the public are not let down again, and that the welfare of these animals is properly monitored.”

Dr Jones said the animals on the Maysora are “enduring the same overcrowding seen on the Awassi Express”.

“It defies belief and common-sense that within a week of finding out about the appalling conditions that sheep are exposed to on these horrendous voyages, we could see more than 160,000 animals depart our shores, with no significant change to the standards on-board those vessels,” she said.

“It’s clear from the outpouring of concern we’ve received from the public that they no longer trust the regulator to act to protect the welfare of exported animals.

“While the vessel at the centre of that (60 Minutes) footage – the Awassi Express – has since been detained in Fremantle, the Maysora is now headed to Turkey via Egypt.

“These animals face one of the longest of all long-haul voyages – confined to these appalling conditions for up to 31 days and facing rising temperatures and potentially rough conditions at sea.

“And as with the Awassi Express, there is only one veterinarian on-board responsible for the health and welfare of over 86,000 animals.”

In reigniting calls to ban live exports, Independent Tasmanian MP Andrew Wilkie said, amid a rally in his state against the trade’s future, that “the worst offenders are these sheep ships travelling to the Middle East, on which animal fatalities are often way beyond government standards and records are routinely falsified”.

“The federal government had a chance to put in place a total ban on live exports in response to the latest outrage - but the Minister has failed at every step,” he said.

“What small measures he has announced are nowhere near enough and just shows that the government continues to kowtow to a small number of exporters.

“I’m pleased to join Stop Tasmanian Animal Cruelty and with ordinary Tasmanians to call for an end to this cruel trade.”

ALEC has declined to comment, saying it will make a broader statement in time.

An Australian Maritime Safety Authority (AMSA) spokesperson said they were – as of Friday - still waiting for the owner of the livestock carrier MV Awassi Express to conduct third party ventilation testing on the ship, before it can depart for the Middle East.

“AMSA will not renew the ship’s Australian Certificate for the Carriage of Livestock unless it is satisfied the ship complies with Marine Order 43, including requirements for minimum air flow across all areas of the livestock pens,” the spokesperson said.

“AMSA understands the ship’s owner, Awassi Shipping SA, made arrangements for a ventilation technician from the manufacturer to assess the ship’s ventilation systems on Wednesday April 11.

“AMSA understands the technician will be undertaking adjustment work on the ship’s ventilation systems prior to the owner engaging a third party to conduct comprehensive ventilation testing.

“This work is expected to take several days to complete.”

The Department said last week it was taking immediate action to add an independent department veterinarian to an upcoming voyage to the Middle East, for the Awassi Express.

“This vet will monitor and record the health and welfare of all animals on board, send back daily reports and images and will also be able to issue directions on the vessel to ensure the welfare of the sheep,” a statement said.

“In addition to this measure, the Department is moving to settle additional specific conditions on a forthcoming voyage to the Middle East to ensure that the health and welfare outcomes required under law are met, including: reduced stocking density by 17.5 per cent.

“Conditions will be designed to ensure the health and welfare of sheep on this voyage while longer term measures are developed for the industry.”

Before a shipment of livestock can depart Australia, the exporter must have a licence and an export permit from the Department and is required to outline how they will comply with Australian government legislation for the export of livestock.

Only after both an export permit and certificate from AMSA have been granted may a vessel depart with livestock on board.