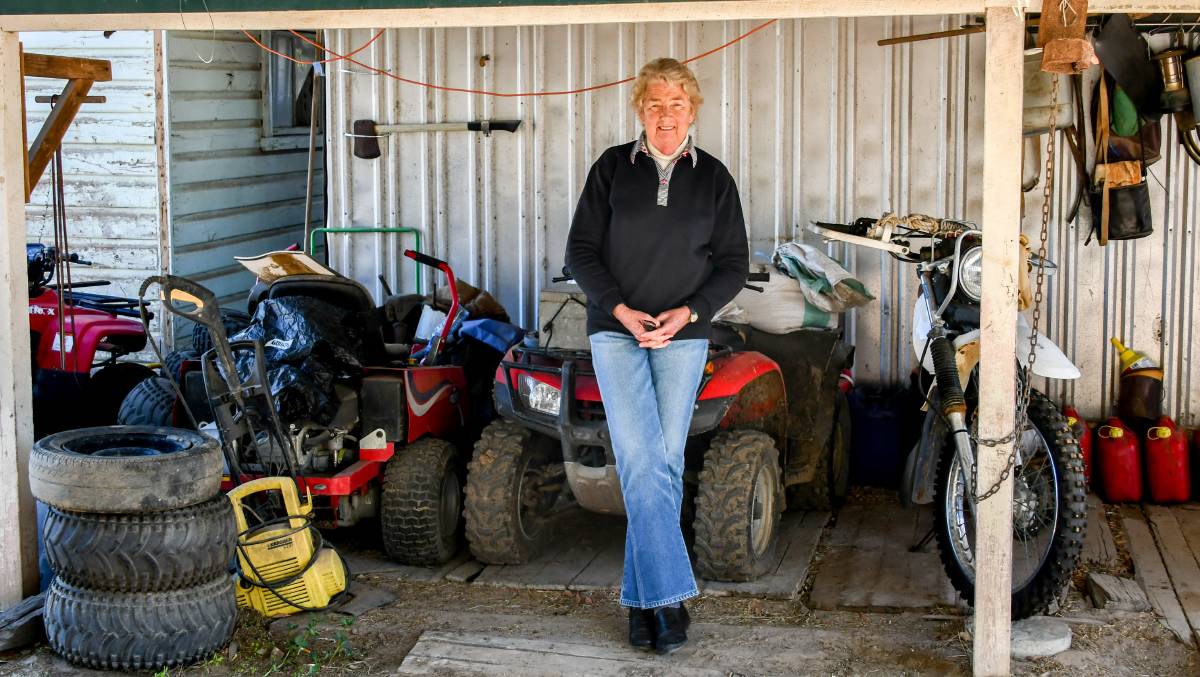 Jill Roughley of Walgett shared her story on The Land's podcast, Hear Them Raw.

The smell of a piping hot lasagne slips through the cracks of the oven in Jill Roughley's Walgett home.

Like most rural women, a home cooked meal isn't out of the realm for this Country Women's Association stalwart, but neither are a lot of things.

We haven't got a lot of time. That afternoon Jill will board her Kermit green truck loaded with fodder and travel around just under 20,000 acres to feed the drabs of stock that are holding on through the drought. 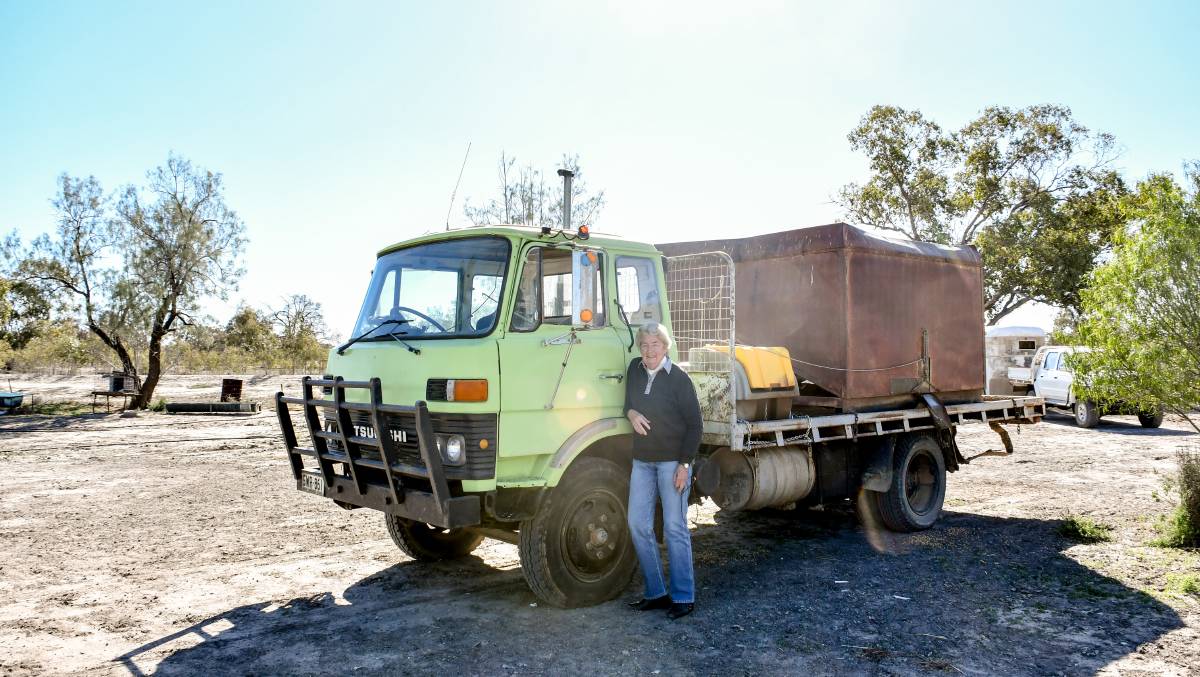 Jill runs all of the day-to-day operations on her own.

Just Jill and her trusty dog. Nobody else.

But, it wasn't always that way.

Like most bush kids, Jill's early education came from her mother, who taught her correspondence until sixth grade.

"Well she tried to teach me," Jill chuckles.

She later moved to St Gabriel's at Waverley in Sydney and spent the next few years there before becoming a boarder at Tamworth Church of England Girls School, now Calrossy.

It was a lot smaller back then.

"The head mistress knew every child in that school," Jill says.

"She could walk up and call you by name, she shook hands with every boarder at night to say goodnight to them and bring up something they had done during the day."

At intermediate level, or the third year of high school, Jill returned home. You would be forgiven for thinking young women in that era would be groomed for household chores, but Jill's parents found a different balance. 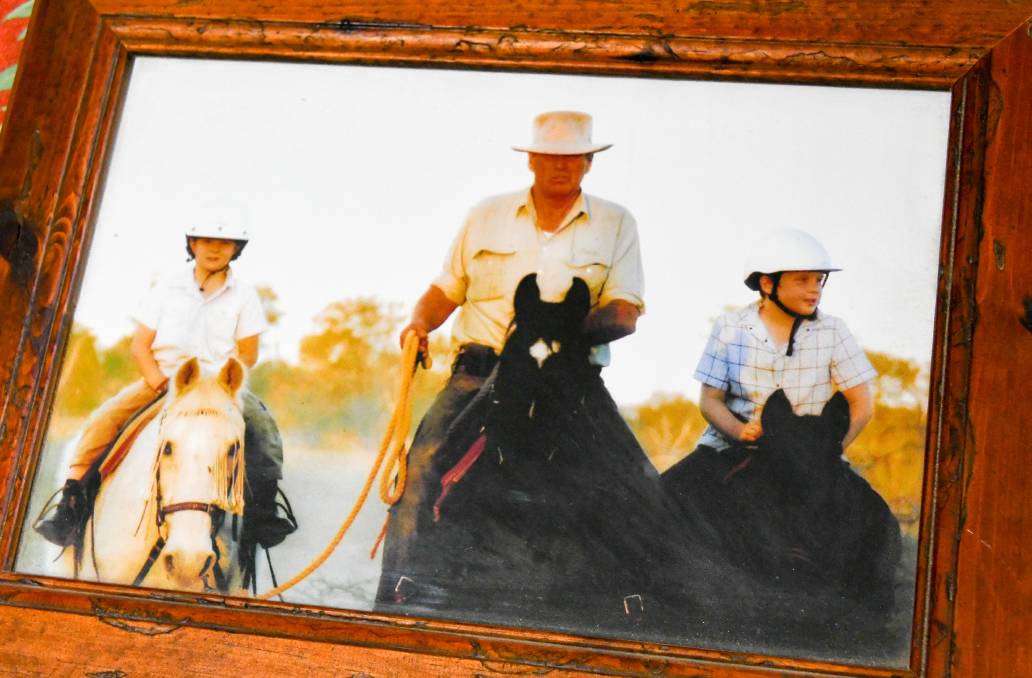 John Roughley pictured on his horse in the middle of the image.

"My mother and father were very equally minded, one week in the kitchen, one week outside," she says.

This became home, until she fell in love with a jackaroo named John who spent tenures in Warren and Longreach in Queensland before returning to help his father through the 1960 drought. 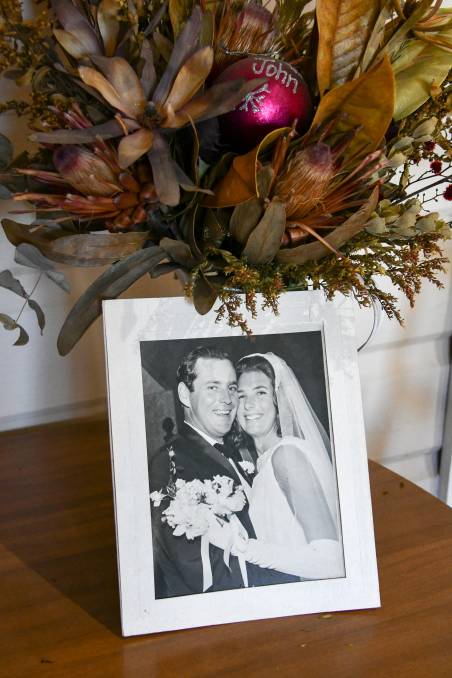 John and Jill were married in Sydney in 1970.

Building a life on the land

Around this time the couple purchased their own 14,000 acre sheep and cattle property on the NSW/QLD border.

But like any farmer will tell you, life on the land isn't easy. The year of 1973 is imprinted in Jill's mind.

"It started to rain one night and we got up the next morning and the river, which was normally two kilometres away from the house, we could see it out the window," she says.

"We had no telephone and the radio didn't work there because it was a steel frame construction so we didn't know whether we were the only ones wet or whether the whole world had gone under.

"We could hear this noise and we were out looking around and we were on our hands and knees, we thought it was a boat out on the water, and then we soon woke up that it was a helicopter over the top of us. 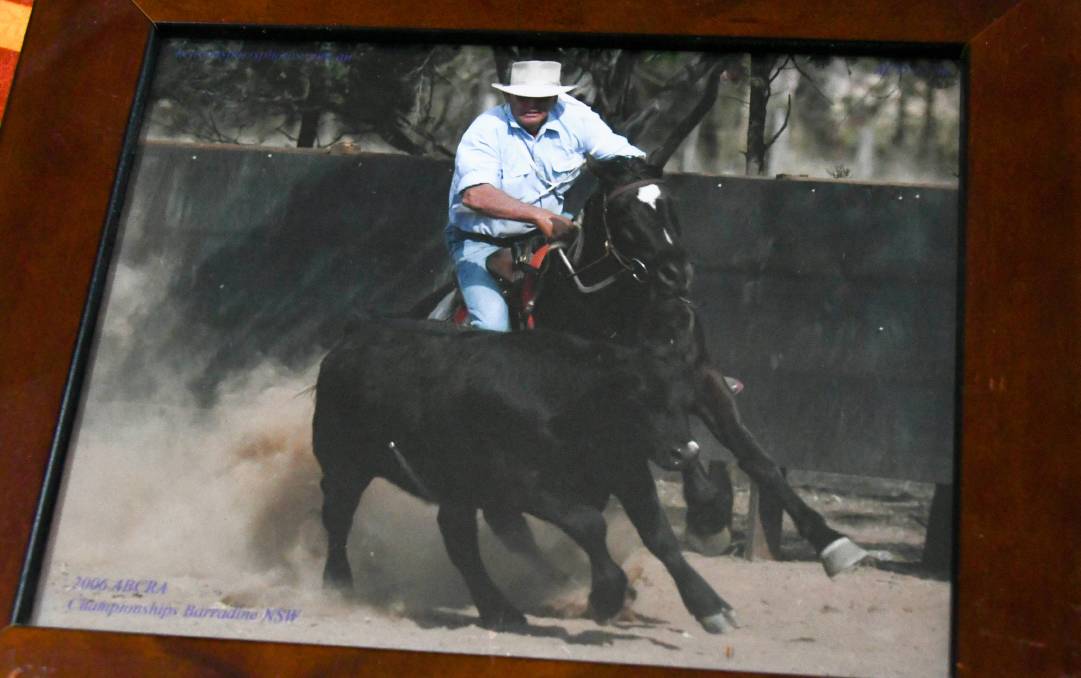 It was a record flooding event and while there family was safe, livestock were lost.

"We had 40 sheep caught down on a little island in the river and John road out and he took a woolpack and hand shears with him and they were bogged," Jill says. 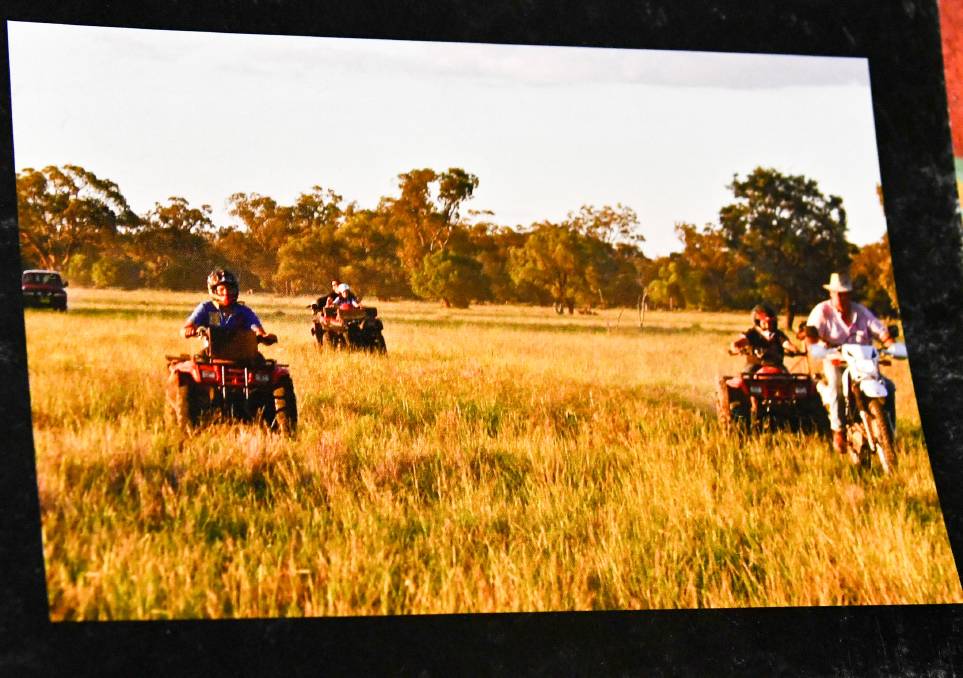 Their Walgett property in better times.

"He hand sheared them, pulled the wool up into the tree and shot them."

Seven years later they moved to Walgett and settled on their current property.

Jill and John had 47 years of marriage when he lost a long battle with illness and cancer in July 2017.

"He was a very resilient person too because even right until the end he said, 'Oh well, I've given it my best shot", and he had," Jill says.

Community members, friends and neighbours came to Jill's aid. Some just helped feed the dogs each day, others were there during shearing time.

A former employee, now working for the shire, still drives the 1963 loader and puts a new hay supply on the truck for Jill to feed out.

"If I need to I get contract help or get a man out when I'm drenching or doing the bigger jobs but otherwise I just do it myself," she says. 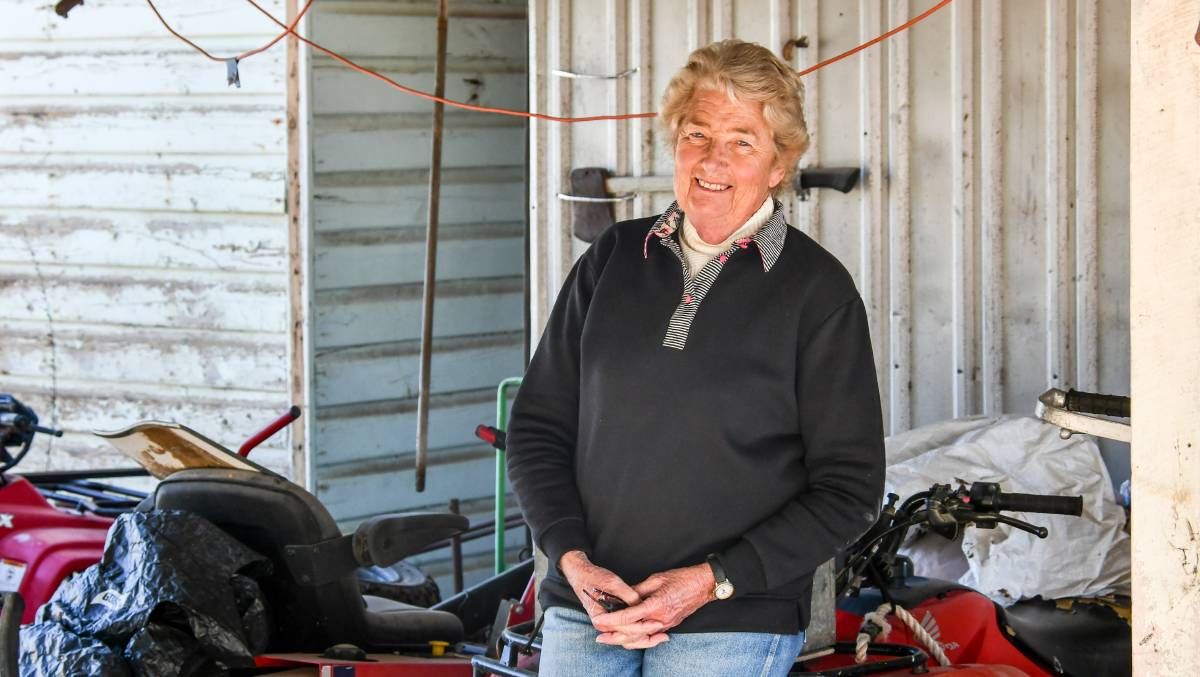 Jill says she wouldn't live anywhere else than in the bush.

"I've only got about a third of what it takes to probably even look like running the place. I do the daily feed and whatever needs to be done. I'm not a very good fencer though."

It's easy to see that Jill is a very independent person, but she isn't ashamed to admit life wouldn't have been as easy without the western bush spirit around her.

"John always said you only had to make it to the levy bank and someone would be there to help you, that's all you had to be able to do, and it's so true," she says.

"It's a very resilient region here. Everyone might not be the best of friends or whatever but if someone is in trouble, everyone pulls together.

"I've got neighbours that say, 'Just ring me'. Now I know they are busier than I am, but they would still be here. I'd only have to pick that phone up, and you know you are so fortunate if you have got those sorts of friends."

The bush is almost like an addiction to Jill. She can't describe it but something about it makes it impossible to live without. 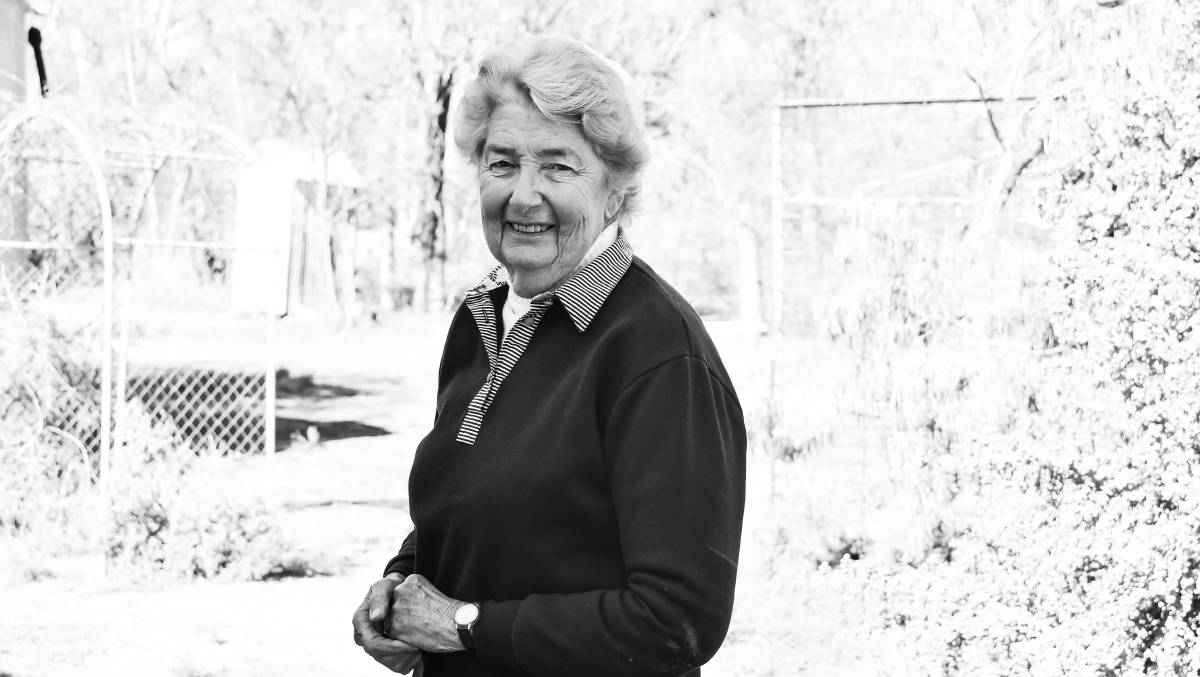 "It's not because it's easy work, in some ways you work longer hours than if you had a job," she says.

"It's just in your blood I think...it's heartbreaking at times, no good saying it's not."

During the 1960s, when Jill was entering her 20s, the feminist movement was gaining steam. She witnessed a change in opportunities for women, suddenly nothing seemed impossible.

"Women are doing as much outside as inside these days where once upon a time they did all the cooking and everything else but they didn't do the outside work as much," she says.

"When we were first married I can remember I was drenching sheep one day, we both were, and there was a vehicle coming and he (John) said, 'Quick, put that down, you don't want them seeing you doing that'. Now he would just say, 'Carry on while I just go and see what they want'."

Jill knows how to survive drought and floods, how to keep a property alive and above all else, how to make a damn good lasagne.

Her time in the kitchen is drawing to an end on this day, just like her parents recognised all those years ago, it was time to tend to her duties outside too.

But, she leaves me with some final parting advice from her own father, who taught her so much.

"My father used to, he would make up little poems," she says.

"And he had one particular one that he always taught us kids.

"It went; can't is a word that can beat us all. If you ever think it, you are sure to fall. Just remark to yourself, there must be a way, and you will mostly find it's just as you say.