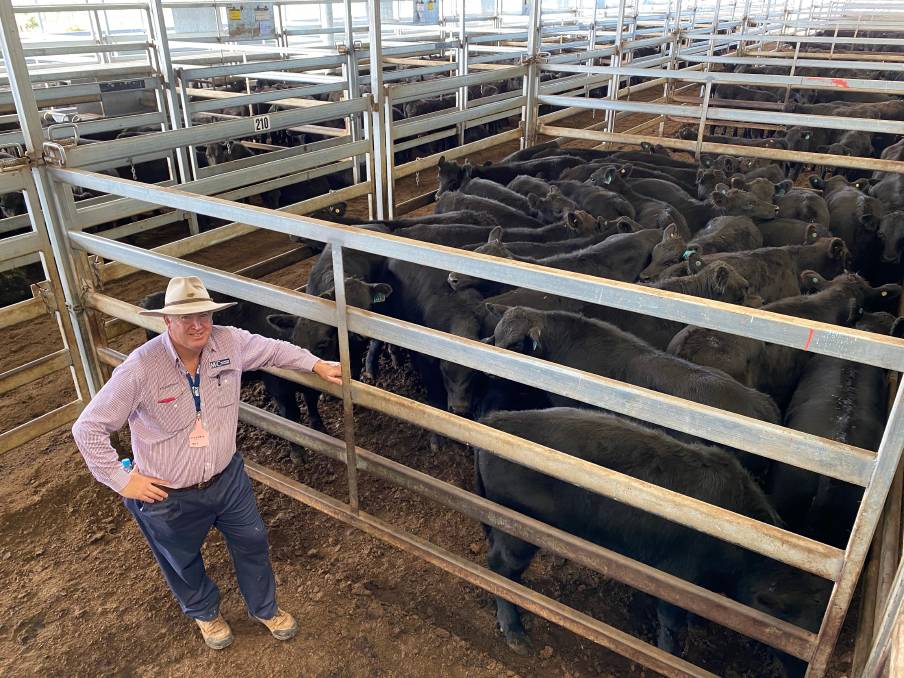 Lindsay Fryer, McCarron Cullinane, Orange, with a pen of Angus steers from Kinross Wolaroi School, Orange, which sold for $1275 a head at the CTLX Carcoar Autumn Weaner sale on Friday.

COVID-19 may have changed the way saleyards operate for the moment, but it didn't dampen prices at the CTLX weaner sale.

Across all weight ranges the cattle were dearer than the February special weaner sale at CTLX.

Most weaner steers tipping the scales at less than 200kg sold from $545 to $1020 a head and in cents a kilogram (liveweight) that worked out at between 404c/kg and 576c/kg, according to Meat and Livestock Australia figures. Bill and Rory Brien, Allan Gray and Company, Cowra, with a pen of 46 Angus weaners weighing 257 kilograms from M and K Fenton which sold for $1280 at the CTLX Carcoar Autumn Weaner sale on Friday.

The pen which made $1380/head were 353kg Angus-cross heifers sold by PM and A Chalker, Cowra, through Allan Gray and Company, Cowra.

"In general, there were lots and lots of good quality black weaners weighing in at 250kg to make around the $1200 mark, or either side of it," said Ray White Emms Mooney director Ben Emms, Blayney.

Today was also the first sale at CTLX implementing the new access restrictions announced earlier this week to ensure the safety of those considered essential to sale proceedings and the continuation of saleyards as an active and critical link in the food supply chain at this unprecedented time.

The StockLive online streaming and bidding platform also helped to ensure strong bidding throughout the sale, attracting 445 viewers and 30 bidders who participated remotely to secure a portion of the line-up of weaners.

Here’s how I’m following today’s ⁦@CTLX_Carcoar⁩ Autumn Weaner Sale. Not the same as being there, but you can certainly keep up with the sale trends. pic.twitter.com/qaQCGNoHAd

"There were a few disappointed people who were turned away when they tried to sign in, but the changes were generally well-accepted and the sale flowed really well," Mr Emms said.

"There were no ifs, buts or maybes and it really showed the saleyards industry can make it work if people give it a bit of thought, get with the program and stay on board.

"I thought that for a major sale like this it showed this can be replicated anywhere around the country and that we can certainly make it work over the ensuing couple of months."

The top priced pen at $1500/head was a line of 25 Angus-cross steers weighing 307kg which were sold by Kathryn Ashley through Elders. Taylor Meek, JJ Dresser and Company, Woodstock, with Robert Bowmans pen of weaner steers which made $1360 a head at the CTLX Carcoar Autumn Weaner sale on Friday.