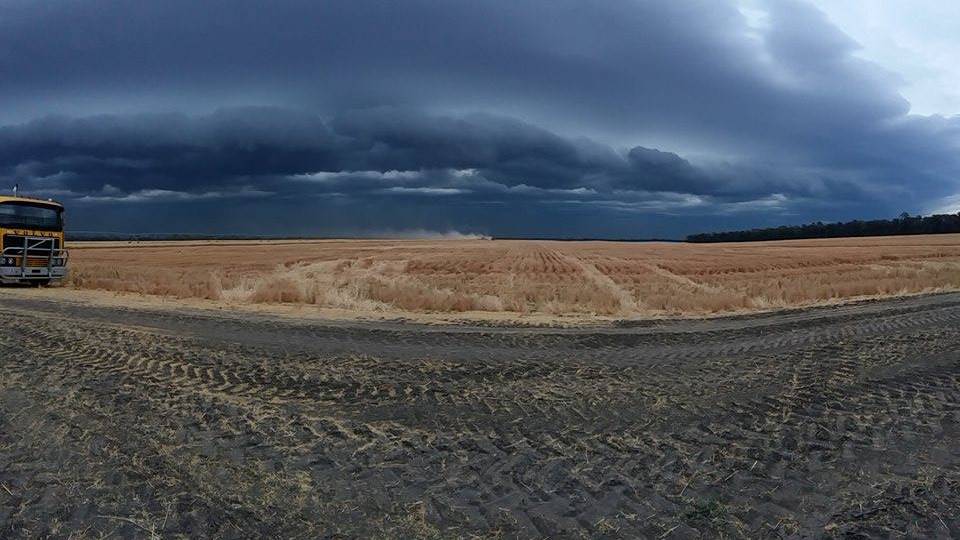 The wet is on the way, says the Bureau after a dry November in many parts of NSW and a lingering drought in Queensland that has seen little of the promised La Nina wet stuff. Photo by Todd Wilson during harvest at Miles, Queensland.

Fire and flood are all part of the summer climate outlook issued by the Bureau of Meteorology on Thursday.

The outlook was issued as NSW heads into a five-day heatwave, with many temperature records set to be broken and extreme fire conditions possible in northern areas, with harvesters on high alert.

While many have asked why the declared La Nina event has not delivered above average rain yet, the Bureau says rain is on the way - in bucketloads - over summer and warns many parts of eastern Australia may experience flood events.

"Australia can expect a wetter than normal summer, but bush and grass fires cannot be ruled out completely," it said.

An active La Nina event is expected to remain until at least the start of autumn. 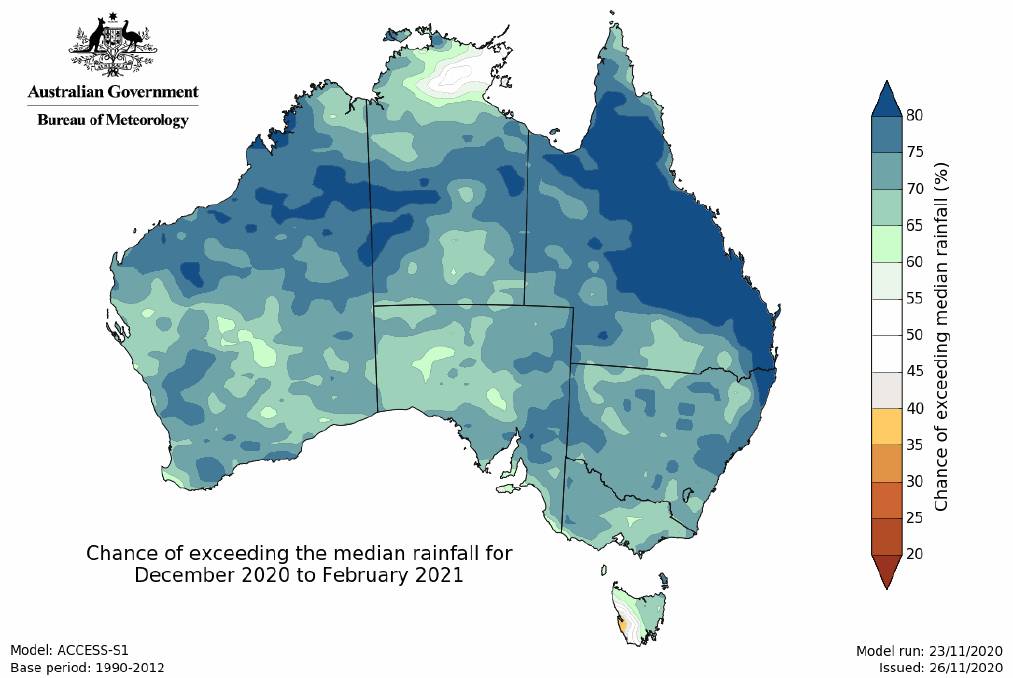 It's a very wet outlook for most of Australia over the summer period, according to the BOM summer climate outlook.

"While the last three weeks have been dry in many parts of the country - due in part to unfavourable tropical weather patterns - it does not signal a weakening of La Nina.

"Our climate outlook is the opposite of what we experienced last year in Australia. This summer, New South Wales, Victoria and Queensland are expected to see above average rainfall, meaning we face an increased risk of widespread floods.

Dr Watkins said that while the risk of bushfires isn't as high as last summer, fires will occur.

"There's a great chance of grass fires in some areas as recent rain and warm weather have led to vigorous vegetation growth. South eastern Australia is one of the most fire-prone regions in the world. Even short periods of hot and dry weather increase the risk of fire in summer."

Getting the harvest off has been a godsend, but the lack of rain in a La Nina event has many asking what is the reliability of climate modelling now in the age of climate change. Photo by @gmphotographs.

Dr Watkins said the outlook was also a reminder for communities to be prepared for heatwaves over the coming months.

"Every summer we see heatwaves across southern Australia. This summer heatwaves may not reach the extreme temperatures of recent years, but may be longer duration and more humid, which can still have a significant impact on human health.

"Daytime temperatures in summer are likely to be near average, but there will be periods of high heat combined with milder periods.

Northern Australia remains on track for an average to slightly above average cyclone season.

"On average, Australia sees 9 to 11 tropical cyclones each year, with 4 crossing the coast. The first cyclone to develop in the Australian region occurs earlier during La Nia years.

"People in the north of the country should prepare for tropical cyclones now. And don't forget tropical lows, which can bring heavy rainfall, flooding and cause significant property damage."

Mildura in the south of the state may also see its record November temperature broken at just over 45C, with over 44C possible on Saturday.

A contributor explained on The Land's facebook site why the declared La Nina event has not started in Australia yet.

He wrote: "the tropical activity train over the Philippines had prevented the cross equatorial flow, but the northern hemisphere activity was waning. This would allow a cross equatorial flow to develop. A stubborn upper ridge has been parked over the Tasman due to a stronger and out of season polar vortex still in place. Good news is moisture will now increase. Don't be too harsh on the BOM this is very complex to forecast particularly the polar vortex and upper ridging".