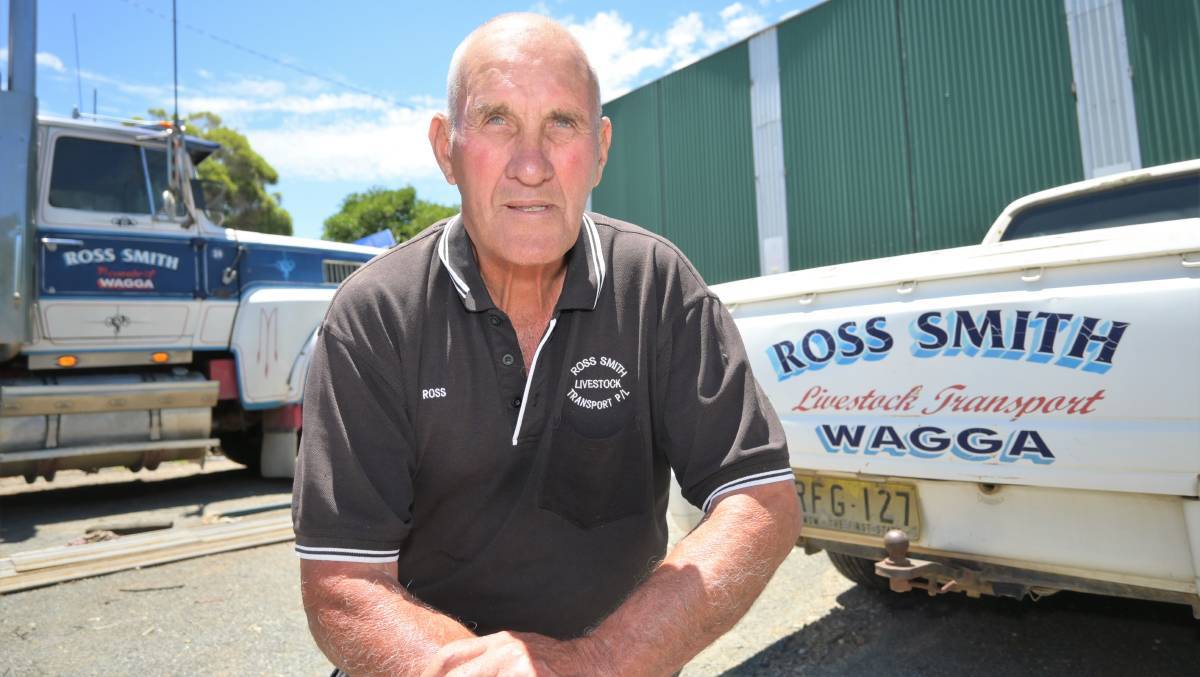 At one stage Ross Smith Transport did a load for every 1000 sheep yarded at Wagga.

Ross Smith of Ross Smith Transport is one of the Riverina's most well-known and respected livestock carters, having been in the trucking business for 55 years.

But the time has come for Ross to begrudgingly take his foot off the pedal and try his hand at retirement, his eight trucks and close to 15 trailers up for sale this week.

Ross ran the business alongside his wife of 52 years, Maureen, and was still travelling up to 3000 kilometres a week until recently.

At one point they had 20 trucks, but after a restructure they cut back to around seven drivers and a few casuals.

"We're just back to the local area, the 600km radius around Wagga Wagga now," Ross said.

"We were carting a few out of Queensland and Western Australia in the early days."

Ross has always been "mad about trucks", so much so that his wedding to Maureen had to be postponed so he could buy a new truck.

"It was a brand new Ford tray truck, then we got another tray truck going and then eventually we went into semi-trailers and kept going from there."

Ross started his transport career at 17-years-old, doing hay and grain carting before moving into livestock. But he started driving Chevy utes well before then.

"I've been driving since I was 11, I used to drive my mother into town," he said.

"My father broke his leg, he couldn't drive, so I did.

"In all my years driving I've never had an accident."

Trucking has changed a lot in the last five decades and Ross pointed to the loss of loyalty within the industry and a rise in the number of rules as being some of the most significant.

Naturally, retirement will take some getting used to and Ross has struggled to even take a few days off in the past.

"I did take a few days off once and I left my mobile phone behind, but I was looking for it all the time, so I put a little block of wood in my pocket so I thought I had a phone," he said.

When asked what he will do with his time Ross said there would be a lot of "trial and error."

"We'll be able to see my daughter and grandchildren who live at Maroochydore and we'll do a fair bit of touring," he said.

"So hopefully I can handle it, if not I'll have to come back and buy another truck."

But, there is one moment of his retirement which Ross is very much looking forward to.

"I can't wait until I'm sitting at home in mid-February when it's 46 degrees and I'll ring them at the saleyards and say 'jeez it's cold in here.'"