The Federal Government has extended the emergency water rebate scheme for another 12 months until June 2022 for farmers to make their properties drought resilient. Federal Water Minister Keith Pitt, who is in front of the Darling River, wants to get the money from the emergency water infrastructure rebate scheme into farmer's hands now. Photo: Supplied

The Federal Government has extended the emergency water rebate (EWIR) scheme for another 12 months until June 2022 for farmers to make their properties drought resilient.

It comes after The Land questioned both the federal and NSW government in last week's paper when the start date will be set so farmers can access the infrastructure funds. But neither government could give The Land an official start date.

Federal Water Minister Keith Pitt says his government was ready to go with their money tomorrow as soon as the NSW government signs up to the dollar for dollar agreement.

The NSW government announced last week its money was also ready to be delivered into farmer's hands.

But The Land understands that it won't be until July 1 before farmers can apply for the new round.

Mr Pitt said the money to clear the "over-run" of applications that each state government including NSW had allowed to be oversubscribed would be finalised this financial year.

In the last round, there were 7801 paid EWIR applications across Australia, of those 3280 in NSW.

But when the money ran out and the scheme was oversubscribed there were 2289 application across Australia that had not been paid, of those 845 in NSW.

"We will tidy up the mess and then offer another round," Mr Pitt said.

The federal government secured the $50m last October after it reversed its decision to scrap the program due to pressure from The Land, NSW government and NSW Farmers'.

Mr Pitt announced today that $25m of the Commonwealth's $50m would be available in 2021-22 along with any underspend from this year. 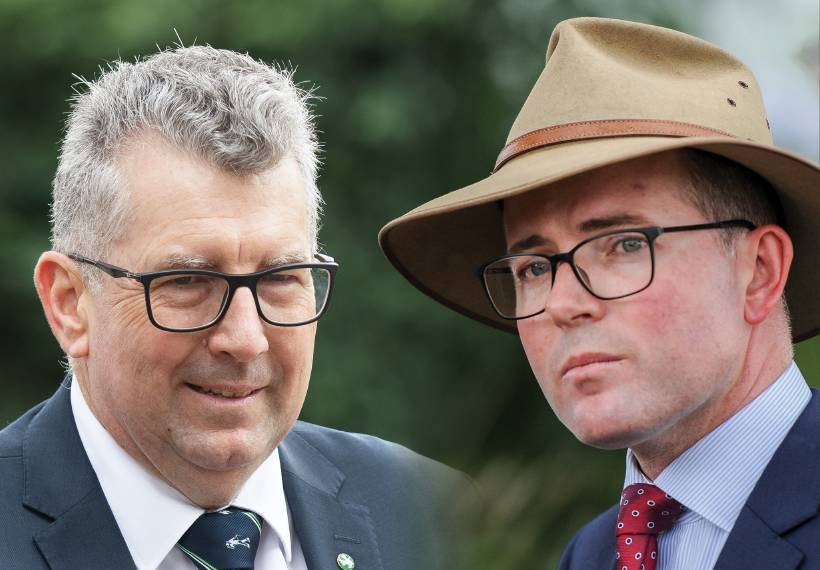 Federal Water Minister Keith Pitt and NSW Agriculture Minister Adam Marshall have said the money is on the table for the EWIR scheme, but there is still no date for its release. Photos: Sitthixay Ditthavong and Lucy Kinbacher

A week earlier the NSW government announced it would contribute $15m to unlock a total of $30m in new funds for NSW primary producers for the scheme - the additional $15m having been offered as a dollar-for-dollar promise last October by the federal government.

When asked whether the new round of funds would be available for NSW in this financial year, Mr Pitt said "there is still time before July 1 to get the schedule signed and the agreement done, I just need less letters that are cute and more letters that get to the point and agree."

Meanwhile Mr Pitt said South Australia was the first to sign up to the new round of funding.

"That will open a new round for them (South Australia), which is expected to be July 1. They also have numbers around 500 that need to be cleared," Mr Pitt said.

"The bottom line is that we are about getting stuff done and we will to give every opportunity to get this money on the ground.

"What we are looking to do is clear the overrun in the scheme... then reopen applications once agreements are signed dollar for dollar with the states."

Mr Pitt said the NSW government had stated publicly it would clear its "overrun" with their own funding and get reimbursed by the Commonwealth.

Mr Pitt added the scheme had been "a hugely popular program" that made a real difference for thousands of Australian farmers dealing with the devastating challenges of drought.

He said scheme could be used to fund small scale on-farm drought proofing water projects, including buying and laying pipes, installing water storage devices, such as tanks and troughs associated with stock watering and desilting dams and water bores.

"Farmers value the rebate because it helps them manage the here-and-now when it comes to keeping livestock watered and permanent plantings alive in a drought - but importantly it also improves productivity so they are better prepared for the next inevitable drought at some point in the future," Mr Pitt said.

"This program is about helping farmers being drought prepared and drought resilient.

Western Australia has also committed to co-contributions to make the rebate available to their farmers.

The scheme is administered by the NSW Rural Assistance Authority, where farmers are able to claim up to 25 per cent of eligible infrastructure costs, and is capped at $25,000.