There was a yarding of 1776 head at Thursday's store sale. 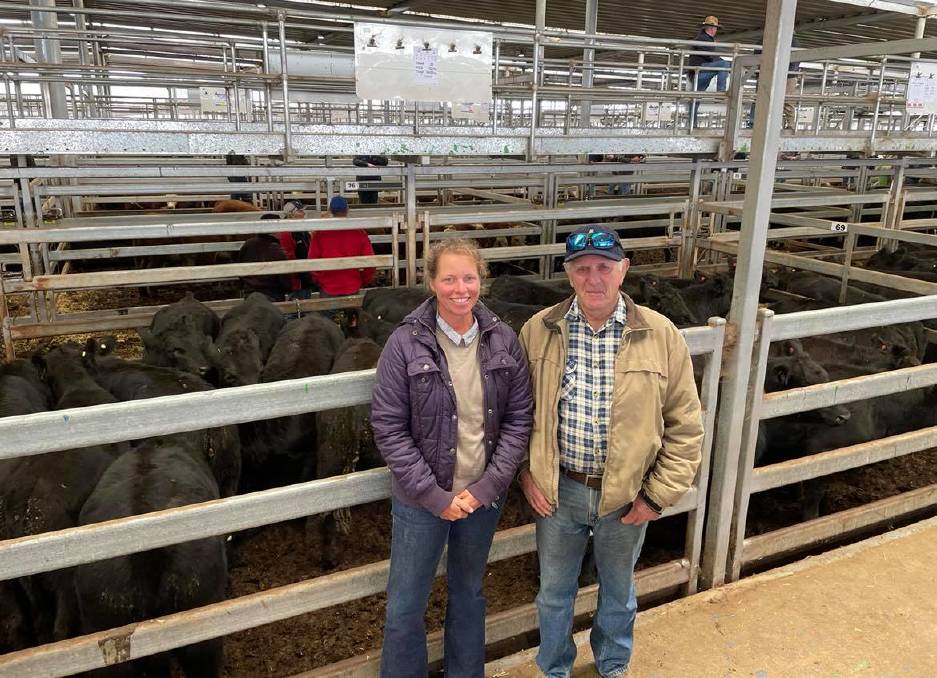 There were 1776 head of cattle yarded at Wodonga on Thursday with good quality runs of Angus calves making in excess of 520 cents a kilogram to 530c/kg.

Corcoran Parker agent Leigh McEvoy said overall the Angus calves were holding their own and there were also good Euro calves on offer making from 450c/kg to 520c/kg.

"Then we had some very good heifers, Euro cross and good Angus heifers were making in excess of 470c/kg to 480c/kg with the odd pen closer to 500c/kg," Mr McEvoy said.

The cows and calves sold from $1950 for Jersey cross to $3300, paid for two Angus from Glenavey, Barnawartha, Victoria.

Most steers in the 400kg to 500kg weight range sold from $1590 to $2250, paid for seven Angus steers, Ardrossan and Table Top Angus blood, weighing 477kg, from CJ and AE McGee, Silver Valley, Jingellic.

The same vendors sold 18 Angus steers, weighing an average 414kg, for $1930. They offered 89 steers in total and seven heifers.

This compared to the top price (for this weight range) of $1915 paid at the previous Wodonga store sale for Hereford cross steers, 383kg.

One of the feature lines of the day were 60 Angus calves, eight to nine-months, The Glen Angus blood, offered by Amy Taprell, Flaggy Creek, Thologolong, Vic.

It was the first time Ms Taprell had sold some of her cattle as weaners, with bullock fattening their usual operation, but she wanted to take advantage of the market.

Mr Lashbrook said they were selling two months earlier than usual to try and capitalise on the red-hot market.

Heifers weighing under 350kg sold from around $850 to $1715, paid for 17 Charolais weaners weighing 349kg, from Willawong Pastoral, Tallangatta, Vic.

Commission buyer Andrew Lowe competed strongly, alongside local interest from restockers, while Ravensworth were operating on some of the heavier lots.

The sale was conducted by Wodonga and Albury based agencies BUR, Schubert Boers, Corcoran Parker and Peter Ruaro Livestock.

Love agricultural news? Sign up for The Land'sfree daily newsletter