The NSW and federal governments have so far paid out more than $44 million in flood assistance after the March disaster decimated farmland and small businesses on the Mid North Coast. 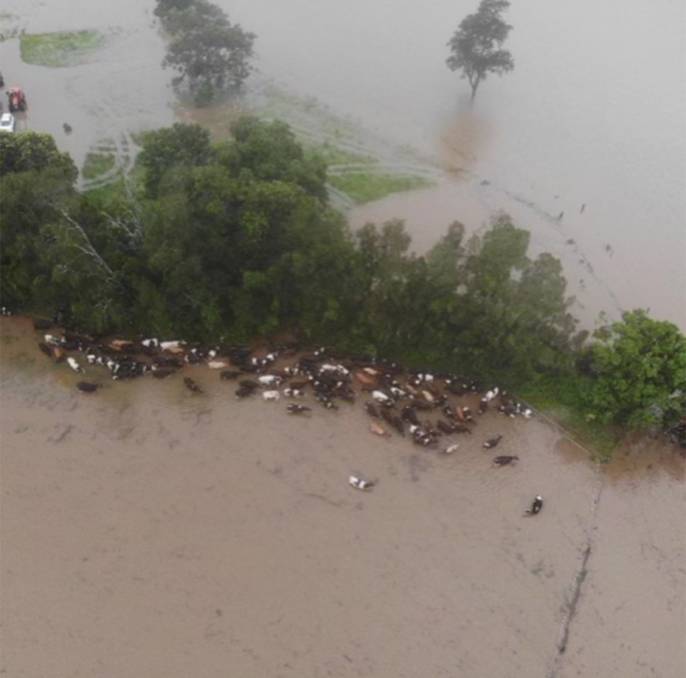 Three months ago Rachel and Sam Nicholson's dairy herd sat in water for four days on the highest part of their property.

The pair were devastated as their hard work "floated" by them at their dairy on Jones Island near Taree.

They lost up to 500 bales of silage they had in preparation for winter as well as 18 calves and two cows.

Fast forward to today and it's a different story. 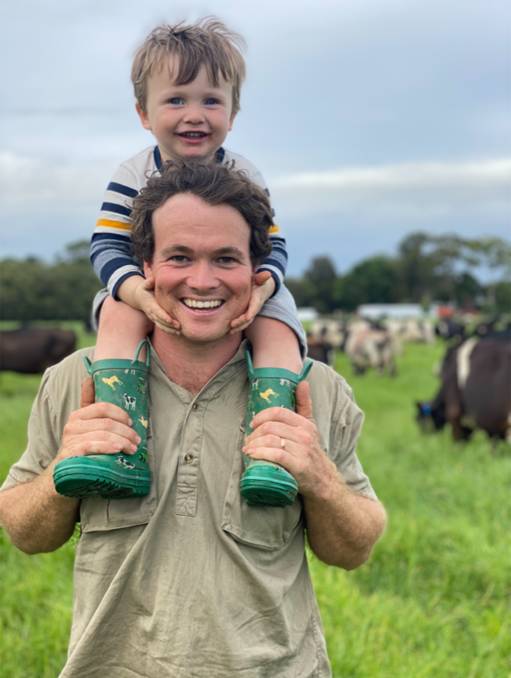 Sam Nicholson with his son Albert who is positive about his dairy future after the devastating flood event in March. Photo: Rachel Nicholson

While they are still in recovery mode treating animals for mastitis, fixing fences and laneways, Mrs Nicholson says their business will be stronger.

"We are looking to the future and will do what we need to do to be better prepared with the next flood," Mrs Nicholson said.

After the flood in March, they withheld from grazing for a month and were then able to plant rye and oats.

"The rye has grown so well in winter, we've had follow up rain since the floods, which has boosted pasture," she said.

The generosity of people meant they were also supported by donated feed from organisations like Need for Feed.

Graham Cockerell from Need for Feed said they had delivered more than 5000 bales on 150 truck loads to primary producers from Taree to Macksville.

The latest delivery of hay was donated from dairy farmers in Bega Valley who had survived the bushfires just 18 months ago.

Further north at Kempsey some producers have brought cattle back to their lower Macleay properties, while for others it's too wet to put a beast on their land.

Some have slashed their paddocks and managed to plant winter pasture, albeit only a quarter of what they normally do, while others can't even get a tractor on their property to clean up.

"There are many farms on the lower Macleay that are not at full carrying capacity because the country hasn't recovered yet," Kempsey Stock and Land agent Laurie Argue said.

"We had a couple of metres across the paddocks and even though it's been three months, it's not fully dry because we've had follow up rain." Macleay Valley stockman Leon Gray spent 10 days in a boat or waist deep in flood water to save 140 head of cattle and 25 horses. Photo: Samantha Townsend

At the time of the flood there were plenty of people who helped neighbours and strangers like stockmen Leon Gray and Shon Crotty, who dived into floodwater to cut fences and push stranded cattle through or walk animals kilometres to higher ground.

Looking back after the floods, Mr Gray said he would do it all over again to help someone in need.

"It would have been nice to get there a day earlier as it would have enabled us to get more stock out but you always pitch in where you can," Mr Gray said.

The NSW and federal governments have so far paid out more than $44 million in flood assistance after the March disaster decimated farmland and small businesses on the Mid North Coast.

NSW government figures show that of that primary producers in the local government areas of the Mid Coast, Port Macquarie-Hastings and Kempsey Shire Councils have accessed $12m in flood recovery grants while small businesses have been paid $1.7m.

As of June 10 there has also been $30.5m paid out in Commonwealth Disaster Recovery Payments, which was the $1000 cash grant to affected households.

There were 27 homes destroyed by the floods and 2705 residential properties damaged.

Meanwhile Rural Aid Australia has donated around $350,000 to 350 producers in $1000 cash grants that was generated in their flood appeal. They also did fodder drops and organised a team of 20 volunteers and staff who spent a week helping producers in the clean up.